Born in Buenos Aires in 1949, Ricardo Bartis, who is one of the major figures of the Argentine theatre, took on the challenge of building a living theatre in the devastated cultural center that the dictatorship left. The experienced director created a generation of actors including some of the best exponents of the current Argentine theatre. He created the Sportivo Teatral, which is located in the Palermo district. It is a real bastion of a theatre that comprises a sovereign place in its territory and that endures the hardships of consumption, “being categorized as a non-financial production.” In this interview, which takes place at the Sportivo itself, Bartis makes reference to the external—and to his own—ideas about the director’s work, from both critical and direct points of view. He also refers to the actor’s decisive role, to the spectators’ place, and to his latest show starring a bizarre cast of deceased actors.

The Director as the Generative Force of Stage Language

To Ricardo Bartis, the role of the director is essential for the production and articulation of theatre language. “’I’m not talking about THE director, but of a special one who is willing to create a language… from a hypothesis linking the strengths of the scenes, instead of offering only the possibility of taming them.” One of those central forces is the actor who, in Bartis’ opinion, is almost like a shaman. He goes on: “…the vacuum is the play that is going to be formed from the scenes, from where the heartbeat of the performance has to spread; it has to be an actor who can adapt quickly, who should be smart and able to follow the language and its complexity (not the play). The actor also strives to deliver a poetic event on stage, and to make the audience (who consciously accompany the events) participate in it.”

Bartis also states that “the viewer is used to a comfortable seat in a representational kind of theatre. The industrial system itself requires the separation of areas, of a sort of story where the bodies and their drive lose autonomy. A story where you cannot engage in discussion with the production system: I don’t like to watch a play from the 17th row of the official theatre. I like to see the actors’ sweat; I like a kind of theatre that has a more retiring perspective, that is addressed to a minority.” However, other theatres are more subject to the straitjacket of the character, and to the psychological matter that tries to be as similar as it can to the current model—for which Bartis proposes a new model: the director plays the role of the producer, who reduces the costs of production as window dressers do (you may be truly talented at it and earn a lot of money). Bartis stresses that into that specific model of the theatre world, “actors, acclaimed authors and directors have to pay a toll,” due to the fact that there is no place for esthetic upheaval… “It’s something similar to manufacturing refrigerators (you’ll need them if you want to cool your champagne).” He concludes with further experiences: “They’re moving us aside with this ‘post-dramatic’ theatre, legacies from anemic cultures in which it is forbidden to think in a different manner. Our theatre is more vivid and, I feel, closely connected to the River Plate traditions.”

The Beginnings. Restoration in the Aftermath of Dictatorship

Bartis affirms that the military dictatorship created a void and the absence of linkages: “During the post-dictatorship era, new arenas spawned, bringing about new forms of communication and an innovative practice of stage direction, a different management of light, space, color, and staging devices. It created a vast new form of pedagogy.” Ricardo Bartis himself played a leading role in these changes. His play Postales Argentinas (1989) consolidated said transformation, and became an iconic performance of Argentine theatre. Postales paved the way for new esthetic and ideological possibilities that broke away from the standard guidelines of naturalism and realism, which were deeply rooted in Argentina’s theater scene.

From his perspective, the delegation of directing duties to other trades implies risks, given that “as part of the creative work it is necessary to apply a horizontal approach in some areas and a vertical one in others.” In every rehearsal, the director “has the ultimate responsibility of bringing out the poetic personality of actors: that’s where new language must be created! If this is not accomplished, there’s no chance for the accrual of stage elements needed to navigate the narrative, which in turn entails underlying narratives and questions to be answered.”

“I direct all the time, in class, and here… whoever directs is the one who sees the space and has ideas, but must at the same time have a system of thought: a theatrical intelligence of sorts; not standard intelligence, otherwise any intelligent person, an intellectual for instance, could do theatre, yielding intricate results as we have seen. Theatre is a complex form of art, highly complex… if not it would be an activity for… well, it would involve a banal way of conceiving direction.”

The director of Sportivo also stated that besides dealing with artistic concerns, the practice of directing is related to survival: “the director adjusts to the sets of rules and precepts associated with prestige, which are stipulated by the cultural establishment, which often refers to non-mainstream circuits for new outlooks for renewing its own ideas”.

Towards New Work in Stage Direction

Bartis’ plays always raise great expectations. The next object of his theatrical exploration is violence: “I have some hypotheses on this theme; I have to sit down and analyze them, but I’m a little lazy, lacking will and enthusiasm… One must dive into things; there’s a sense of fundamental autonomy derived from movement, but it sometimes loses its strength—not the belief itself as much as the drive that gives momentum, but… it will come eventually… it will come. As time goes by, I feel more and more detached from words, I only believe in work… I think one needs to emphasize the ephemeral nature of theatre because that is where its powerful experience resides.”

La máquina idiota [“The Stupid Machine”] is the latest play directed by Ricardo Bartis; the action is set in Buenos Aires, at Chacarita cemetery, which is adjacent to the official pantheon of the Argentine Actors Association. According to the program of the play, in that ghostly place, growing “as if it were ivy, there has been a society for minor show business personalities. In that place, a recurrent order directs them. Claims proliferate, and a rough melancholy full of suspicious memories and strained love affairs invades them. However, destiny has called them to the stage once again: the union has called for October celebrations.” These bizarre actors from beyond, then, are trying to prepare for that occasion: Hamlet.

For several reasons, the choice of Shakespeare´s greatest work for this fictional foray does not surprise us: Bartis had already staged Hamlet by the early 1990s. He proposes an interesting new recycling of the text by integrating it as a part of a larger project: a parodic and fragmentary insertion of a classic, with local quotations, sayings and speeches, some of which are of a mythical political origin and are always downplayed by humor.

Within the framework of La máquina idiota, the director asks himself key questions that are of great importance: “Why are the dead and the actor the starting point in Hamlet?” They both are bearers of a truth. According to Bartis, the language of the dead “is the grounding element of politics.” (In the Argentine context, marked by the people disappeared in the military dictatorship, this “language” entails a special fate). “The actor is and is not at the same time, which is inherent to acting. Hamlet is trapped in his heritage, and that heritage kills, corrupts…”

But what about the common heritage of the Argentine people? What about their myths and origins? “Argentina is always on the fence. We’ll see what happens, maybe we’ll get that glorious fate which has been cut off,” says Bartis. In La máquina idiota, an English character, who is frequently asked about Hamlet’s translation, spits out: “I should have suspected a nation that sets up as a myth, a goal scored by a hand, and enjoys it!”[i]

Among his many successes, what Sportivo’s director has achieved in this latest show is to emphasize the ephemeral nature of the theatre plays by using the fact that the play involves its own birth and death. This is an axiom of the theatre that La máquina idiota deepens and repeats by displaying the acting power of the dead, as if it were “a strength that comes and demands.”

[i] This refers to Maradona’s goal in the 1986 World Cup quarterfinal match against England, scored by the so-called “hand of God.” 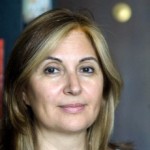 [1] Halima Tahan Ferreyra is a writer and critic. At present she holds the position of director in Ediciones Artes del Sur. She is curator of the program “Rituals of Passage” in the Complejo Teatral de Buenos Aires. In Cordoba city, Argentina, where she graduated from the National University, she worked as a professor at the National University of Córdoba´s Art School. Her articles have been published in numerous books and magazines in her country and abroad. She has served on juries for national and foreign theatrical awards. She is a member of the editorial board of Critical Stages (IATC).