Dazzling actress and outstanding theatre director, Mónica Calle has run the company Casa Conveniente for more than twenty years. Named after the convenience store that used to be in the location of its first home, Casa Conveniente lauched in Cais do Sodré, a charmingly ruined red-light port district with a mix of college students, with a blasting performance for the Portuguese conservative theatrical context (The Foolish Virgin, Rimbaud, 1992). Since then, Calle has pursued the aim of working from / within the margins of social, urban and artistic spheres. Interested in themes that regard interpersonal connections, in particular, loving relationships, her performances bring forth intensified bodies on stage, in particular, the feminine body, articulating performance art informed strategies with rereading of Western 20th century classics. In the last couple of years, Cais do Sodré has been entirely gentrified which pushed Mónica Calle to a new home. In 2014, she found her way through the city to Zona Jota, where she premièred A Good Soul (December 2014), renaming the company with a subtitle: “non-surveilled zone.”

Your last production, A Good Soul—an original play by Mário Luís Lopes inspired by The Good Soul of Szechuan, by Bertolt Brecht—ends with an interruption. This production is significant as it weaves your personal history with the history of your company as well as with Brecht’s text. What does this interruption mean?

Is it because it is not a performance venue? [Casa Conveniente’s new home is a ruined apartment with no windows or heating].

Yes, it’s a public housing apartment in a residential area in the outskirts of Lisbon that belongs to the municipality of Lisbon (Zona Jota). It was insanely violent to rehearse and perform in those conditions, in this unusually cold winter, as much as it was difficult to deal with a very long text, with its many versions. I cut it along the way, accepting the inevitable impossibility of reaching an end.

May it be also a beginning?

One line of the text illustrates perfectly what happened: “nothing was like I had imagined but much more alike to it than what I had imagined.” When I first thought about this performance I asked Luis Mário Lopes (winner of the SPA 2014 prize for new dramaturges) to write a text based on The Good Soul of Szechuan and J. P. Simões to compose the songs (songwriter and singer), I thought of the work as a restart for the company.

Did you start with the place or the text?

I started with the place. I have been planning to move to Zona Jota for three years, just before we left our previous venue at Cais do Sodré, which was when we stopped applying for state funding [the company was suspended for two years]. I wanted to move smoothly from one place to another.

Why did you choose that place?

It all started in 2009, when actor Amândio Pinheiro and myself first developed a project with the prisoners at Vale dos Judeus. Some of those prisoners finished their sentences around 2011, and started working with us at Casa Conveniente. Curiously, they were all from Zona Jota. So our connection with the area is first of all affective, through people. At the time, Cais do Sodré was going through a severe gentrification process [today it is one of the Lisbon’s nightlife hubs] and it felt right to look for another place. It made sense to move there. Had they come from another place, we would have moved elsewhere.

Your work has always been closely connected to very specific places in the city. It is as if you embody a certain kind of “decentered” theatre of the polis. Do you agree?

From my perspective, theatre is always political. Moving to Cais do Sodré was a consequence of an investigation. This was right after we finished school. A couple of friends and myself started thinking of performing The Foolish Virgin, by Rimbaud. It was my first show. Our dramaturgical research and our wish to mix audiences led us to a concept (“a theatrical striptease in continuous sessions”) that encouraged us to do it in this specific neighborhood. We started looking for places in Cais do Sodré and Intendente. We were purposefully looking for marginal neighborhoods. But Cais do Sodré was already a mixed area: on one hand, it is a place of ephemeral relationships; on the other hand, those relations are recurrent.

You also expose your body—very often, the naked body—on stage. You display this vulnerability. Why do you find theatre to be the place for such kind of exposition?

It has to do with the idea of a gift: a body that lends itself to the gaze of others. The idea of a body that grows old, that has its own limits, a body that has specific characteristics, and a body that is exposed, letting go. Personally, there is no other place where I am more complete, where I can exist in the most absolute way, than on stage.

Why is it important for you to work in the margins when you have an incredibly good reputation as an actress and director in the artistic community? It seems like you have the talent to move between worlds and mix people from those different worlds.

It makes sense to me to work in both senses. What I felt In Zona Jota was that working there would have a consequence, not just for the community but also for my artistic work. It was stimulating, both artistically and personally. It gave me the possibility of not restricting my work to a minority, a homogenous group of cultural consumers. I believe that the whole dynamic we create with our presence in that neighborhood is inscribing its territory in the city. I ask myself: how can an artistic practice inscribe marginality in the center of a city? I have always been interested in mixing people and contexts, in creating movement.

For instance, when I gave a workshop on Pirandello’s Tonight We Improvise in Cais do Sodré, we worked the whole day and at night we performed it. Suddenly the text became alive in an extraordinary way because we performed the breaks in the bars around our theatre, we did the procession in the street, the opera, etc. It allowed us to connect with the neighborhood, moving between different spaces.

That movement happens also at the level of the text. You have been working with major 20th century playwrights for years. Now you take Brecht to Zona Jota.

That is not where I started. At the beginning, I did not work with dramatic texts. I needed several years to understand that I could be totally free when staging a classical text. O bar da meia-noite (Midnight club), an adaptation of Fiama Hasse Pais Brandão’s play Quando eu vi o Epidauro (When I saw Epidaurus), was a turning point in that sense. She rewrites several excerpts of authors that, for her, were the touchstones of Western literary tradition: Euripides, Shakespeare, Wagner, Chekhov and Pirandello. The play forced me go back to those authors and look at them from a different perspective. That was when I realized l wanted to work with The Three Sisters in a different way (2003). But I didn’t have the resources to have a full cast, so I had to find other solutions (dramaturgical and scenic). The only time I worked with the whole cast was with The Orchard (2007) and I wasn’t that happy with it. Afterwards I restaged it seating actors and spectators around a table (Última Ceia, 2007).

You create a theatrical tant, ted to work the Three Sistersferent they occured.moves

I still don’t know. Brecht allowed me to rethink my practice. Before A Good Soul, I thought of adapting Seven Deadly Sins. Two sisters travel through seven cities of the U.S. to gather enough money to build a home. This plot matched with my longing for mapping my way through the city to my next home. When I left Cais do Sodré, I still didn’t know where I was going. After 20 years, I was homeless. It was brutal. I knew I couldn’t go straight from Cais do Sodré to Zona Jota. The project Seven Deadly Sins mapped out the city, signaling its theatres. I asked my peers for help and the mere fact of helping me connected them somehow. Seven companies were able to host the seven performances in the same week (one per day and per place). I felt less alone. We did a different show everyday with a different main actress [10 in total] using a different version of the text. Now, after the monologue, I want to go back to it. I asked Luis Mário Lopes to write a new piece for the same 10 actresses. I would like to do this project in seven Portuguese regions, including Madeira and Azores. The project only comes to an end after the seven performances. This will be the end of the transition. After that, I don’t know where my work is moving. 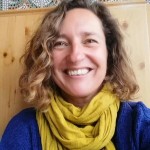 [1] Ana Pais holds a PhD in Theatre Studies entitled Commotion: Affective Rhythms in the Theatrical Event from the University of Lisbon. She has worked as a theatre critic in the most distinguished Portuguese newspapers (Público, Expresso and Sol) and has collaborated as a dramaturge and assistant director in both theatre and dance projects in Portugal. She is the author of a study on dramaturgy entitled Discourse of Complicité: Contemporary Dramaturgies (Colibri, 2004) as well as several articles in national and international journals. From 2005 to 2010, she was Assistant Professor at Escola Superior de Teatro e Cinema. Since 2003, she has been curating discursive practices talks, residencies and events in theatres and cultural institutions in Portugal. Presently, she is a research fellow at CET–Centro de Estudos de Teatro da Universidade de Lisboa.