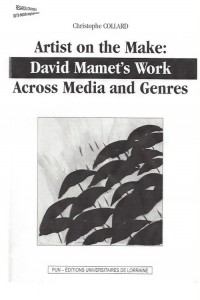 David Mamet is certainly, along with Sam Shepard, one of the best-known American playwrights of his generation, with at least five major plays now considered canonical. The first was Sexual Perversity in Chicago (1974), followed by American Buffalo (1975), Edmond (1982), Glengarry Glen Ross (1983), and Oleanna (1992), all produced in theatres internationally. A great number of academic studies have also been devoted to Mamet the dramatist and his aesthetic/linguistic strategies within the context of theatre and drama history.

The first book-length study of his work was written by Christopher Bigsby, a leading European scholar of modern American drama, in 1985, and, in 1987, Dennis Carroll did an introductory monograph. This was before Mamet turned to film as a screenwriter and director. Since then, Mamet has only occasionally returned to the theatre with his play November, in 2008, and Race, in 2011. Mamet’s prolific writing now also includes several volumes of essays and reminiscences, the novel The Old Religion (1997), children’s books, and a superb critical examination of the film industry: Bambi vs. Godzilla: On the Nature, Purpose and Practice of the Movie Business (2007).

Mamet’s work and writing now spans over forty years and clearly needs to be seen in overview as the complex venture in various fields that it is. Such a view can certainly show the underlying patterns and offer deeper insights. The Cambridge Companion to David Mamet, edited by Christopher Bigsby, in 2004, is such an example. It offered two separate chapters on Mamet’s film and fiction, by individual authors, in a volume devoted mainly to aspects of the playwright’s work. A comprehensive volume of Mamet’s work “across media and genres” could in theory offer more. In this sense, the fundamental question is whether Mamet the dramatist works in other genres as a means to fulfil a vision that takes him beyond boundaries, or whether his other work is merely somewhere between serious art and popular entertainment. Mamet’s status as a contemporary classic playwright is already secure, but what of the other Mamet? It is doubtless uncharted territory. Is he just a dramatist or is he really a jack-of-all-arts?

Christophe Collard, a scholar at the Free University of Brussels, sets out his study of Mamet with a long first chapter called “First Principles,” analysing foundations for the overall development of Mamet’s aesthetics in theatre and, more especially, character building and language shaping. The playwright was first of all an actor who encountered the basic rules of acting in a promising off-theatre environment in Chicago, in the early 1970s. Some of his work with the St. Nicholas Players became legend. Collard notes the significant shift from simply acting to the teaching of actors, which inspired Mamet’s first short pieces and then fuelled most of his major plays.

In terms of dramatic theory, Collard sees Mamet’s early works as keeping with the master trope of aporia rather than being allegorical, moralizing or even political, and highlights “the artist’s preference of process over product, i.e. his relative unconcern with the specific interpretations that his work generates, as opposed to the mechanisms it stages and the (cognitive) strategies it mediates” (115). Collard applies no evolutionary model on Mamet’s artistic development to describe these “first principles.” Some quotations from later writings are used to prove what is being said about the young artist and, in the end, this first chapter is more of a catalogue of thematic issues that run through many of Mamet’s works, e.g. the topics of “absurd heroism” and ”deception.”

The second chapter—Mamet’s work in different media—is treated by Collard as a specific questions of genre. This he sees as problematic because “the term connotes conventionality and functionality” (136). Thus, he combines the problem of genre with Mamet’s works in radio, film and television. One might not agree with this in general, but Collard discusses each of his examples in a convincing way. Mamet’s first radio play was The Water Engine, which was first a play for the stage (after the material had been discarded as a short story and screenplay) (142). Collard also shows how Mamet’s first original radio play, Prairie du Chien, of 1979, was a kind of bridge on his way to becoming a screenwriter. Indeed, his screenplay for Bob Rafelson’s remake of The Postman Always Rings Twice (1981) is certainly a matter of film genre (147).

Mamet’s “authorship in popular media” is a crucial point in Collard’s study. He states “that popular media laws taught him that bigger budgets meant more personnel and less creative autonomy,” and “on top of that, making a profit implied generic compromises” (148). Collard’s focus here is exclusively on how Mamet as an author and director in the film industry operates on what had previously been introduced as “first principles” of aesthetic strategies.

Mamet’s work for film in the early 1980s, when “New Hollywood” merged and dissolved into the Spielberg era, was characterized by the reworking of genres and their hybridization (172). In that sense, Postman and Mamet’s later films must be noted as examples of a larger trend in which Collard sees Mamet working in a “schizo-pragmatic quality” (172). Now a renowned playwright in the film industry for his role in the systematic and strategic reshaping of established genres, Mamet still remains “a pragmatist humanist with a knack for mind games” (186). At this point, Collard hybridizes what is commonly separated in film, theatre and literary studies. His genre is now the all-encompassing Mamet, with his manifold works across media.

“Mamet Merging Media,” the third chapter, is therefore devoted to various aspects of adaptation—a rich field, as Mamet adapted some of his own plays for film and television, or, within the world of theatre, made adaptations from three of Chekhov’s plays. Instead of examining the typical issues of appropriated originality and the doctrine of fidelity, Collard sees adaptations as a special form: “A palimpsest, the adaptation effectively stages multiple texts simultaneously. However, rather than to be lamented for its parasitical ‘impurity,’ the ‘double vision’ it stimulates is generative at heart” (213). Such a positive approach to adaptations allows for a deeper analysis of Mamet’s work, most comprehensively with the 1992 film adaptation of his most successful play, Glengarry Glen Ross (238-46).

Collard applies the term “transmedial authorship” (244) to this phenomenon of Mamet adapting his own work, while Wag the Dog, probably the best-known film Mamet has written and an adaptation of Larry Beinhart’s novel American Hero, is analyzed as a case of conflicting approaches to adaptation between novelist, director and a second screenwriter before Mamet took over (267). Here, we can see how the practice of an author is framed by the different interests in the movie business.

Another example, Mamet’s bold adaptation of Faust for the stage and radio, has been chosen for “the dynamic that drives Mamet’s relentless explorations of media and genres, his adaptations, as well as the ‘militantly intermedial’ works” (288). It is no surprise that Neil LaBute, a writer-director also working in both film and stage, with popular and critical success, is presented as a “spiritual successor” to Mamet (300-02).

In his concluding remarks, Collard again takes up the title of the book, which is itself an adaptation of City on the Make, the title of Nelson Algren’s book about Chicago (1951), and ends by referring back to Mamet’s “particularly Chicagoan admixture of the populist and the intellectual” (317), a mixture that effectively underlies this detailed study of expanded authorship. 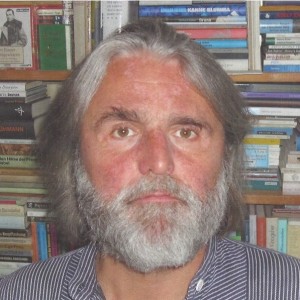 Artist on the Make: David Mamet’s Work across Media and Genres