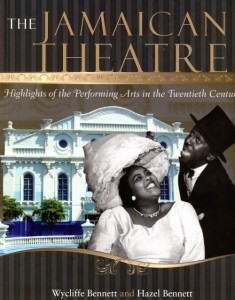 This colourful and polished publication with pages of archival photos is a cultural history of Jamaica composed of essays on its theatrical development, as well as an overview of all Jamaican performing arts dating back to the arrival of the British in 1655 and the island’s historical struggles out of slavery. It is also a collection of biographies and testimonies by local artists and cultural specialists.

Introductions by two prestigious names in Caribbean culture clearly establish the tone of this volume. Derek Walcott—poet, playwright, director, professor, winner of the Nobel prize for literature in 1992—and Rex Nettleford (1933-2010)—a dancer, choreographer, Rhodes Scholar, founder of the National Dance theatre company of Jamaica and an important figure of post-independence cultural development—set an impressive tone. Walcott, particularly, gives much praise to the authors, especially Wycliffe Bennett: “The figure behind the annual cultural festivals of Jamaica,” the one who took on “the unpaid task of spreading the gospel of a national theatre by his trips to remote areas which metropolitan superiority would dismiss” (x).

At first glance, the title might seem confusing in that theatre is equated with the all the performing arts, an assumption confirmed by the fact that the book pays less attention to published plays than to performances that have left a special mark on the country. We learn that much of indigenous Jamaican theatre is related to physical and musical performance where dance, singing and music play an even more important role than dramatic texts. That, perhaps, explains why the published works of Jamaican playwrights, such as Dennis Scott, Basil Dawkins and Trevor Rhone, are given only passing mention in the section called “Profiles and Biodata.” Others, such as Sylvia Wynter, Patrick Brown, Pat Cumper, are mentioned in chapter 7, as “Jamaica’s Younger Playwrights.” In general, references to authors treat them as only one of many collaborators in the performance event, on the same level as producers, directors, technicians, singers, actors musicians, storytellers and designers.

To highlight this, the authors divide the book into four “Acts” and eighteen chapters, each one focussing on a specific period and specific genres of performance associated with that period. They incorporate explanations of pre- and post-independence relationships between Britain and Jamaica: Act I—Setting the Stage; Act II—The Jamaican Stage; Act III—The Dance Evolves; and Act IV—Major Productions, Training and Musical Achievements.

A portion of Act II is dedicated to the development of Jamaican pantomime, a form similar to British pantomime, but one which evolved after independence into a uniquely Jamaican performance event, thanks to the work of Louise Bennett Coverly and her writings on local folklore, mythology and the Anansi-based stories, relocating them from Africa into Caribbean settings. The post-independence pantomime became a symbol of the breakdown of British influence and the growing indigenization and general development of authentic Afro-Jamaican forms of performance. Much is due to contact with the Anansi themes: Busha Bluebeard and Bre’er Anancy or the popular Little Theatre experiment entitled Solday. All these theatre productions, quite different from their British counterparts, gave the Jamaican theatre its “spine” according to Noel Vaz, Louise Bennett (Miss Lou) Coverly, and others.

Also important is Mary Morgan’s chapter 8, devoted to the development of theatre at the University College of the West Indies (which became the University of the West Indies—UWI—after independence). Chapter 9, by Honor Ford-Smith and Eugene Williams, is an important analysis of the evolution of textual and theatrical stage practices in the country. They explain how the Little Theatre Movement gave rise to the Jamaican School of Drama (JSD). In 1977, Dennis Scott was appointed director of the JSD, linking his reputation as a poet, dancer, playwright, director and critic to the school, its pedagogy and to the needs of the newly independent nation, where questions of cultural identity had become the focus of the school’s training. Thus, the Little Theatre Movement laid the groundwork for some of the most important writers, actors and performances in the country.

In 1976, the school moved into a larger complex, called the Cultural Training Centre, which housed schools of art, dance and music. This marked Jamaican cultural decolonization, creating a melting port of Caribbean cultural exchange, as Jamaicans began integrating with their neighbours in the region. The school became a catalyst for interdisciplinary research, for the development of orality, the written tradition and the teaching of speech, as opposed to the perfecting of a British accent. Even Dub poets emerged from that school thanks to its interest in popular culture.

The school also developed new Caribbean scripts and creolized North American and British scripts. Between 1977 and 1989, it gave rise to post-colonial theatrical strategies and the critiquing of post-colonial versions of history and memory, such as we find in An Echo in the Bone by Dennis Scott. They also critiqued colonial discourses through mimicry and satire, while retaining elements of tragedy (122), the production of a rapid role-changing style of performance with emphasis on music and on ritual form. The lack of scenographic elements gave rise to productions with few props, bare stages and highly symbolic approaches to representation. Ford-Smith, in her recent Three Jamaican Plays, A Postcolonial Anthology (1977-87),[1] explains that 1977-87 was a “critical decade in Caribbean Society . . . characterized by a search for new theatrical themes, methods, genres and modes of audience address. . . . Memories of colonization linger alongside the urgent challenges of decolonization, the two existing simultaneously, struggled together in complicated and inseparable ways”(1).

One of the interesting groups that emerged from this post-colonial climate was the Sistren Theatre Collective of which Ford-Smith was herself a co-founder (she later moved to Canada where she continues to teach performance strategies at Toronto’s York University). Inspired by collaborative social practices of the Brazilian Augusto Boal, hers was a form of verbatim theatre aimed at developing community voices and helping individuals, especially women, solve their own problems. This company, along with others such as Groundwork and Oomph promoted adult education, collective and individual therapy and outreach work creating links with theatre companies in Africa, Canada, and Latin America, especially with women (in the case of Sistren Theatre) and an attitude of “postcolonial self affirmation” (125).

Act III discusses the evolution of ballet, modern dance and the creation of the National Dance Theatre Company by Rex Nettleford, while Act IV shows and illustrates the evolution of musical training and composition, speech training, popular music, especially in the context of such landmark productions as the Festival Movement. For this, the authors, make excellent use of journalistic and printed archival material, showing the practice of theatre criticism emerging from this growth with reviews appearing in the Jamaican daily The Gleaner, as well as The Sunday Gleaner and The Sunday Herald.

Festivals were clearly an important development of Jamaican Performance. In the year 1955, the first island-wide National Festival of the Arts, Jamaica 300 took place, covering drama, instrumental and vocal music, African ritual dance (such as Jonkonnu), as well as European dance (such as Ballet, quadrille and schottische). That was also the year when a girls’ and boys’ college came together to present The Tempest, while visiting playwright Noel Coward proposed the creation of a bandwagon (similar to the Pageant carts of the English Morality plays) as the Adult Drama Festival established a season of plays. Out of these organizations came an interracial theatre called The Repertory Players (1957), and from 1955 to 1974 there were over a thousand performances of one-act plays prompting many Jamaicans to speak of this as the ”vintage years” of Jamaican Theatre (201).

In 1972, Carifesta, the National Caribbean Festival of the Arts, began emphasizing relations between Jamaican culture and that of other islands in the region where all the national heroes of the region were honoured: Toussaint Louverture (Haiti), Simon Bolivar (Venezuela), José Marti (Cuba), Benito Juarez (Mexico) and Marcus Garvey (Jamaica). Yvonne Brewster’s article on the 1976 Carifesta Grand Gala comments on the participation of Trinidadians and their production of Derek Walcott’s O Babylon, a play about Jamaican Rastafarians. She explains that: “The play itself was wonderful but the (Jamaican) audience regarded Rastas with Trinidadian accents as travesties and there was no way round . . . to what they regarded as ridiculous. . . . Here in Jamaica in 1976 there was a lot of nationalistic angst and not too many people showed up. Derek Walcott was furious and let it be known” (218).

The final chapter emphasizes the great figures of popular culture such as Bob Marley, Rita Marley, Jimmy Cliff, as well as popular classical musicians and orchestras that developed exchanges with other parts of the world.

An appendix entitled Profiles and Biodata (where the authors explain that the personalities mentioned in this segment may not have received full treatment in the main text) is of great importance. This also explains, no doubt, why Michael Reckord, one of the most prestigious theatre critics in the country, is included only as a playwright, actor and scriptwriter for his pantomimes, whereas his work as critic is not discussed.

In the end, this is an important volume whose approach should become a model of cultural history for the entire Caribbean region. 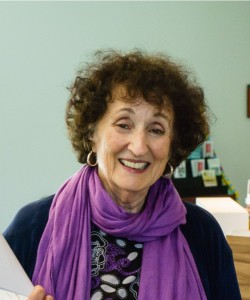 *Alvina Ruprecht is a member of the Board of Directors of the Canadian Theatre Critics Association and head of the Ottawa-based Capital Critics Circle. A reviewer for CBC Radio for some 30 years and a Professor Emeritus from Carleton Universitiy, among her specialties are Caribbean theatre.

The Jamaican Theatre: Highlights of the Performing Arts in the Twentieth Century