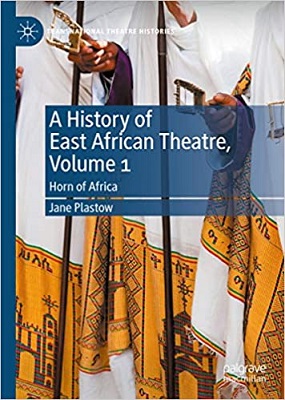 This series from Palgrave Macmillan is an attempt to document and theorize the emergence of theatre, opera, dance and performance against a range of backgrounds including imperial expansion, technological development and even modernity. That’s a whole lot to deal with, but if this new volume on the Horn of Africa is the standard, this series will be outstanding indeed.

Impeccably researched and impressively documented by British scholar Jane Plastow of the University of Leeds—a visitor to the region for decades and an indefatigable volunteer worker within many of its theatres—the volume provides genuinely insightful histories of these rarely-written about (especially in English or French) theatre communities. Offering authoritative histories to about 2016, it fills a huge gap in our knowledge about this part of the world and, as such, should be an absolute must-purchase for theatre libraries.

The word “transnational” is, of course, key here as the volume moves across many African borders to follow linguistic and performance lines in nine different nations—most directly in Ethiopia, Eritrea and Somalia/Somaliland but also in Burundi, Djibouti, Kenya, Rwanda, Tanzania and even Uganda. Plastow tells us in her introduction that a second East Africa volume will deal more deeply with Burundi, Kenya, Rwanda, Tanzania and Uganda and will also include French-language theatre from Djibouti. This is material rarely found, and it will hopefully bring new research interest to both the region’s and Africa’s complicated theatre life.

Plastow notes right in the beginning that as a Briton herself, she is “acutely aware that . . . the history of whether a nation had been colonised, and by who, strongly affects theatre down to the present day, and where several countries shared a coloniser, they also share important elements of theatrical history” (2). Having lived, made theatre and researched in five of the nations concerned, however, she is certainly well-positioned to live up to the challenge both intellectually and culturally.

Of interest right off is Plastow’s takedown of the notion that English and French are spoken widely across African borders, something she calls “a complete fallacy” betraying “a class-based understanding that excludes the majority . . . who do not fluently speak a European tongue. . . . What are apparently ‘national’ theatres are very often not that at all. They are at various times trans-national, ethnic, urban or class-based” (4).

She argues convincingly that traditional African performance modes—usually involving music, dance and storytelling—are significantly different than European ideas of theatre as “a secular, embodied storytelling form where actors are seen as representing particular fictionalised characters.” Which is to say that European style spoken theatre needs to be seen as a new cultural form wherever it was introduced on the continent. With this as base, she sets out to show how these societies took the new style and made it their own through not only hybrid forms but also through “indigenous semiotic codes and indigenous thought” (6).

She argues as well that what she calls “the myth of African homogeneity,” put forward by many early Africanists, had more to do with the lack of available materials to study than it had to do with any cultural reality. She also points out that very few African theatre scholars or theatre artists have had serious opportunities to travel widely within their own continent and only a tiny percentage of African plays have been published. Hence, “the myth of a unitary black culture and . . . a fail[ure] to acknowledge issues such as inter-African racisms and cultural supremacist beliefs” (8).

Within this Horn of Africa study, Plastow says the strongest professional theatre is to be found in Ethiopia, based mostly in Addis Ababa and performed almost exclusively in Amharic. She also finds a widely based popular Somali theatre written in Somali and played across Somali-speaking communities in several countries. For her, it is a theatre “almost no one outside Somali-speaking territories has any knowledge of” (11).

The lengthy chapter on Somali Theatre that follows—a theatre found in Somalia, Somaliland, Djibouti, Ethiopia, Kenya, Yemen and in Somali-speaking diasporas around the world—is one of the most eye-opening mainly because so little has been written on it. Between the 1950s and 1990, she writes,

Somali theatre was both a popular and a socio-political cultural force. Plays toured the whole transnational Somali-speaking region, audiences queued for hours to obtain tickets, performances were taped, recorded and relayed across Somali-speaking territories and government agents attended shows to ensure that scripts . . . were not modified in production. (51)

These shows attracted both rural and urban audiences, educated and uneducated, old and young, men and women, politicians and a popular audience.

This theatre, she says, developed from “a fusion of indigenous poetry and song forms . . . utilising both local percussion and imported Middle Eastern and western instruments, ideas of theatrical form adapted from Italian and British professional and school performances of drama and from Italian and Indian film imports” (52). Plastow terms this style “an extraordinary, unique African performance form . . . probably the most significant African theatre that I am aware of to have been so little researched” (121).

Another lengthy chapter on Ethiopian theatre is equally incisive providing a wide swath of history from the first modern play written in 1921 by Tekle Hawariat through a period of strong support given to theatre (and to playwriting particularly) by Emperor Haile Selassie. Ironically, despite the fact that “playwrights [were] esteemed by the Emperor and public alike . . . actors, and especially actresses, were seen initially at least as being somewhat on a par with sex workers” (189). She explains that the Emperor’s interest in theatre was a personal one, specifically in playwriting, particularly and especially in plays written in the Amharic language.

As soon as he ascended the throne, she tells us, Haile Selassie started commissioning plays and

through his patronage, sought to turn theatre [into] a voice supporting the crown, the church and the status quo . . . a clever piece of political maneuvering. . . . [He] commissioned original performances for . . . high profile events – to celebrate royal anniversaries, birthdays and weddings. . . . The repeated choice of a command performance has to indicate the Emperor’s love, not only of excessive flattery but also of a good stage play. (192)

In the early and mid-1960s, he was not only allowing “critical plays on stage; he was attending performances and congratulating actors even if on occasion he shunned the playwrights. . . . These interventions, over some forty years, were sufficient to create a culturally vibrant and at times politically important, capital-based theatre culture that continues to flourish . . .” (193).

As for theatre in Eritrea, it grew out of a largely shared Ethiopian-Eritrean sensibility,

common to highland, Orthodox Christian inhabitants of the region. Indeed, their theatre has spoken to and for this particular group of people and has excluded majorities in both nations. . . . [Certainly] many Eritreans prior to independence spent time in Ethiopia and a number of leading cultural figures were substantially educated there. The most significant early Eritrean theatre company Ma.Te.De. put considerable effort into translating and producing . . . Ethiopian plays. (283)

She notes that by the end of the time period of her study (2016), there was a huge divergence in activity levels. While Addis Ababa-based Ethiopian theatre powered ahead, theatre in Eritrea was being “stifled almost to death” (284).

For Plastow, Ethiopian theatre is the probably “the most prolific and popular capital-based movement in Africa . . . [with] beloved powerful voices, with the Amharic writers in particular recognised as masters of beautiful, complex language. These have been, and in Ethiopia at least, still are, theatres that profoundly matter” (285).

Another theme of particular interest running through the volume is the position of women in East African theatre. We learn here that

in the early days of theatre in a number of the nations studied, women could simply not be found to go on stage because of the levels of social opprobrium. . . . This occurred particularly in all the nations of the Horn of Africa where we know that men took on female roles in many of the early plays while a desperate search took place for women willing to act. (38)

Noted sadly by Plastow is the fact that, after 20 years, the only journal/book series dealing regularly with theatre studies on the continent, African Theatre, had to cease publication in 2020 for lack of sales. She explains that “the natural buyers . . . would be universities and students, but African universities often have tiny book-buying budgets and students even smaller disposable incomes so publishers understandably fail to publish.”

All too true and all the more reason to welcome this important volume. It is outastanding original research in a field too-long under-researched. One waits enthusiastically for Plastow’s Volume Two.

*Don Rubin is a Professor Emeritus in Theatre Studies at Toronto’s York University. He taught courses in African Theatre and Drama for many years and was the Series editor of Routledge’s six-volume World Encyclopedia of Contemporary Theatre including its volume on African theatre. He has lectured widely on African theatre topics in Canada, the United States, Cameroon, Senegal, Nigeria and was a Visiting Professor at Stellenbosch University in South Africa. He is Managing Editor of Critical Stages as well as its Book Review Editor.