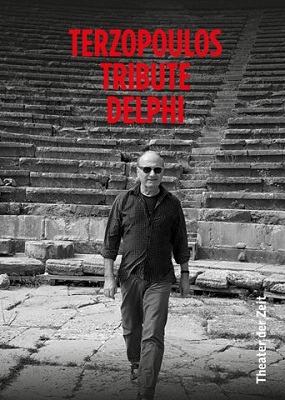 Terzopoulos Tribute Delphi is the offspring of a multi-modal and multi-vocal international conference, held in Greece in November of 2018 by the European Cultural Center of Delphi with the support of the Onassis Foundation, on the work and theatre method of the Greek director Theodoros Terzopoulos.

The volume is a material trace from the Delphi gathering, echoing back at its impressive interdisciplinary program of academic talks, workshops, stagings, screenings, audio-visual installations and parallel events. As such, this collection fleshes a “translational” act; an übersetzen passage, a “transfer” in Eleni Varopoulou’s terms (as cited in the Tribute) “of one thing to the opposite bank” (150). If this “one thing” is the Delphi event, the “opposite bank” here is made of sentences, photos and print, seeking to transfer, transpose and thus record the synenergy of the 2018 conference. A most challenging task indeed.

Freddy Decreus tellingly describes Terzopoulos in the Tribute as a director, a thinker, and a “Master(ly) Teacher” (131)—a three-fold force and a threshold dweller. Working in liminal space, with and across contradictions and boundaries, Terzopoulos’s Kerberos-like theatre makes no easy referent. As CS editor Savas Patsalidis concludes in his contribution, this theatre is “not easy to define.” It is one that escapes precise naming and precise words, and invites, instead, a “wide range of intersections” and “verbal struggle[s]” (125).

All these challenges notwithstanding, Terzopoulos Tribute Delphi certainly pays full tribute both to the actual Delphi event that gave it birth, and to the polyvalent theatre of Terzopoulos that forms its referent. Its greatest strength is perhaps its anthological logic. The Tribute is a work of légein, not in the sense of “saying,” “narrating” or “wording,” but in that of picking up, collecting or gathering (as from the Latin legere) and, as such, it echoes and retains the polyphonic symbiosis that originally set it off.

The “gathering” attempted here is one of impressive plurality. It includes more than forty contributions including pieces from Erika Fischer-Lichte, Anatoly Vasiliev, Eugenio Barba, Eleni Varopoulou, Dimitris Tsatsoulis, Penelope Chatzidimitriou, Savvas Stroumpos, Kim Jae Kyoung, Sophia Hill and Paolo Musio among them. The rich, multi-vocal essays stretch across the wide spectrum of Terzopoulos’ theatre work, leaving no head of its creator unfed. We witness Terzopoulos the working artist as much as we hear the maestro-teacher and his training methods. As we range through this material, we plunge into Terzopoulos the thinker and his understanding of theatre per se.

Plural, polyvalent and kaleidoscopic, the collection also offers significantly diverse discourse and perspective featuring thinkers and practitioners from a variety of different cultural backgrounds, various disciplines and schools of thought. Among them are cultural institute representatives, academics, theoreticians, directors, actors, musicians and visual artists, but also psychoanalysts and neurologists.

Their contributions are valuable not only in the unique/individual perspectives they bring to the tribute, but also in the way these hold together under the same roof as separate yet appropriate pieces in an exceedingly rich mosaic. Readers tune in to individual voices (as in the voices of Blanka Zizka or Aglaia Pappa with their unlearning testimonies, of Savvas Stroumpos and his meticulous account of the Method, of Daniel Wetzel and his simple confession of shared curiosity, of Dimitris Tsatsoulis and his fascinating account of a shared glossolalia, of Gonia Jarema and her insightful look at language paralysis—to name a few examples), while at the same time tuning back in re-woven “refrains” (as in the “unsayable,” the “ultra-cultural” and the “Dionysian”) that repeatedly surface.

In this back-and-forth between the singular voice and the plural refrain, a chorus is born. The oral/aural “feel” of all the contributions—wisely not “edited” or altered to fit a normal print work—adds to the choric feel. An actor’s testimony is followed by a collaborator’s memory or a theorist’s analysis. The intimate tone of first-person narration fleshes a memory that mixes with the details of a trainee’s description, only to be followed by a theoretical analysis of Terzopoulos’ works. Such a Cubist-pluri-vocal script undoes the linear here, inviting readers to find their own way across fragments, memory traces and speculations. Terzopoulos’ theatre is done and undone, woven and then rewoven in a Deleuzian (perhaps Dionysian) gesture of deterritorialization. “Crash the Mirror, you say,/ And the fragments will/ give birth to a new image” (Terzopoulos 18).

A wonderful meta-tribute then to a man whose work is rooted in the multiple and the fragmented, a man whose work moves beyond cultural limitations and across disparate disciplines. If Terzopoulos’ theatre has often been described here in slashes, hyphens, conjunctions and mutual contradictions, the choric gesture attempted by the editors is a perfect symmetry, form fitting content.  A most valuable addition to the existing body of work on Theodoros Terzopoulos’ theatre, one that blurs, smashes and re-constructs this Greek director’s mirror.

*Maria Ristani teaches British and Anglophone drama and performance theory in the School of English at Aristotle University in Thessaloniki. Her research work and teaching in 20th and 21st century theatre focus on the ways Anglophone theatre interacts with sound art and acoustics in audio-based theatre, podcast drama and sound performances.