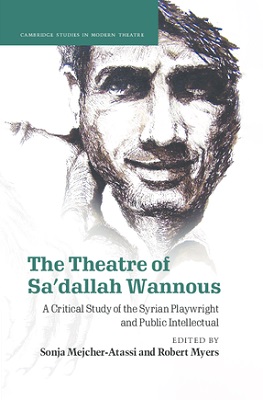 I recall waking up on a mid-May morning in Damascus and, as I went about my errands, noting the mysterious appearance of posters around Damascus with the simple date: May 15, 1997. Syrian playwright Sa’dallah Wannous had died in the early hours of that day, and his nephew had created and distributed these posters around the city center. It was a sad day for Damascus, for Syria and Syrian theater and for world drama.

However, too few people in the capital knew the import of Sa’adallah Wannous then, let alone the tragedy of his untimely death. This is because most serious critical, engaged Syrian drama is little known in its homeland, given censorship of political speech there and the squelching of dissent in what passes for the public sphere.

For this reason alone, the publication of this important volume from Cambridge is welcome, not only because it represents the first critical study of Wannous—his life and works, their staging and reception—but because it reasserts Wannous into conversations about Syrian cultural politics in a decisive moment when the histories and struggles he expressed and provoked in his works are all the more relevant for a society seeking pathways to liberation in the aftermath of a violent revolutionary moment.

The collection brings together distinguished scholars, authors, critics and artists to document, assess and celebrate the legacy of an important Syrian, Arab and Middle Eastern figure in world drama. However, while, on the one hand, the publication of this work is indeed cause for celebration, on the other, it does come some twenty-five years after the playwright’s death, which makes one wonder: what took so long? What accounts for the paucity of studies like those collected in this volume that engage with the work of a figure once nominated for a Nobel Prize and widely understood to be central not only to Syrian but to Arab and even world literary and intellectual life in the last half of the twentieth century?

It is telling that this first real critical assessment of Wannous’s work comes so late; hopefully, it is a sign that this particular playwright—and Syrian drama generally—can finally begin to carve a space in the halls of world literature. This is, of course, the culmination of the tireless work of the editors and advocates such as Marvin Carlson and Edward Ziter, and others such as Roger Allen. But it is also testament to the lingering difficulties of incorporating Arab writers into the fold of world literature. With the exception of Adonis, Nizar Qabbani and Muhammad al-Maghout (and perhaps a few others, including Samar Yazbek), too few have crossed that barrier writing in Arabic, still a “controversial language”[1] for some.

The text comprises four sections, preceded by an introduction and chronology of Wannous’s life and works and followed by a list of his plays and summaries of the texts. Part I: Situating Wannous offers a historical perspective on Wannous’s writings and situates them in the context of nineteenth- and twentieth-century Syrian and Arab drama, as well as Wannous’s interactions with and influence by such European figures as Brecht.

Part II: Reading Wannous examines several of his plays in detail, including his landmark Entertainment for the Fifth of June, The Rape, Historical Miniatures and Rituals of Signs and Transformations. Part III: Staging Wannous explores recent productions of his work (mainly in Beirut, Cairo, Paris and Chicago) and the importance of Wannous for younger generations of Syrian playwrights (mainly working outside Syria). The act of publishing critical translations of Wannous’s oeuvre into English and French has greatly aided this process and was also long overdue for such a major figure.

Part IV: Remembering Wannous explores the personal life of Sa’adallah Wannous. Of note is the overview and analysis of Wannous’s personal library, bequeathed to the American University of Beirut in the aftermath of the Syrian Revolution of 2011, which serves as an archive of the breadth of Wannous’s reading and the approaches of his literary and intellectual trajectories. The intimate testimonials from Wannous’s close friends—Mardam-Bey and Khoury—and the personal portrait by Wannous’s daughter (herself an emergent literary figure) rounds out the collection and offers readers a more comprehensive vision of this complex character who famously claimed that, despite all the struggles both personal and political, the Arabs were “sentenced to hope” (mahkumūn bil-amal) and “that what happens today is not the end of history” (mā yahdath al-yaum lā yumkin an yakūn nihāyat al-tarīkh). It is a fitting motto for Syrians today who continue to grapple with dictatorship, censorship, economic malaise, exile and violence in the aftermath of the Syrian Revolution and the uneven legacy of the Arab Uprisings.

Clearly, the volume is a very welcome addition to the library of scholars of the Arab world, academics and dramatists interested in the life and work of a leading figure of Arab and world drama, and for anyone interested in the cultural politics of Syria in the last decades of the twentieth century (especially after the Ba‘th take over in 1963).

That said, the work also raises some uncomfortable questions. Why is it that non-European writers only seem to find legitimacy—even legibility—in the West and even in their own homelands through their “influence” by or collaboration with European authors? Much is made of how Wannous was influenced by European figures, mainly Brecht, as if that alone is sufficient reason to consider his works seriously. His incorporation of storytelling techniques from the Arab literary traditions of hakawātī and frame tales (as well as possibly Sufi and other influences) are, it would seem, mere accoutrements on what is argued as a version of (Eastern) European political drama, with a pastiche of local color added to core European literary themes, and then reified as universal. Only Carlson’s essay attempts to place Wannous within the long tradition of performance in the Arab world, but even here this is generally traced to nineteenth-century imitations of European forms (in the works of Marun al-Naqqash). Only Abu Khalil al-Qabbani is left to stand as an important precursor.

On the one hand, the centering of the European influence is not surprising, for, as with Syrian cinema, literature, and even some musical forms, the connections to Europe, and especially the former Soviet Union, were foundational for Syrian artistic production in the last six decades. On the other hand, the move to legitimate authors and intellectuals from the Global South only through their relationship to the Euro-American metropole perpetuates colonial power dynamics.

This is not to deny the influences on Wannous’s life and works, which began before his sojourns to Europe, but to point out both how the celebration of his work is mediated by the European and how other dramatists with perhaps less exposure (and, to be frank, fewer connections to the political elite due to affiliation) remain illegible on local and world stages. For this reason, the text often reads as hagiography as much as it does critical overview.

The same case can be made about Adonis, yet another Syrian literary figure who is perennially mentioned as a possible Nobel nominee, and whose works are influenced by many of the same literary, intellectual and cultural sources as Wannous’s: a mixture of European forms, political engagement and occasional obscurantist Sufi references and ancient mythologies. Even Wannous’s Rituals of Signs and Transformations directly invokes Adonis’s work, especially The Immutable and the Transformative (al-Thābit wa-l Mutahawwil, 3 Vols., 1974-78). But there is little mention of these possible connections in the text (other than to note that Wannous published in the literary journal Mawāqif, edited by Adonis.)

Broader contextualization of Wannous and his works with the rather extensive artistic legacy of Syria and the Mashriq region of the last several decades might have promoted a more nuanced view of the artist and thinker; the risk is that he comes across as sui generis, or, worse, as derivative.

Yet, for all that, this volume is both timely and valuable and should spur continued critical engagement with this important figure, and, one hopes, lead to further excavations of the important yet little studied archive of performance practices in the Mashriq.

*Jonathan H. Shannon is Professor of Anthropology at Hunter College and the Graduate Center, The City University of New York. His research and writing focus on culture in the Mediterranean and Arab world, with a special focus on Syria, Morocco, Spain and Turkey, and among Syrian migrants across Europe. He is the author of numerous articles, two scholarly monographs (Jasmine Trees: Music and Modernity in Contemporary Syria, 2006; Performing al-Andalus: Music and Nostalgia across the Mediterranean, 2015) and a novella (A Wintry Day in Damascus: Syrian Stories, 2012).