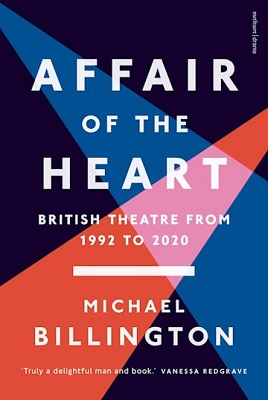 With a tenure at The Guardian newspaper as a “full-time aisle squatter” beginning in 1971, Michael Billington was, by 1995, the dean of British theatre critics, writing for the most important newspaper of the country’s progressive intelligentsia. Hardly a pushover, he nevertheless enjoyed profound respect from the people whose work he reviewed, and had reviewed, for a quarter-century.

Billington certainly told his readers where to spend their ticket money, but within the halls of the Royal Court Theatre, the National or the Royal Shakespeare Company, he was also seen as a Boswell, an erudite, bookish, empathetic man with a sharp intellect who supported serious playwrights when and where they were most in need.

And then along came Sarah Kane.

Billington’s review of Blasted at the Royal Court Theatre Upstairs in January 1995 is reprinted in this new volume—Affair of the Heart: British Theatre from 1992–2020—along with some 200 other of his reviews; a record of the last 28 years of Billington’s extraordinarily lengthy career at the paper (48 years!). Just as importantly, it is also a critical record of the rise and fall (and rise again) of the British theatre during the same period. In fact, given how new plays reflect their surroundings, it’s also a history of Britain, or, at least, of that nation’s most durable impressive global export; namely, its actors, directors and writers.

Like most of his colleagues, Billington scorched Blasted, calling it “naive tosh,” inducing merely “bombed out indifference.” He ended by saying that “the good fairies have suddenly seem to have deserted this cradle of the new drama.”

History was not kind to his review nor to other scathing pieces about it in the tabloids. But he was the one Kane’s people cared about the most. So, it is to Billington’s credit that he not only reprints a notorious review he could have buried in what is, after all, a self-curated collection of his favorite notices, but he also includes some of the letters of outrage that promptly arrived from some of the bigger names in British playwriting, including David Greig and Caryl Churchill. And then he appends a qualified mea culpa. “I was hopelessly wrong about Blasted on a first viewing,” he writes. “All I can say is I was not alone.”

Indeed not. All critics make mistakes and most of us, writing the proverbial rushed piece, have spectacularly missed the boat on at least something, if not many somethings. The critical response to Blasted, which had real ramifications, is a crucial part of the history of the British theatre of the 1990s. It needed to be there, even if it is simply an outlier in the wise and kind Billington oeuvre.

Relatively untouched by the decline in arts journalism on both sides of the Atlantic, Billington still laments it, rightly noting this devolution in his introduction about the end of serious arts coverage in newspapers and, of course, the replacement of staff writers with internal editorial clout with freelance reviewers simply moving from gig to gig. It feels unlikely that another Billington will come along, a truth I suspect he would lament, not because no young writer could match his skills and even, in time, his experience, but because it is doubtful the newspaper industry would any longer so generously support such a theatre critic, even in London where some staffers have continued to abide.

Billington, like Richard Christiansen in Chicago, was over the years what we’ve come to think of as a journalistic critic of the old school, naturally inclined toward a degree of authorial self-effacement, even if this book does make the case for a critic being seen as an artist, too: “A creation within a creation,” as Billington admiringly quotes Oscar Wilde describing an ideal review. Of which many are reprinted in the volume.

Of course, “old school” depends on whether you believe “old school” ever really existed: Billington didn’t copy one of his stated heroes from a previous generation, Kenneth Tynan, either when it came to schmoozing with the glitterati he reviewed, or moving to the other side of the theatre’s great divide when the urge emerged. Billington kept mostly to the job, sometimes the grind, of the daily review, written within hours, if not minutes, of the fall of the curtain inevitably constrained by both space and time.

From time to time, he deviated and these pleasures are also to be found here: a revaluation of Noel Coward on the centenary of his birth, finding complexity and contradiction in the intentionally elusive dramatist; a satirical piece reacting to the absurd 2003 declaration by the Royal Shakespeare Company that it wanted to cut back the scale of its productions (“Juliet could have a window box instead of a balcony”); and a similarly comic provision of ten rules for theatregoers, after Kevin Spacey decided to go after the behavior of audiences at the Old Vic.

“Song, canoodle or have oral sex with your partner in a stage box,” Billington writes, apparently reacting to something that really happened at Jolson the Musical, making it hard for anyone in the theatre to concentrate on the actual performance.

And in a book that mostly consists of London reviews of shows aimed at the intellectual elite, there is a magnificent tribute to the late, great Ken Dodd, a long-serving comic once known as the taxi drivers’ friend because his shows went on so long, his audiences always missed the last bus home. Billington got him, loved him and was smart enough to include him with all the posh stuff about Harold Pinter and Edward Albee, to name two other geniuses he also clearly understood.

Indeed, in his republished 2008 tribute to Pinter, the author of Old Times, The Homecoming and so much else, Billington calls upon an old interview with the illusive man to note that “the famous Pinter pause owed a lot to the comedian Jack Benny whom he had seen at the Palladium in the 1950s.” A most delicious origin story.

One other Billington essay from 2005 is especially fun: “Is the 90 minute play suffocating dramatists?” a critic’s lament at the trend of brief “playellas,” a trend Billington dubbed “the new compressionism,” allowing for little in the way of embellishment, amplification and digression. That one also got a lot of sharp blowback and, frankly, history hasn’t exactly landed on Billington’s side. These days, we critics are so harried that most of us look upon that very running time as means to survive another day. There were obviously limits to Billington’s power, as with us all.

But hail Billington and his singular contribution, one marked by unimpeachable ethics, just the right amount of distance and intimacy and, of course, profound affection for theatre, with all its foibles, trends and fascinating personalities.

“I realize I am offering a hostage to fortune,” Billington writes. For sure, but it goes two ways.

An Affair of the Heart is a book—and a book title—well earned.

*Chris Jones is the editorial page editor of the Chicago Tribune and its long-time theater critic. He is also Broadway critic for the New York Daily News and director of the National Critics Institute at the Eugene O’Neill Center in Connecticut.