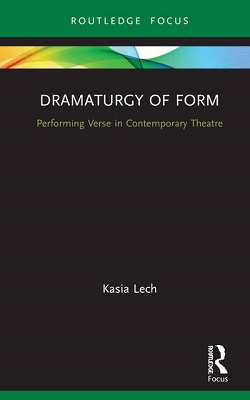 Kasia Lech is a Polish scholar based in Canterbury. She is Executive Director of the online publication The Theatre Times and has worked as an actor, storyteller and puppeteer. In this slim but exceedingly dense monograph Dramaturgy of Form, she looks at the role of verse in the theatre generally and specifically in contemporary theatre.

Acknowledging that verse has been essential to theatre from the Greeks through hip hop, she examines the resurgence of interest in verse as a theatrical language and shows how it can expand current (and future) theatre practice. Because it contains diversified speech within its own specific language, verse, she argues, reflects the globalized world’s multi-faceted and pluralistic nature.

In Lech’s many theatre examples, verse becomes a reinforcing agent heightening multivocal value and facilitating a broad internal dialogue. And because it is porous, it can activate participation, “engaging the audience in co-creating a performance.”

Drawing from her own experiences of theatre in Poland, Ireland and the U.K., along with other examples using the work of Spanish, Nigerian, Canadian, Australian and Russian artists, she explores how verse dramaturgy can extend theatrical work, how it can empower actors and enrich actor training. She also discusses how it can facilitate translation and adaptation in the theatre. She notes that verse dramaturgies also figure prominently in post-dramatic theatre preoccupied as it is with identity, marginalization, precarity and political unrest and how it can generate multi-voiced forms and even fuel playwriting.

Many of the examples she uses and artists she discusses feed off hip hop (including rap), a form connected to “a global, multi-ethnic grassroots youth culture committed to social justice and self-expression.” Hip hop is verse, and its popularity is connected to the tension it builds between rhythmic structure and the words it shapes. Verse dramaturgy can also mirror the authenticity of a linguistic multiverse and challenge the authority of a single authorial vision, thereby reflecting real conditions in society.

Lech starts with the kind of analysis we all know from poetry studies in school with metrical terms such as iamb, trochee and dactyl, learning that “enjambement” can bring new meaning to words, learning how structure and rhythm make meaning. It is verse structure, she says, that can perform the core functions of theatre speech. That is, poetry on the stage can create meanings not always apparent on the page. This is both an obvious and a dazzling concept already enlivening much current theatre and one with many possibilities for future theatre.

The major problem with Lech’s presentation, however, is that its often brilliant observations sink too deeply and too quickly into the quicksand of academic jargon, into over-conscientious acknowledgment of sources and into over-meticulous technical analysis, materials that, on their own, could easily be handled as footnotes or in a separate reference section at the end of the volume. Such notes might well be crucial for voice or acting coaches or for directors inspired to use elements of it in their work. However, within this text it impedes coherent argument and dims any hope of theatre people themselves actually reading it.

Undeniably, though, there is ongoing relevance here. Lech begins with the important recognition that verse has long been used to extend dramaturgical potential whether in the work of Stanislavski or Kristin Linklater, Yeats or Seamus Heaney. The Greeks understood the onomatopoeic effects of verse structure in their use of the anapest to denote marching, in the dance-step meters in which choral speech was written.

Lech’s many examples from Polish drama illustrate how verse rhythms uniquely transmit information in such classics as Wyspianski’s The Wedding, where folk meter mimics Polish musicality and folklore. Dance, too, becomes an extension of the verse allowing actors to move and speak robotically “as if enslaved by Polish tradition.” Her extensive and illuminating analysis of Mickiewicz’s Forefather’s Eve describes how verse dramaturgy can restore the richness of language lost, as the play emphasizes, after the standardization of Polish.

Verse dramaturgy, she argues, can also challenge anxieties of understanding in experiencing multilingual theatre, anxieties that arise from our monolinguistic need to know every word. Peter Brook’s Orghast, based on a text by Ted Hughes and performed in 1971 at the Shiraz-Persepolis Festival of Arts, used verse as part of an invented language. The musical effect of those innovative sounds countered, she argues, the spectator’s need to understand each and every word.

Lech also describes a puppet play done in Wroclaw in 2016 called Yemaya, Queen of the Seas, a piece written in response to the death of a three-year-old Syrian boy who drowned in the Mediterranean in 2015 trying to escape disaster. Yemaya used verse delivered as rap only once, preparing the audience to listen to sound and rhythm rather than any literal sense of the words and to realize that language is not a unique human ability. Indeed, Yemaya herself often communicated with dolphin-like vocalizations.

Lech believes that dramatic classics can rediscover their contemporary potential through verse that thickens and deepens text. Using Seamus Heaney’s adaptation of Antigone (The Burial at Thebes),produced at the Abbey Theatre in 2004, she notes that the tension there was not between a Greek text and an English one but rather between an English text and an Irish one, with Heaney reading the Antigone myth in the light of Irish suffering. Heaney refers to the “Iambic drums/ Of English” beating in the Irish woods. His inventiveness with conventions of lament opens up a healing space of inclusive communal lamentation that “rhymes between hope and history.” For Heaney, poetry and poetic drama can go further than protest, can go beyond character to a Yeatsian summoning of “rhythm, balance, pattern,” to images of “vast patterns, the vagueness of past times, all the chimeras that haunt the edge of trance.”

Once Ibsen’s “language of the gods,” verse can also become a “theatrical language of the marginalized.” In Niall Ransome’s FCUK’D (performed at London’s Bunker Theatre, 2017), rhythmic language evoked urban space, “writ[ing] the architecture of Hull into the ‘bones’ and fates of the characters,” to recreate Baudelaire’s poetics of the ugly. Cursing and terrified, the two main characters jump from their window on a flight path of poetry:

My eyes are gunna burst,
Air rushes up my shirt,
And when my feet touch ground,
Gravity hits.
IT HURTS

Verse, Lech suggests, contextualizes the story within U.K. politics, the pressure that years of Conservative governments put on social services, essentially giving form to the anguish of individual victims.

Of course, no volume on verse in the theatre can avoid Lin-Manuel Miranda’s Hamilton, arguably “the most publicized theatre protest against right wing politics in recent times.” Miranda’s cross-racial casting reconstructed the past almost totally through rap, collapsed time in lines that juxtaposed received history with current global situations.

Also discussed is another fairly recent hit, Emilia (premiered in 2018 at London’s Globe). Based on the life of Emilia Bassano, a seventeenth-century English poet thought by some to be Shakespeare’s dark lady of the sonnets, the role of Emilia, played as a fierce early feminist by three different actresses “use[d] verse to reinforce its key theme of female solidarity, pushing the protest beyond the time frame of the performance into the social world.” The play ends as Emilia reclaims her creative space and exhorts the audience to “listen to us.” Enthusiastic spectators, joined in and then continued the cry in a “verse” rally on Twitter, illustrating how verse can help drive theatre’s political punch into public action.

Lech’s final chapter looks at the role of verse dramaturgy in post-dramatic theatre with such productions as Carthage/Cartegena by Caridad Svich, written in English, Spanish, verse and prose. These are languages and forms “being ‘wrenched’ from one another” to illustrate the displacement and wrenching of forced migration. She writes of Bozena Keff’s A Piece About Motherland Fatherland spotlighting not a Holocaust survivor but a survivor’s adult daughter, who creates a book of poems expressing the deepest communication between mother and daughter. Using chorus, opera and oratorio, the text references the “polyphony of Polish-Jewish history.”

For Lech, verse-music experiments (or Gig Theatre) also “build on a largely feminist tradition of verse-derived experiments,” such as Ntozake Shange’s choreo-poems evoking the African American perspective. Shange’s larger aim “was to deform the language and its traditional modes of representation,” to “extend space for the inter-generational community of women, and by extension, all voices through the breath of verse-speaking.”

Such radical inclusivity animates Lech’s enthusiastic embrace of the power of poetry in theatre—an idea both timeless and newly discovered in this volume. The old/new art that Lech is at such pains to describe is one that intentionally deconstructs familiar theatrical forms to create an artistic continuum. As such, it is part of an important ongoing conversation among the spectacular range of voices from the multiverse in which we now live.

*Patricia Keeney is an award-winning Canadian literary and theatre critic as well as a widely published and translated poet and novelist. Her most recent books are the novel One Man Dancing (Inanna), based on the history of Uganda’s legendary Abafumi theatre company, and a collection of poetry and contemporary verse/theatre dialogues called Orpheus in Our World (NeoPoiesis), based on the earliest Greek hymns. Keeney is a professor of Literature, Humanities and Creative Writing at Toronto’s York University. Her website: wapitiwords.ca.