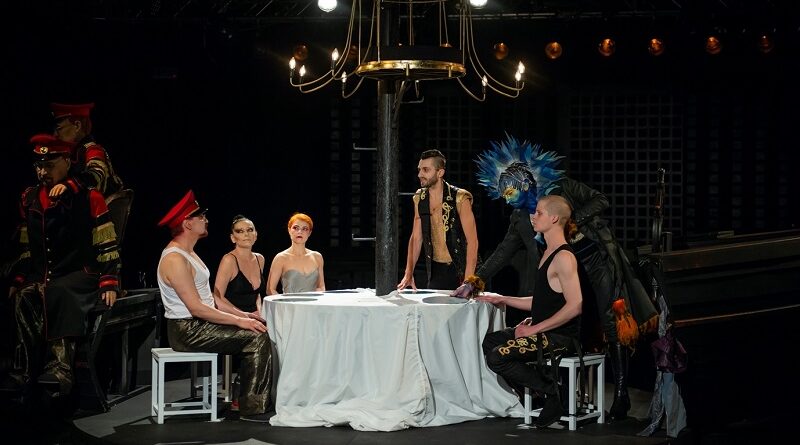 Romanian experts appeared to have the lowest confidence levels in the popularity of contemporary playwriting among all the countries we surveyed. Our data suggests that opportunities for local playwrights to earn their living are very limited and support systems are lacking for writers and translators. The state offers no incentives to innovate or work with living authors and, as a result, contemporary playwriting activity by state-funded theatres very much depends on individual artistic directors. State-run and subsidised theatres tend to work on a repertory system and employ salaried ensembles of actors, often catering for more conservative audiences who enjoy older, classical plays. By contrast, independent theatres, often collectively run by companies, have to apply for funding for every project, they tend to programme more new writing because they are able to take more risks, and they also tend to cater for younger audiences. Overall activity levels are considerable, and some green shoots are visible in a new generation of Romanian playwrights.

Playwright fees. It is very difficult—if not impossible—to sustain oneself through playwriting alone in Romania. Virtually every author has a second job, including the most established, frequently as directors, actors, teachers or journalists. On average, venues pay playwrights a fee of €1,000­–€1,500 to acquire the right to perform the play for three to five years. Adding a share of gross box office income—currently 5­–7%—is not common in Romania because tickets are very cheap, so the copyright is paid in advance and added to the fee. Once the copyright period covered by the initial agreement expires, another fee is negotiated, which is generally €500 per year. The fee level is the same for commissions—which are not common—existing plays. The majority of respondents affirmed that artists’ private money is needed to support creative periods. In terms of financial support, the National Cultural Fund Agency plays a part in subsidising writers and projects.

Translators fees. Theatre translators mostly earn a fee only and, less frequently, a combination of flat fee and percentage of box office (about a third of 5–7%). Most commonly, the translator’s fee also covers a copyright buyout for three to five years. According to an expert, “The average translation of a play is paid €1,000 for a production, and much less for a reading (€500 on average), while the foreign author receives 7% of box office until they have reached €1,000.”

Length of run and touring. Independent theatres work with block run schedules, while state theatres have a repertory system and employ ensembles. New play productions tend to have short to mid-length runs of one or two weeks in independent theatres and, occasionally, tour to other national venues after the premiere, but they do not tend to tour internationally. According to an expert, “In state-run theatres, new plays run for at least one year and are performed on average once a month, but don’t tend to tour anywhere, while new productions of international plays in translation tend to be on repertory for 1-3 years and sometimes tour nationally.”

Exchange with other media. Playwrights in Romania do not often write for film and TV, and exchanges with other media are very infrequent. Contemporary plays are often programmed on radio—yet not specifically commissioned for this medium—with the programme Teatrul Național Radiofonic being the most popular. Romanian TV also programmes new plays (the TVR3 cultural channel and Television Theatre department produce a handful of shows a year by established authors). However, one expert commented: “Radio and TV don’t really help support the culture of new playwriting.”

Gatekeepers. Our respondents agreed that the main gatekeepers in the field are artistic directors and stage directors, who have the power to decide what plays are staged. One respondent commented: “While younger directors (in their 30s) will often work on Romanian texts, established directors—those who work in the large state theatres—avoid texts that have not been validated by national prizes or international success.” One respondent commented: “The interest in contemporary plays is theatre director driven. If a theatre director proposes to an artistic director a contemporary play—this is it. There are no clear strategies toward contemporary drama in Romania. Often programming feels arbitrary and it seldom includes contemporary playwriting.” Another respondent commented: “The theatre system in Romania is director-focused and their proposed projects.” Most venues have “literary secretariat departments,” whose job description however does not include considering unsolicited scripts or making recommendations for selecting plays to add to the repertoire. Translators also have a key role to play, but their power only rests in the extent of their network and social capital; depending on this, they are able to promote playwrights from other countries.

Initiating a production. According to our respondents, the most likely way for new play productions to be initiated in Romania is for directors or companies to contact authors, or for authors to pitch to directors and companies, and for the director/company to then pitch to a venue. On fewer occasions, it is venues who decide to stage a new play by a specific author in collaboration with a director. There is no established tradition of venues commissioning new plays from authors in Romania. In terms of making productions of a play in translation happen, the most likely pathway is that local directors know about or develop relationships with foreign playwrights, or translators propose new play translations to directors or companies. Alternatively, but this is a lot less frequent, venues source foreign plays, or develop relationships with foreign authors, or commission translations of new foreign plays.

Agencies. The local societies of authors, which are supposed to collect copyright fees for authors, are not very widely used. Romanian authors do not rely on commercial literary agents to promote them, as every author is used to promoting themselves.

Prizes. There are some prizes dedicated to contemporary playwriting in Romania, including: the Play of the Year Prize by UNITER (also known as the Fundația Principesa Margareta Prize for Dramaturgy); the National Dramaturgy Contest organised by National Theatre Timișoara; the Best Romanian Comedy organised by the Comedy Theatre in Bucharest; and draMA, an annual playwriting competition organized by the theatre of Odorheiu Secuiesc. However, one expert commented: “Winning these prizes does not tend to have much of an effect on playwrights’ careers.” Residencies are offered by Reactor in Cluj (Drama 5), Macaz Theater Coop in Bucharest, the Iași Festival for Young People and Transylvania Playwriting Camp (co-produced with The Lark in New York).

Higher education. In Romania, theatre universities, such as the Faculty of Theatre and Television at the Babeș-Bolyai University in Cluj-Napoca, coincide with conservatoires and offer practice-based teaching. Romanian universities offer BAs in Acting, Directing, Choreography, Puppet Theatre, Theatre Studies and Music Pedagogy. At undergraduate level, there are no specialist playwriting courses, but some courses teach devising techniques and basic dramaturgical structures. At postgraduate level, the University of the Arts in Targu Mures (UAT) and the National Theatre and Film University I. L. Caragiale of Bucharest (UNATC) currently offer 2-year MAs in Playwriting. There are also more informal educational opportunities, such as workshops, offered by venues such as Replika in Bucharest and Reactor in Cluj, and masterclasses during theatre festivals.

Publishing. Contemporary plays by contemporary authors are “rarely” or “never” published as books in Romania as there is no market for play scripts. However, arts and culture publishers, such as Tracus Arte, Timpul, Cartea Românească and Charmides, sometimes publish plays. On the whole, plays that are released as books tend to be published by organisations such as theatre venues that also have small publishing branches. For instance, UNITEXT is the publishing branch of UNITER, which publishes the Play of the Year winner every year. Nemira and Liternet.ro publish some plays online and as e-books. The Camil Petrescu Foundation, which publishes the theatre magazine Teatrul Azi, also publishes plays and books on contemporary dramaturgy.

“Meet as many Romanian directors as possible, for now they are pushing new plays on Romanian stages.”

“Contact the Fabulamundi partners in my country, to find a good translator that is connected to the theatre scene, then establish a good relationship with a well-connected translator.”