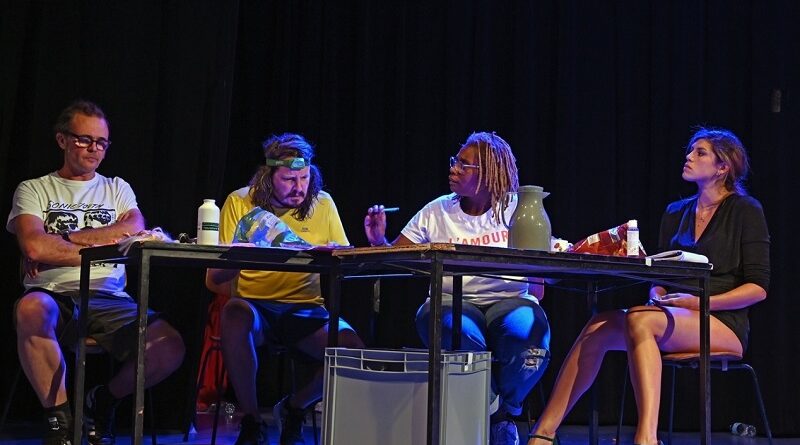 France has built a supportive environment for theatre-makers and playwrights through sustained state funding of the arts and a nurturing interest from theatre gatekeepers, such as artistic directors, and from audiences. Yet according to our respondents, levels of activity in the field of contemporary plays are shrinking. One expert affirmed that: “The overall impression one gets from France is that it’s currently not producing many contemporary plays, if compared with the U.K., for example.”

Our survey showed that 55% of respondents think French theatres “regularly” programme contemporary plays, while 35% think they are “sometimes” programmed: that is 90% in total. 20% of respondents are confident that “most” French audiences and makers are interested in contemporary French plays, while 60% think “some” are and 15% think that they are generally not. Our respondents’ view is that French audiences and theatre-makers are marginally more likely to be interested in contemporary plays in translation, but the distinction is nearly negligible.

One of the issues that emerged from the conversations we had with experts was that our survey respondents were almost entirely working in the subsidised sector, and their responses did not consider the commercial sector. However, the commercial sector also works with living playwrights. Sadly, the two sectors seldom cooperate, so the present report focuses on the subsidised sector.

Playwright fees. According to the majority of our respondents, it is difficult to sustain oneself through playwriting alone in France, and many authors have second jobs in teaching, directing, acting or similar, including some of the most established. Playwrights tend to be paid a fee of between €2,000 and €5,000 for a commissioned play, depending on the theatre and on the stage of their career, plus 10% of gross box office intake. If the play has not been commissioned, it is common practice to offer playwrights 10% of box office only. However, French authors can count on funding opportunities offered by the state to support themselves during writing periods.

Translator fees. Translators of contemporary plays tend to be paid a fee of between €500 and €2,000 for a new translation of a contemporary play that has been commissioned, again depending on the status of the theatre and the playwright, plus a 10% of box office split (30/70) with the author. If the translation has not been commissioned, it is often offered a share of copyright only.

State theatre funding. France is one of the largest cultural spenders in the European Union, especially considering absolute numbers (Budapest Observatory). The French central and local governments subsidise a tiered network of theatres in each region and generously supports theatre freelancers, also known as the “intermittents du spectacle.”

Length of runs and touring. New play productions in France tend to have short to mid-length runs of one or two weeks. Productions often tour to other national venues after the premiere and, sometimes, also to other French-speaking countries, such as Belgium, Switzerland or Québec.

Play development funding. There are many funding streams supporting thedevelopment of new plays, so it is not necessary for authors to self-fund development work. Authors wanting to take the time to write new work can apply for money via E.U., national, regional and city councils or other state-funded bodies or funds, but a minority of authors do fund these creative periods through private money. The state-backed organisation ARTCENA (previously named Centre National du Theatre) helps theatre-makers, including playwrights, with development funds. The scheme, called Aide à la Création des Textes Dramatiques, offers cash bursaries for authors and further funding if new plays are staged, and it applies to both contemporary plays written in French and foreign-language plays translated into French. The French Ministry of Culture, the Fondation Beaumarché, the SACD (Societé des Auteurs et des Compositeurs Dramatiques) and the Centre National du Livre also offer support for writers to develop new work. La Chartreuse in Villneuve, near Avignon, provides free spaces for authors to write intensively for short periods.

Exchange with other media. French playwrights sometimes write for TV, film or radio, and the exchange between media is common but not the norm. Contemporary plays are often programmed on France Culture radio station, which regularly commissions new radio plays.

Gatekeepers. Artistic directors of venues, companies and festivals play a big part in selecting new plays for production. Some big venues have an artistic advisor or dramaturg who is in charge of selecting plays, or, sometimes, the shortlisting process is taken over by reading committees. Literary departments attached to venues, whose task it is to select writers and plays for production, exist only in very few institutions, such as Théâtre Ouvert, la Colline, La Manufacture/La Mousson d’Été, TNS, Comédie Française and Rond Point.

Maison Antoine Vitez. France is unique in Europe for having an institution specifically dedicated to the translation of foreign plays into French, namely the Maison Antoine Vitez (MAV). This extraordinary institution, entirely supported by the Ministry of Culture and Communication, provides funding, training, talks and general assistance to theatre translators and foreign authors. The Maison Antoine Vitez supports fifteen new play translations from foreign languages into French every year with around €2,500 each, selected by language committees and a panel of theatre-makers. The Institut Français, which is also funded by the Ministry of Culture and by the Ministry of Foreign Affairs, promotes French culture and francophony around the world, including some translations of French plays into other languages. The SACD also offers funding streams specifically targeting the translation of new plays.

Agencies. Commercial literary agencies that promote playwrights are not a common model in France and, as a result, most French authors do not have an agent whose task it is to represent them. The SACD acts on behalf of authors to collect copyright fees.

Initiating a production. The most likely way for new play productions to be initiated is for directors to commission new plays or, alternatively, for playwrights to pitch plays to directors or companies. Less frequently, venues or producers commission or select new plays from writers. In terms of making productions of a play in translation happen, the most likely pathways are either venues sourcing new plays via French directors, or developing relationships with foreign playwrights or directors, or translators pitching translations of new plays to venues and directors.

Prizes. The most prestigious prizes for contemporary playwrights in France are the Molière Prize for Francophone Living Author; the Grand Prix de la Littérature Dramatique; the Grand Prix du Théâtre of the Académie française; the SACD Prize; the prize of the Journées de Lyon des auteurs de Théâtre.

University theatre departments also offer BA and MA courses in playwriting, directing and dramaturgy, which include some practice, such as the Sorbonne Nouvelle-Paris 3; Université Paris Ouest Nanterre; Université Grenoble Alpes. Short professional-level courses and development opportunities are offered by institutions such as La Mousson d’Été, Théâtre Ouvert and La Chartreuse.

Publishing. Contemporary plays by established and emerging authors are regularly published in France and they are also very well distributed in both independent and chain bookshops. There are many publishers that specialise in theatre, including in texts by living authors and plays in translation. The most prestigious and best distributed publishers are: L’Arche; Actes Sud Papiers; Les Solitaires Intempestifs; Éditions Théâtrales; Éditions Espaces 34; Éditions Quartett; and Éditions Théâtre Ouvert/Tapuscrits.

“Have your work translated into English (or better, into French with a good translation) and then send it to the most influential reading committees in France to get you work selected and produced by them (those committees include: Artcena, La Mousson d’Été in Pont-à-Mousson, Théâtre Ouvert in Paris, Théâtre national de Strasbourg, Montevideo in Marseille, and La Comédie-Française in Paris).”

“Send your plays to the local partners of Fabulamundi (Mousson d’Été and Théâtre Ouvert for France) or get in touch with a translator at the Maison Antoine Vitez, or translate it into French and send it to reading committees (Rond-Point, Theatre de la Colline, de Strasbourg . . .).”

“Send your text to La Maison Antoine Vitez and to publishing companies such as L’Arche or les Éditions Théâtrales.”