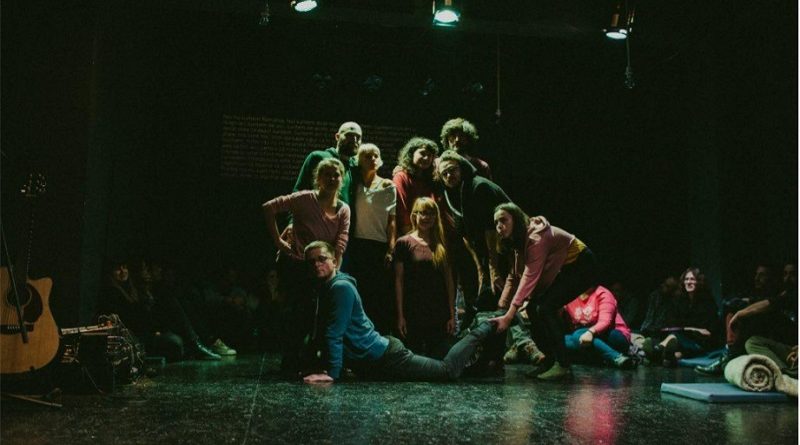 The dunaPart festival is billed as “Platform in Hungary,” but it might be better labeled as “Platform of Hungary.” An oft overlooked part of Eastern Europe, the participants often had to tread a line between being cultural ambassadors and artists. When I look back at the experience there are three pieces, all of which I enjoyed, that typify three different approaches to this problem.

Us/Them (2014) was written by the Belgian Carly Wijs and was one of relatively few established pieces presented at the festival. The play portrays the experiences of two children in terrifying times and was performed the Juryani Incubator House in Buda. The piece is set in a school gymnasium that serves many purposes while never surrendering its specific architectural identity of a flexible learning space. The play opens with two actors (Benett Vilmányi and Lili László) partaking in what would seem like any other school presentation in any other school gymnasium about any home town. There are all the numbers that students tend to memorize to impress teachers: one thousand, two hundred and twelve houses are in the town, fifteen warehouses, the school (the largest building, we are assured) and four churches. The performers are so engaging that it’s easy to imagine listening to them talk about their town for the whole of the show’s 60 minutes.

The presentation takes a sudden turn when the characters detail an armed occupation of the school and use classroom supplies to simulate the horrors taking place in the gymnasium. Yarn becomes tripwires, balloons portray bombs, and a workbook is substituted for a kill switch. The boy and girl start to sweat as they detail the lack of water and the cramped conditions. They dream about all the fathers of all the children riding tractors in to save them.

They keep a tally of those left alive on the wall.

The Orlai Productions show, directed by Balázs Benő Fehér, is the first time anyone besides Wijs has professionally directed the piece, and both the performers and Balázs deserve immense credit. They never allow the tragedy of the scenario to make the children any less childlike, which of course only heightens the tragedy of the piece as a whole. Even as the walls start to close around the protagonists and hope gets further away, they see the situation from the eyes of children and force the audience to remember what it was like to be young and unable to help yourself when the time came.

Anyone who watched coverage of the 2004 Beslan school siege will know how this story ends, but the script goes to some lengths to make the whole production understandable no matter who is in the audience. This takes a modern tragedy and manages to make the actual human cost stand out. It speaks to the modern audience through a unifying experience of childhood, and that is a remarkable accomplishment.

Observers, performed at Trafó, on the Pest side of the city, opens with Horváth (portrayed with frustrated professionalism by Péter Jankovics) entering a small room with curtains drawn on all sides and decorated in the style of the 1960s. He calmly pulls out a camera, points it at the audience and projects the live feed behind him.

“It is in your best interest that we record you,” he knowingly intones.

It is as direct an interaction between performer and audience as I have ever seen, and it’s utterly, hysterically, tragically, brilliant.

The production, written and directed by Kristóf Kellemen and dramaturged by Tamás Turai, deals with the Soviet era informants Horváth recruits to spy on a suspected western agent Michael Besenczy (played with a sort of terrifying blandness by Tamás Rétfalvi). The first observer brought into the fold is the nervous and weak willed Somogyi Sándor (portrayed by Baki Daniel), who is hiding his homosexual urges and actions from his family and his newly minted fiancé Judit (portrayed with a naïve and well-meaning nature by Bettina Józsa). Horváth blackmails Sándor, who studies and has a sexual history with Michael, into spying on his peer. But Sándor swiftly proves comically unreliable, and, trying to salvage the situation, Horváth brings in more “observers,” including the art school bound Judit, who coincidentally is his niece, and Erzsi (the sultry Iringó Réti), a former prostitute whom Horváth knows from his days a policeman.

Observers shows how intoxicating it is to be privy to the lives of others. Sándor is the prime example of this, as he finds himself endlessly drawn to the people around him in more and more perverse scenarios. It starts with men in the park, then to a fascination with Michael and Horváth and finally, tragically, to the random man who beats and robs him at the end of the show.

There’s an eroticism to surveillance, to watching and being watched, that regular theatre goers encounter so much they can forget it exists. This play is a reminder to audience that to watch another human being is a privilege, not a right, and when we allow others to watch us, we give up almost all of ourselves. None of the characters realize what they are giving up when they cave to Horváth’s demands, and all of them prove incapable of handling it. Personal miscalculations compound until political ramifications are felt, and even those who thought they were in control can only stand back and accept their powerlessness. The play draws a direct line between the actions of the one and the actions of the many and finds its audience in the pitfalls of its characters.

The production is particularly successful at evoking the feel of Soviet era Hungary and the fear that ran through “eastern Europe’s gayest barrack” during the Soviet’s wrathful rule over the unruly nation (Legyel). It helps to know the story of the Hungarian Revolution of 1956 and the long painful history of queer artists in Budapest, but the production tells you enough that you’re never lost and is an equally funny and tragic piece.

99.6 was probably the most ambitious work I saw at the dunaPart and ranks in the top ten of the most ambitious works I’ve ever seen. Performed in the basement theatre of Három Holló (Three Ravens) Café in Pest and devised by the Reaktor group, 99.6 finds the performers of Reaktor playing themselves, or near approximations, as they deal with the cultural fallout of the dividing up of Austria-Hungary after World War I, an event known as Trianon.

Reaktor is composed of artists from the Hungarian speaking region of Romania who live in the shadow of Trianon. The play begins with the creator-performers sitting on the ground as the audience files in before they lean forward and start to whisper stories of their childhood to the assembled audience. This leads to them leading the audience to charts outlining the performers’ genetic differences, a word and movement collage containing bits of playground stories, and a group performance of a folk-pop dance song called “Made in Romania.”

It’s a sometimes-confusing mix that is held together by the emotional connection to present and past traumas caused by shifting borders. It depends on the audience not only knowing what Trianon is but also having strong empathy about how damaging the splitting of the nation was. There were genuinely moving moments and the concept of the piece as a whole is fascinating, but it asks a lot of the audience, and probably too much for the international audience that came to dunaPart.

*Cole J. Stern is a dramaturge, playwright and theatre critic currently in his thesis year in the Columbia University Dramaturgy MFA program. He has dramaturged Torn Out Theatre Company’s production of The Rover in Prospect Park, Patience by Johnny G Lloyd at the 2019 Corkscrew Festival and numerous student productions at Columbia University. His play Being in Time, co-written with Zizi Majid, was selected for performance at the 2019 Human Right’s Arts Festival. Cole is the Founding Program Director of the Wasatch Playwright’s Residency.