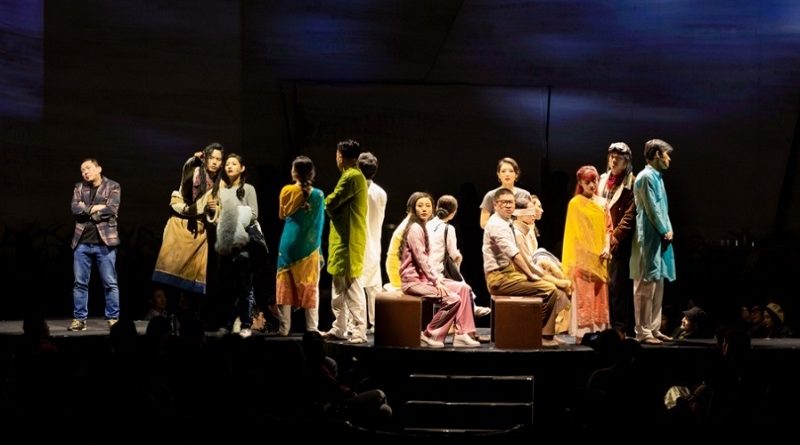 With a playing time of over five hours, Stan Lai’s latest work, Ago,[1] is a rarity in today’s Chinese theatre landscape. However, compared with the themes the playwright-director explores, five hours seem but a fleeting instant.

Lai, long considered the most accomplished playwright writing in the Chinese language (he is from Taiwan but works in both China and Taiwan), has written and directed an epic work of vast richness that is sure to be compared with his eight-hour opus A Dream Like a Dream (2000). Over three hundred characters take up residence in the 81 scenes of this multi-faceted work. Shaped like a Tibetan ritual, dorje, that places much of the audience in four pockets embedded in the playing space (like the Chinese character “田”—tian meaning field), Lai’s innovative stage/audience configuration offers a new theatrical experience. Audiences in Asia are familiar with a similar configuration, often referred to as “The Lotus Pond,” first used by Lai in Dream twenty years ago in Taipei, and later in productions in China, Singapore and Hong Kong. Those seated on swivel chairs within the performance area are able to shift their focus as the story unfolds around them and immerse themselves, as Shannon Jackson remarks, “to experience the interconnectedness [of all the elements] at the deepest level.”[2]

Ago tells the story of a group of ethnic Tibetans in China’s southwest who survive a lethal earthquake which levels their village. Ten years later, they have migrated to New York, where they experience the terror and calamity of 9/11. Among them are those gifted with special powers: Tashi can talk to animals; Dorje sees constant visions of a Pure Land where he yearns to take everyone to; Space can see every being who has ever occupied whatever space she is in. Whether in the mountains or in New York, they all gravitate around the main character Pema’s noodle shop. After the two calamities, they gather together and go to Sikkim to find the Pure Land, where further adversity awaits.

In my opinion, Ago exceeds Lai’s eight-hour epic Dream in terms of scope and magnitude. The acting company is Lai’s own group in Shanghai, with the addition of one of China’s most renowned theatre and film actresses, Hao Lei, as Pema, and pop star Zhang Jie as Dorje. Lai has also called on two stalwarts of his Taiwan company, Chu Chong-heng and Fan Rui-jun (who have both performed in Lai’s noted works The Village and Secret Love in Peach Blossom Land), who turn in extraordinary performances as Strong and Space. Many of the characters are not human—Lai has written many roles for animals and god-like figures that may or may not exist, as well as abstract concepts such as Time and Chance.

Like all of Lai’s work, Ago works on many levels, by intersecting complex characters and their life stories with different layers of reality and perspective. Ago spans three decades of the bittersweet dance of joy and sorrow within the lives of these characters in three locales—the mountain village in southwest China, New York City with its mean streets and big lights, and the remote Himalayas of northern India—each of which represents a unique facet of civilization. As the play progresses, a series of conflicts and comparisons start to filter out: tradition and modernity, local and global, material desires and spiritual quests, love and betrayal, Shamanism and science, egotism and altruism. Framing it all, Lai poses the crucial question: What are people seeking when they undertake the journey of migration?

Ago is about migration; a narrative that concerns the human condition in the modern-day world as well as the time when the first homo sapiens set out from Africa at the dawn of history. In ancient times, humans migrated in order to survive, but in the modern era we also migrate to pursue our dreams. However, even the most advanced city falls short of being the ultimate destination of the grand migration of mankind. In Ago, some look forward to salvation by extraterrestrial civilization, others venture deep into the most sacred mountains, all seeking the Pure Land in their mind’s eye. Whatever their belief, their efforts serve as a parable that illustrates the fragility of human existence in the world we live in.

If A Dream Like A Dream is a continuous sequence of dreams, delving deep into the subconscious, then Ago can be described as an unending expedition from one civilization to another, an exhibition of mankind’s collective desires and anxieties. In Ago, the quest for the Pure Land does not rely on coordinates on a mythical map. Instead of a concrete, material path, at the end of the journey, in Pema’s quiet Brooklyn noodle shop, Lai suggests in the stunning final scenes of Ago that it is the power of love and compassion that may illuminate our way forward.

Like a mirror, an artist’s work reflects how he or she approaches and makes sense of the world. In his book Stan Lai on Creativity (in Chinese only, Guangxi Normal University Press, 2011), highly influential in the Chinese world, Lai points out that an artist’s work comes through inspiration from the external world, which blends with one’s own life experience and value system, creating the choices that create the final work. A long-time practitioner of Buddhism, Lai freely instils Buddhist philosophy into his work. The Buddhist wisdom of “unconditional kindness and universal compassion” can be easily discerned in Ago, amidst the rubble and destruction, but before we start talking about a “Buddhist Theatre,” we realize that Lai seems to be questioning what use is the goodness of the Mother Earth-like Pema, in the shadow of all the suffering? Her yearning for a Pure Land is not so much religious, but the simple wish to be able to live life free from random disaster and suffering. In this way, Ago transcends the confines of religion and culture, shedding light on the universality of humanity.

In Ago, one of Asia’s most important theatrical voices, Stan Lai, has brought to life yet another illuminating theatrical spectacle. This unique experience, in the words of Shannon Jackson, who invited Lai to compose the piece at Berkeley, is “a new kind of theatre, one equipped to respond to the pressures of the 21th century.”[3] It certainly shows us the difficult path ahead for our fragile and increasingly conflicted world.

[1]Cengjingrushi《曾经如是》in Chinese, literally “Thus before.” Ago is the English name used in the workshop production developed in English at the University of California, Berkeley, in April 2019, at the invitation of Shannon Jackson, and the playwright’s choice for the English title.

*Yu Kuo-Hua is Dean of the Graduate School of Arts Administration and Management at Taipei National University of the Arts. He received his PhD in Literature from Peking University School of the Arts. Yu is Chairman and Secretary General of the Performing Arts Alliance of the Republic of China. Apart from being a critic, he is also a visiting professor at the Cultural and Creative Industries Teaching and Research Center at Macao Polytechnic Institute.