Over the past 25 years the Chekhov International Theatre Festival in Moscow has been responsible for showing to Russian audiences the best productions from theatre masters from around the world. Valéry Shadrin is a proud man and a fearless defender of an event that has helped to sharpen the relation between Russian theatre and the international community.

So many famous names that have been for decades the theatrical reference beyond the frontiers of their own countries—the likes of Peter Brook, Peter Stein, Arianne Mnouchkine, Spanish modern ballet dancer and choreographer Nacho Duato, Swedish choreographer Mats Ek, Robert Lepage and French director Emmanuel Demarcy-Mota—have managed to find in the heart of Moscow a new stage that goes beyond the political and the ephemeral.

As General Director of the Chekhov International Theatre Festival and President of the International Confederation of Theatre Associations, Valery Shadrin was most recently honored with a Chevalier of France’s National Order of the Legion of Honor. He received this recognition in October 2013 for his “great contribution to the strengthening of cultural ties between Russia and France,” ITAR-TASS reports.

This high honor was presented on behalf of the president of France by Jean de Gliniasty, the country’s ambassador to Russia.

In 1992 Valery Shadrin was one of the initiators of the Chekhov International Theatre Festival, which was held this past summer in Moscow for the 11th time. This year the festival spanned nearly two months, and included 59 performances in Moscow as well as another 40 in St. Petersburg, Khanty-Mansyisk, Voronezh, Yekaterinburg, Samara and other Russian cities.

Calling the Chekhov Festival an “international cultural scene,” Ambassador Jean de Gliniasty emphasized that this event has for 20 years given substantial attention to French theatres. It is already known that the next Chekhov festival, in 2015, will include six performances by theatrical troupes from France.

TIAGO BARTOLOMEU COSTA: How was it at the beginning?

VALÉRY SHADRIN: Our festival has been around for more than 20 years. It was born with the new Russia—during the period of perestroika, in a time when theatre was not the new Russian society’s main priority. Maybe theatre was being staged on the streets, and even on TV, and people did not find it relevant to go to theatre. What mattered to the people was The Supreme Soviet.

We could say that people were less keen on theatre than they are today. A friend, a very well-known stage director, once asked me if I was crazy to endure with the festival. But we always had the feeling that if we insisted, we would prevail. We believed that we should foster our public role—the essential role—theatre plays in our society, particularly during the difficult period of perestroika.

After the fall of the Berlin Wall in 1989, having found ourselves in an open space community, we insisted that we should present what we did not know, like the work of great masters such as Peter Brook or Peter Stein.

How was it possible to work with such artists so that the work would not be seen as political?

During the communist period, theatre was very political—it was propaganda. Back then there was a very thin criticism of what was happening in the USSR. Our goal was to find ways of working, since the truth was that theatre was at the avant-garde of perestroika. We never wished to focus on the political, nor have we discussed the political convictions of Peter Brook, Peter Stein or Arianne Mnouchkine, to name just a few of those we have invited. We have, of course, discussed artistic convictions, but that came from our intention of focusing on the immense and universal quality of their work.

Was the audience aware of that change of perspective?

We needed to create a tradition in Moscow and that meant to create an audience. Back then only the intelligentsia was used to going to the theatre, but today things are quite different. There’s a new middle class and even a new intelligentsia that have become more present and that look for shows that can not only be theatre but also dance and street performance. And not only in Moscow. One of our last shows, Murmurs des Murs, by Victoria Thierrée-Chaplin, was a new-circus performance that toured six different Russian cities under our patronage.

How could you define what’s at the core of the relation of the festival with the companies?

Can you identify the influence the festival had on Russian theatre?

It’s possible to say that this happened in two ways: The German theatre and opera director Peter Stein has frequently directed operas in Moscow, and the choreographer Nacho Duato became artistic director of the Mikhailovsky Ballet Company in Saint Petersburg. We were the first to bring these artists to Russia and their productions have been regularly seen on our stages. These are two examples that make us proud to have, in some way, been a part of.

It is true that in the beginning the Russian theatre sphere was less keen on the Chekhov International Festival, but with time the landscape has managed to cope with our approach. We have been inviting Russian artists to our festival since the first edition, in what we call “Russian Focus,” which features mainly companies from outside Moscow, but the Golden Mask Festival is the main forum for Russian theatre to be presented. Our task is a different one. What we do is to focus on the youth through master classes and workshops, for instance.

In terms of dramaturgy, has international theatre helped to develop new dimensions for the Russian dramaturgy?

There are not that many contemporary authors in Russia nowadays. I would not say that authors feel threatened by what we could call “the weight of History,” but I would assume that the situation in which we live in does not foster artistic development. It’s a very fragile situation when compared with the 19th and 20th centuries. Authors do exist, but I believe they find it easier to adapt a classic than to create a new text.

Do you think it’s a matter self-censorship?

No, I don’t think so. Many of the artistic bears that existed during the period of the USSR where censorship was practiced nowadays do not exist anymore in Russia. People will say it’s censorship just because something is in bad taste. I give you one example. There’s an enormous décalage [deviation or diffraction] between the literary language and the theatrical language. Russian is a very crude language, unlike the French language, for instance. There’s a dimension of the Russian language, a language that is raw, that is not as compatible [in a public space as in a private sphere]. It could function as [printed] literature but not on a stage.” 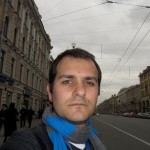 [1] Tiago Bartolomeu Costa is a dance and theatre critic from Portugal. Working for the newspaper Público and founder of the performing arts magazine Obscena, he is the receipient of the International Cultural Leadership Award by the British Council (2009–2010) and the International Prize for Cultural Journalism Carlos Porto (2011).

“Theatre Was at the Avant-Garde of Perestroika” — Interview with Valéry Shadrin, General Director of the Chekhov International Theatre Festival in Russia