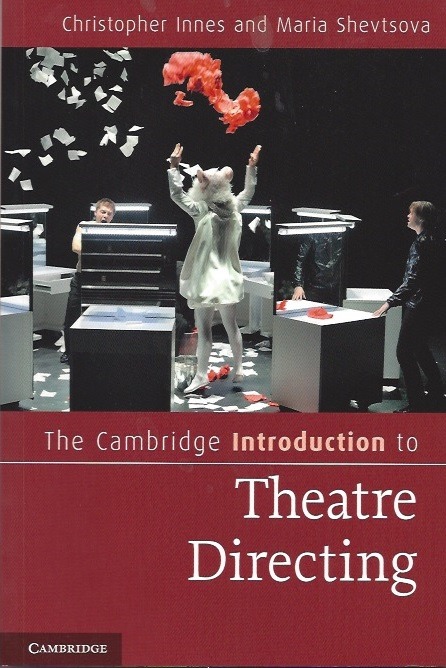 Anyone seeking a really good one volume overview of the history and practice of directing from the ancient Greeks to today would do well to take a close look at this new volume from Cambridge put together by the Canadian scholar Christopher Innes and the Russian-British scholar Maria Shevtsova. Both are extremely au courant with the latest trends in Euro-American mise en scene and are totally fluent in the evolution of the form in the west. Missing here unfortunately is anything connected to Asian or African theatre but that probably would have been pushing it a bit in a quick survey such as this one.

For all its quickness, however, it is absolutely authoritative in what it does cover and it covers a lot. In setting up the field and addressing the evolution of the director in the classical theatre, it ranges from Greece and Rome to the Medieval period and the Renaissance ending up with the appearance of the actor-manager and focusing on figures such as Henry Irving and Gotthold Lessing.

The rise of the modern theatre begins in Germany for Innes and Shevtsova with the Meiningen Players, with Andre Antoine and his Theatre Libre and includes the directorial visions of Wagner, Appia and Craig ending with a look at Stanislavski and his work on psychological realism.

Moving into non-realistic areas, Meyerhold and Vakhtangov are given quick looks as are Piscator and Brecht. A chapter on the director as auteur features quick sketches of figures such as Max Reinhardt, Peter Brook, Robert Wilson, Peter Sellars and the Canadian Robert Lepage. Modern German and Russian figures are privileged somewhat in a chapter on directors connected with ensembles such as Peter Stein, Georgio Strehler and Lev Dodin.

Barba makes several short appearances in the book while Britain and Eastern Europe get some due in the work of Katie Mitchell and Declan Donnellan, Simon McBurney, Grotowski, Wlodzimierz Staniewski and even Jaroslaw Fret.

If there’s a problem here it is in the premise itself that any single volume can do justice to the work and ideas of so many people over so long a time period. Even the modern period, even the contemporary period leaves out so many. Where is the American Anne Bogart? Where is Tadashi Suzuki? Where is Andrzej Wajda?

But then this volume rather seeks to be an introduction to the emergence in our own time of the director as prime mover, prime creator. The two authors here are mostly seeking to identify new patterns and approaches more than they are intending to simply introduce a display of world names. As they put it realistically, they are following patterns more than anything else, and “the patterns we have traced show knots of interconnections, which means that a director whom we have grouped in one way belongs just as readily in another grouping: this is the case of Brook who appears in various chapters.”

Of their missing Asian and African sections, they write only: “our task to unearth the roots of the modern director necessitated a European focus” though it is not clear why the focus could not have been truly international. Nevertheless such an introduction to directing, as they admit, “could not hope to be fully comprehensive from whichever point of view we took.” They conclude by saying clearly: “Our intention was to provide various vantage points from which our readers could begin their journey.”

Perhaps a future book will look at the field more comparatively rather than in what still will seem to some a very linear and traditional Euro-American way. What we are given here is useful but it is also merely scratching the surface of a very complex area of study. That the scratching is by two rich and sophisticated theatrical minds is what ultimately makes even such a modest volume as this one a valuable introduction to an immensely complicated field.

[1] J. Herbert Close is a theatrical researcher and critic who has lectured and worked in the United States, Mexico, China and Sweden.

The Cambridge Introduction to Theatre Directing