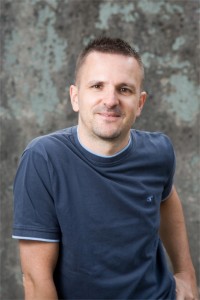 The talent of the actor is one of the most elusive phenomena. Among Slovene theatre researchers, Blaž Lukan focused on this subject earlier in his contribution How to conserve the actor presented at the symposium The elusiveness of theatre conservation held at the Maribor Theatre Festival in 1987.[2] In his later texts, the emphasis shifted to selected roles from contemporary productions. Lukan makes a departure from the linear approach of theatre criticism: “The actors don’t speak through a description or psychology of sorts, but through their body and its life.”

Marko Mandić, born in 1974, graduated from the Academy for Theatre, Radio, Film and Television in Ljubljana. After his studies at the Lee Strasberg Institute in New York, he joined the ensemble at the Slovene National Theatre Drama Ljubljana in 1998, and in 2009 received the Prešeren Fund award for his theatrical roles. Mandić also created a number of roles in the framework of Via Negativa, a contemporary performing arts project initiated by artistic leader and director Bojan Jablanovec. Within the performance series Via Nova in 2009, he created two solo performances, Ekstrakt Mandić and Viva Mandić, and in 2011, Mandićstroj (MandićMachine).

MandićMachine stages 38 torsos of the roles created during the period of 1996–2010 in Drama Ljubljana, as well as in smaller venues such as Mini Theatre and Glej Theatre, in the structure of a collage. Every role is articulated and conserved inside the broader frame of Mandić’s oeuvre, from his first professional role in The Indian Wants the Bronx by Israel Horovitz to his Tinker in Sarah Kane’s Cleansed, and from roles in Welsh’s Trainspotting, Kureishi’s Outskirts, Barker’s Europeans, Enda Walsh’s Disco Pigs, C. Churchill’s Far Away, Ma & Al after J. D. Salinger, to Macbeth in Heiner Müller’s Macbeth after Shakespeare, Strahlski in Kleist’s Das Kätchen von Heilbronn, Bassanio in Shakespeare’s Merchant of Venice, Chekhov’s Platonov, and many roles in Slovene national drama by Ivan Cankar or Ivo Svetina.

A homo ludens in front of us plays his game, being unbound by prejudice or limitations, and does not obfuscate any of his roles. He reveals that the memory of the actor is a carbon paper, a sponge that absorbs everything, until it is “overwritten”, a sort of palimpsest. However, the fuel of the MandićMachine is not pure fragmentation.

The roles make up a thread of substance regardless of their original success. Therefore the manner of staging is not ostentatious. What attracts attention in the actor’s recapitulation is not the inner logic, not how the roles are put together, but the performative strength of jumping from one state of mind to another that in this flattened, televised era enables us to feel the theatre in its flesh.

Mandić takes over the attributes of a machine, of its irrational and, in a way, comical fixation on reconstruction, multiplication or the erasure of moments, images, words, and thoughts. He constructs reality as an enterprise under control, also including some unexpected adrenaline shocks. As an actor, he is fixed only on the technology of one’s own self. The political strength of this excess is limited, but there is no artificial boundary left in the relationship with the spectators.

The performance involves the continuous inclusion of the spectators: Mandić is distributing some of his props (caps or crowns) among spectators in order to invite them later onto the stage in a most subtle way: he asks them to jump into a supporting role with their body and presence. The accidental visitors enable him to evolve his role anew. In this way, Mandić crowns the spectator: he acts to reach him/her and thus moves away from narcissism, at the same time tempting the spectator into the sphere of the imaginary. The audience’s identification with the fragile, numb individuals on stage, who are guarded by the star/actor, offers an extraordinary experience. Mandićstroj and Mandić himself become unique in this presence whose essence is pure theatrical playfulness.

This is how Marin Blažević and Bojan Jablanovec accompany the performance essay Mandić? What the fuck is Mandić? (2011): “Owing to digital technologies which allow us to virtualize, archive, transmit, mediate and network all kinds of data, nowadays it is possible to endlessly restore and reproduce, share and show, edit or delete the moments, images, words, thoughts of our life without a risky contact of two bodies, a suspense about reaction of somebody else. Our digital apparitions may be exposed and observed in the virtual world, yet our coexistence with others is becoming quite conservative—an interaction without a real risk. (…) It seems that insistence on the body and live presence is nowadays, and already, an anachronism of liveness; that live experience, as “the subject of the work” of contemporary performance art, is simply no longer real without digitalization of presence.” (Performance Studies International Conference 17 in Utrecht).

Mandićstroj plays with roles at the meta-level, simulates them, already “withdrawn” from them, re-enacts them, as if the actor had never left and will never leave their trajectory (the relation between the “original” and “repetition” has often been dealt with in various performances of Via Negativa). Actually he has the freedom to play with copies of his live presence; to list and arrange his “portrait of the actor as a young man.” The auditorium is not faced with dead historical matters through which the actor would point out that he still masters them. Mandić tries out a new form of conservation of past acting material. In a way, he digitizes his own presence live.

Mandić jumps over the reductions of the written records and reduces himself on his own. He does not really want to get conserved and shows a different form of (auto)archiving. A live encounter can do more. As Vasja Predan said at the 1987 symposium, even a spectator’s memory of a single role reveals more than anything that can be read about the actor, and in a different way. It is as simple as that: physical experience gets recognized by a subjective gaze more easily. When the experience exceeds pure memory, the actor ceases to be an archeological fossil. The spectator catches the essence of Mandić in the live confrontation with him, this is what makes the actor paradoxically (instantly) eternal in the secret of his art, not tied to anecdotes or handy fables. 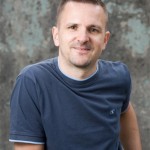 [1] Primož Jesenko (*1975) is a dramaturg, theatre critic and researcher, with particular focus on experimental theatre tendencies. He received his M.A. in Theatre Studies at the Academy of Theatre, Film, Radio and Television at the University of Ljubljana; his book Dramaturgical Concepts in Slovene Theatre 1950-1970 was published in 2008. He is editor of the journal Dialogi‘s performing arts section. He has participated in various research projects (i. e. TACE—Occupying Spaces: Experimental Theatre in Central Europe, National Theatre Museum of Slovenia; Performing Visuality, Performing Life, Maska Ljubljana) and numerous international festivals, exhibitions and colloquia (i. e. Exodos Festival, Ljubljana, 2006-2008; Performing Revolution, New York, 2009). Since 2012 he has worked at the National Theatre Museum of Slovenia. In 2010, Jesenko served as chair of the conference on Intercriticism at the Maribor Theatre Festival, co-organised with IATC/AICT.

The Live Digitizing of the Actor