Born in December 1968, the Bulgarian scenic designer Nikola Toromanov has been a member and co-founder of the Triumviratus Art Group, a collective whose activities focus on theater, performance, literature, video art and radio. The collective’s other members are playwright George Tenev and actor/director Javor Gardev. Triumviratus aims to rediscover the lost antique feeling for life, capturing its original, pre-ritual, vital breath, and using this discovery to leave behind what they call “the graveyard of post-modernism.”

Toromanov took his undergraduate studies in the fine arts department of the University of Veliko Tarnovo in Bulgaria, completed an M.A. in Scenography at Sofia’s Academy of Fine Arts, and had additional training at “Forum Junger Buehnenangehoeriger” at the Berliner Festwochen in Germany.

From 2011 to 2012, Toromanov’s design work has been international in its character. To wit, he designed the productions of Life is beautiful (The Suicide) by N. Erdman in Sofia; Prima Donna (The Compleat Female Stage Beauty) by Jeffrey Hatcher in Tel Aviv; and Hamlet in Sofia. In April 2012, he won Best Scenography for his work on The Visit by Friedrich Dürrenmatt, staged by director Alexander Morfov for Teatrul National Bucharest, a prestigious awarded given by UNITER, the Theatre Union in Romania. Toromanov’s scenography was also represented in Bulgarian’s national exposition at the 2011 Prague Quadrennial of Performance Design and Space in the Czech Republic.

EMIL ILIEV: You are currently working on Hamlet’s set design. How many times have you done Shakespeare’s plays? What is the difference this time?

NIKOLA TOROMANOV: In 2003 the director Marius Kurkinski and I staged The Winter’s Tale, very poetical play on empty stage with a blazing stove with huge branched outlet at the bottom. At the end of the scene there was a forest with statues of nuns, one of who reviving to forgive.

In 2008 we did The Taming of the Shrew—sharp, eclectic play, passing through different styles, balancing along the edge of good taste.

Director Javor Gardev and I have worked together on three Shakespeare plays. In 2000, while being at an party, we discovered the basement of an old wine-cellar in Varna (Dimyat wine cellar, which, unfortunately, I recently discovered no longer exists). The action took place in two parallel stone corridors (they were part of the architecture of the place); the audience (about 50 people) was “loaded” on an amphitheatre-train that was run by the brave stage-workers from the first country (France) to the second one (England).

In Adana, Turkey, we did The Storm (2004). The action took place on the deck of a luxurious ship, which crashes on Prospero Island and literally fills up with water. Sometimes our meeting with people from this theatrical culture reminded us of passengers and islanders, but overall it was a useful and funny experience.

King Lear, 2007: It was the first time when I could use the whole equipment of the stage at the National Theatre “Ivan Vazov.” The scenery—a metal box that transforms in various ways that marks time (rather than space) changes.

To some extent, we continue to explore these ideas (with the set designer Daniela O. Lyahova), but in a new way. Here, the topics are the pathways directly connecting the audience with the stage, the bridges hanging over the abyss, the great depth and the shallow space, the cutting touch of the metal bars, the shadows of the nets. We also worked with the elements of fire and water.

What is the interaction between literature and images?

The pleasure of reading a text, which is about to be visualized is huge. Probably it is the happiest moment of the whole process. Everything is yet to be explored, a whole world of (maybe) endless directions and possibilities. Often, the text turns against you; it fights back until the moment when you nail it down (or it nails you down).

Do you think that scenography is, or could be, a separate art? Do you have any examples?

If you go to a scenography exhibition, you can see great ideas in the scale models and sketches, but this could be noticed by experts with a sharp eye. Apparently scenography is part of the applied arts, and the success of a scale models depends on the general level of the performance.
If the question is, “Does vision make a performance?” It does as an exception but not as a rule.

I am thinking of Top Ten of the Best Set Design decisions in the history of contemporary theatre (from The Guardian). Three out of 10 are of Shakespeare’s plays. One of them is Hamlet from 1912 by Gordon Craig. Are brave classic designs prerequisite for a career jump? How do you feel about working with classic and contemporary texts?

It is a rule that brave decisions must develop the artist and vice versa. To me, there is no difference in the time when the text was written; I am not talking about the necessary inevitable research in both ways. What is important is to enter into it—to “read” and surprise myself in new directions, perspective or unexpected material.

What does “empty” space mean to you?

It is the hardest thing. To be able to “clean” the space; to rule and control it is like advanced flying.

Let’s not confuses empty, prematurely born stages, which have appeared as a result of the crises (financial or artistic), as well as the shallow “modern” decisions with the thought-through and well-executed empty (realized and executed by the requirements). The process of emptying the space is difficult; it is unique for each artist, and when achieved, it is a great victory.

Recently you competed and were fairly honored for your design work on the great stage of the National Theatre in Bucharest, Romania. There, you designed The Visit by F. Durrenmatt, directed by Aleksandar Morfov. A 20-meter stage. Tell us more about the mastering of such socialistic scales?

Yes, the space needed to be filled. Really huge hall—Ceausescu-scale. Inhabited by very serious experts. Enormous for our latitudes budget as well as the advantage of meeting new people and energies. We built a whole city. Besides the fact that it was not easy for the people, at the end we share the common pride and joy of what we did. I think that we managed to reach the balance between our naturalistic design and the theatrical poetry.

Do you have a current working process, which you can distinguish as greatly different by what you have done up to this moment?

An important part of my job is to communicate with all these different individualities, to keep my integrity, to be their adherent and to stick to my opinion. A delicate task that might sound problematic to the contemporary artist, but overall I have enriched myself professionally and personally.

What tendencies did you notice at the last edition of the Prague Quadrenial, where you participated with the Bulgarian pavilion? What did you present, and why?

I was not there. I presented the design of Valentine’s Day (Ivan Viripaev (Small City Theatre “Off the Channel,” 2008): a tiny, little inflatable décor, which I love very much because of its adequacy to the general idea of the play and its separate beauty.

Have you ever directed?

Not in the literal meaning, but I have been able to set the rules on stage; the rest have, of course, been done by the director.

What set designs have impressed you?

I have always liked Anna Viebrock’s work, a painter who often works with the Swiss-born director Christoph Marthaler.

What are you afraid of, and what troubles you in your job?

A million things. I am one of those people who “go through” the days after the premiere as I were giving birth to a newborn.

Are you a poet?

No, I create comic books. 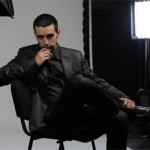 [1] Emil Iliev is a writer and critic based in Sofia, Bulgaria. He has a bachelor’s degree in theatre studies and management at the National Academy for Theatre and Film Arts in Sofia. He is the international relations coordinator for the National Theatre “Ivan Vazov” Sofia.