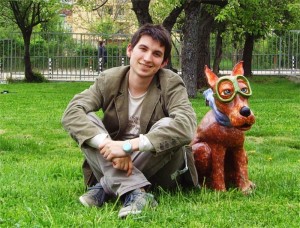 In 2012, when the whole world is commemorating one hundred years since the death of August Strindberg, the focus has been mostly on him and his creative work. While everywhere there are conferences reflecting his works, exhibitions displaying paintings and the entire imaginative body of work that he left as a legacy, in his native Stockholm, in the Intima theatre he created a century ago, one of his most emblematic dramas, Miss Julie is appearing again.

The twentieth edition of the International Theatre Festival Varna Summer in Bulgaria gave its full attention and highest expectations to this Miss Julie, because the production was coming south from its original source. I am referring to the Intima Theatre and Anna Pettersson, who is an undeniable star with the Royal Dramatic Theatre in Sweden and the Stockholm City Theatre, and this somehow inevitably leads to a high standard in every respect—from the choice of play through to its reading to the performance, which became rather controversial in the framework of what the regular Bulgarian festival audiences expect to see. Pettersson’s performance set a new interpretation of the given text of Strindberg, who after more than a century now is nowhere near leaving the stage in Europe or overseas.

Pettersson’s Miss Julie makes me think of the stereo images (stereograms) that were so popular years ago. When viewed from a certain angle, those images acquire three dimensions. In this production all characters merge—not only those of Julie, Jean and Christine, but also that of Anna Pettersson herself, who comments on the other roles, and so it passes during the whole play. And it is as if that passing turns out to be insufficient for the experienced viewers’ eye. But in fact, how actually should and could a naturalistic drama be performed in the second decade of the twenty-first century?

The show was created as a result of a research project of the Stockholm Academy of Dramatic Arts. Anna Pettersson herself interviewed and met with many authors in the fields of cinema and theatre, searching for an approach to diversify the story, to set in motion the image using the actor-body to realize the interpretation. This went so far as the decision to deconstruct the text. The performance is made in a way that, keeping with the main constructs of the author, the director and the actors who were performing (in this case the same person) could calmly discuss and elaborate footnotes.

We can see the Brechtian alienation technique in Pettersson: first, in the denial of one personality and in the turning into another character, and second, in the constant crossing of the fourth wall, to its complete depersonalization, i.e. after bouncing from role to role she is no longer Jean or Julie or even Anna Pettersson but something other. And so on, until we reach the inclusion of the audience, by which inclusion Pettersson categorically refuses to have her show seen as a one woman show. Ultimately, maybe if we imagined the actress as a three-headed dragon, it would be easier for the viewer to consume and digest this production of the play. But this quasi-Scandinavian dragon is hardly the way the mass audience sees the play; instead, they keep expecting the three actors and the untampered with, original Strindbergian conflict, and its outcomes…

The clichés that have piled up in every great drama’s baggage over the years are hard to overcome, and each new reading launches us into acts of comparison. Therefore, we can with conviction announce that Anna Pettersson has made a step forward with the deconstruction of received attitudes. So, in fact, we have a double deconstruction, and thus a re-interpretation of the main fragments of Miss Julie. Switching from Jean to Christine, from Christine to director, who turns her from that point on into actress, who plays her role commenting on the actions and decision of the characters is just one possible attempt to break up the clichés.

There are things which I would categorically define as real hits in her work. These are the author’s own remarks, which Pettersson dares to put forward and which de facto break up Strindberg’s. For the first time we have the discussion about the razor blade between Jean and Julie, which at the end of the drama gets too metaphorical, becomes a “manual of suicide” when described as in a textbook. The questions that Anna Pettersson asks are not of lesser interest: “Why is Miss Julie the one to take her life? Why not Jean? Why is it always the women who commit suicide in world drama?” From Antigone through Ophelia to Julie and Hedda Gabler, and so on. But as Petterson says: “Who cares about the fault?—it is again I who have to bear it.”

Despite the brilliant performance of Pettersson, there still remains a hint of something that has not happened. At least the Varna premiere made me vividly aware of this. It was like a rehearsal during which the obligatory lighting and improvised mise-en-scene are just details. The presence of the camera and its live operator on the stage were also much-discussed. Most of Max Marklund’s digital effects stay at the edges, rarely serving to carry artisticexpression over to another form: they remain a complement, although there is something nice in this voyeurism.

There is risk involved, especially when trying to play three characters, each with his/her clear background, directing oneself and meanwhile alienating yourself from that role of yours. And yes, there is no clear definition of either the boots or the razor, which give the performance such a successful start. Yes, the genre is modified and it is neither a theatre performance, nor a performance-lecture, nor a film screening—but so what? Or today, is the diffusion of stage genres compulsory? Now the boundaries between the arts have long been fuzzy. Are there laws about how to interpret a given text? I do not think so. Petterson has made her attempt and as Strindberg says: “If it fails, there is time to do it again.” 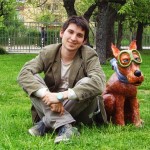 [1] Mihail Baykov is a theatrologist and theatre critic. The author is a theatre specialist interested in theatre criticism, history and theory, as well as in theatrical production, management and marketing. In 2010, he graduated in Art Studies from the New Bulgarian University, where he also studied acting. He graduated from the National Academy for Theatre and Film Arts (Bulgaria) with a BA degree in Theatre Studies and Theatre Management (2011) and an MA in the Art of the Theatre (2012).

Beyond the Clichés of Miss Julie