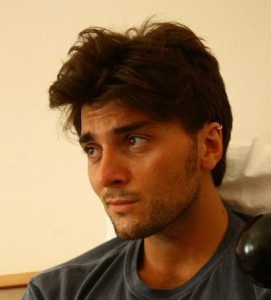 L’effet de Serge by Philippe Quesne, September 4, 2012 at Teatro India, Rome. In the frame of the Short Theatre 7 (Festival).

The performing arts are one of the most changeable and yet most durable means of expression. Their languages, styles, forms, content and function set the tone for the times. Certainly placing a well-defined performance in a geographical constellation secures its meaning and power; likewise, a well-defined historical moment is able to assign a specific political and social weight to a performance. Nevertheless, even the forms of theatre at the farthest extremes can be reunited by one constant, which keeps the performing arts in live contact with reality in a way different from any other art form: the audience. With his presence, a spectator enforces the essential spontaneity and unreplicatability embodied by a theatrical act. Through the direct and physical nature of this contact, the performing arts can be seen as bright pieces of cultural evidence. Each time at a different pace and with different critical relevance, in the live relationship between the performer and the spectator takes place that true social and political spirit which every art should pursue.

A very common mistake is to look at the sharp separation between stage and seats as a symbol of tradition, and at the fall of the fourth wall as a signal of an avant-gardist and revolutionary conception of theatre. To tell the truth, the idea of a theatre which relegates the spectator to a role of distant observer was only typical of one particular period, the Nineteen Century. But suffice it to look backwards to note how frequent the exact opposite was typical: a theatre in which the spectator was in fact in the limelight. Nowadays, numerous theatrical projects are in search of a renewed relationship with the audience. Some of them not only pull down the fourth wall, but even choose to carry the performance into the seats. Or, as is the case with the two works discussed in this article, they take the opposite road, inviting the spectators onto the stage, to be part of the performance. In two very different ways, French artist Philippe Quesne’s L’effet de Serge and American Richard Maxwell’s Ads show how the invitation mode can make the spectator’s role a poetic or political tool and challenge the conventional way to attend a performance.

In 2003, Philippe Quesne gives birth to Vivarium Studio, a “laboratory for theatre innovation,” open to a wide range of arts and artists. In the frame of the Short Theatre Festival at the Teatro India in Rome, a living room is recreated on stage: on the left, a main door, and on the back wall, a French window overlooking a courtyard. From outside, the actor Gaëtan Vourc’h peeps out, enveloped in thick fog and dressed in an astronaut suit, which—as he explains into a microphone—is the one he wore in Quesne’s previous spectacle, Big Bang (2010). Thus, one performance is linked to the other without any given logical motivation, setting the tone for the ironic and nonsensical spirit of this excellent work.

Inside the white walls, there are a purple carpet and a ping pong table used as a writing desk/dining table/working space, and the room is full of the most varied objects: mysterious electrical circuits, radio-controlled cars, fancy dresses and repair tools. This is Serge’s house, where every Sunday he welcomes a bunch of strangers to offer them—with disarming tenderness—a small and ephemeral demonstration of special effects. From the dark of the courtyard, different characters come and go; one rides a bicycle, one drives a car, one carries a backpack, another brings a present in a shopping bag. All of them are local walk-ons, gathered through an open call from the festival and who have prepared their entrance with a rehearsal led by Quesne the day before the debut. The key outline is the repetition of a pattern: the guest arrives, says hello from behind the window, is invited to use the front door and to leave his or her coat, is offered a drink (wine, water or juice), a place to take a seat and to enjoy a thirty-second show. The show is about small, basic tricks, with the nostalgic flavor of some childhood memories.

Quesne performs a double transformation of the concept of spectatorship: he turns the spectator into an actor and then again into a spectator, he makes a poetic tool out of him, distorting the usual balance of the roles. And this new kind of contact is granted on one fundamental condition: transience. The walk-ons don’t stay on: they see the show, they thank him, they say goodbye and are gone, coming back once, in the ending, for an all-group party in front of a final, clumsily pyrotechnical grand finale.

The timing and the pacing make the difference in this beautifully simple performance. In the pauses between visits, Serge rehearses his small magic tricks, orders a pizza and leaves it there to get cold, is entranced by a toy helicopter unable to sustain altitude. In these simple gestures and in the predisposition for many little failures, what is visible is the poetics of the clown, someone who gives himself completely to an action bound to quickly die out.

With the same pace, different (but perhaps selected) human types meet each other, then disappear: a girl, a young couple, a lonely woman, a man riding a bicycle with an empty child seat, the pizza delivery guy and a latecomer who misses the grand finale. Inviting the spectators on stage, Quesne turns them into a tool for truth, revealing a new dimension: performance as a space open to something intimate and delicate as a caress, a smile, a fit of embarrassment. Since we know that the walk-ons are hybrid creatures—that is, halfway between actors and spectators—their interaction with the performer touches us deeply.

It is impossible to separate Richard Maxwell’s Ads from the context it is set in, the small town of Santarcangelo, in Italy. The U.S. artist, a member of the New York City Players group, has brought to the 42nd edition of the Santarcangelo dei Teatri festival a performance focused on interaction with the spectator. Beyond the simple breaking down of the fourth wall, Maxwell’s site-specific project founds the dramaturgical, spatial and visual construct on the personal experiences of the performers, a group of local citizens. Not actors in ordinary dress, not a text “based on” interviews or a news item, but bodies and voices of the community which act right on stage, citizens bodily present to deliver the results of a workshop. In the form of holographic projections, one by one the “actors” step into a pulpit and reply to the same question: “What do you believe in?” The people are as varied as their answers. They present a wide range of peculiarities, which covers the past, the present and the future of their unconventional community. There is in the performers a strong sense of belonging to their community, which has for 42 years hosted this lively and close-to-the-people festival.

Local history and personal experience play leading roles in this work which, contrary to how it appears at first glance, needs a careful audience involved for a well-defined lapse of time, a model far from art installations, where you can stop by and pass on. Here, the audience takes the time to watch and listen closely: someone recognizes a friend, a relative, a local character. Such a peculiar handling of collective experiences makes a step forward in the analysis of the role of the spectator, a research field explored also by other past projects of this festival which, through a long history, have sharpened the identity of Santarcangelo as a place for theatre. Such a rare and powerful aesthetic impulse defies any historicization.

Maxwell has been working for a long time on the sharp realism that lives in every story told, and he has made every effort to “create people, not roles,” as journalist Robin Pogrebin pointed out (New York Times, 25 September, 2000). Maxwell’s work begins with this goal, and it ends by creating from scratch a new, third level of reality as regards the stage and the seats. The people he “creates” are far from any actor/character or performer/spectator. Trapped by the vivid illusion of three-dimensional holographic imagery, these ghostly figures inhabit a space-time paradox: “faraway, so close,” as Wim Wenders would have said.

The question posed to the holograms is on a weightier contemporary topic–“What do we believe in?”—as well as the positioning and the actions of Quesne’s walk-ons deconstruct and reconstruct a new kind of relationship. On the one hand, we are measuring our actual distance from the walk-ons, questioning our active responsibility towards the performance; on the other hand, we are wondering whether we believe in the answers we are hearing.

In both Quesne’s and Maxwell’s works, the mixture of images, fiction, simulated actions and memories creates a special relationship which deeply challenges our role as spectators. It is an absolutely private kind of participation which draws a triangle between three vertices: performer-spectator-concept. The exact flaming core of the theatre. 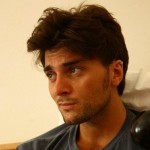 [1] Sergio Lo Gatto has a degree in Theatre and Performing Arts from Rome University “La Sapienza,” where he now co-leads a permanent workshop on theatre criticism. Member of the Italian Journalist Guild, he is a freelance writer and theatre critic for printed and online publications such as Teatro e Critica, Hystrio, Tanz and Plays International; and a founding member of the Italian Association “New Criticism” and of the international independent theatre critics observatory The WritingShop. www.teatroecritica.net.

Between Holograms and Special Effects, Richard Maxwell and Philippe Quesne Challenge the Audience