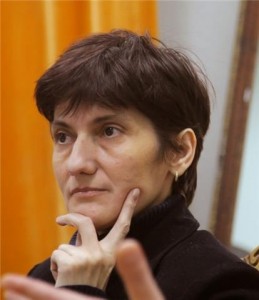 After Uncle Vanya by A.P. Chekhov and Cries and Whispers by Ingmar Bergman, awarded by critics and applauded by audiences, Andrei Şerban strikes again with the Hungarian State Theatre from Cluj Napoca, Romania. It was an unexpected choice, Hedda Gabler, a play rarely put on stage in Romania, not even once in the last two decades. This was good, first as a means of marketing it to the public, but also for the artistic mission of the state-funded company. At the moment it is one of the most valued in Romania, with strong, talented ensemble of actors.

As usual with the choices Andrei Şerban makes, the semantic richness of Ibsen’s play counted as well, the fact that like any classic it is open to new interpretations. Actually, reinterpreting old theatre-plays in new contemporary ways has been Şerban’s directing strategy lately in Romania. At the National Theatre in Sibiu, he worked on The Seagull in 2007, using the entire dramatic context as a pretext to create a scenic meditation together with actors and spectators of the continuous renewing operation of the theatre and of the permanent changes that people had to deal with. This pattern was creatively applied again in Uncle Vanya in 2009 at the Hungarian State Theatre, where every single character was reinvented and the space of the theatre hall used in a very original manner. The public was seated on the stage, while the actors used even the audience area as a new stage. Also in Three Sisters (National Theatre Budapest Hungary, 2011), Şerban imagined a modern performance, aesthetically transforming Chekhov’s play into a grotesque tragicomedy with sad and yet happy clowns dreaming of Moscow.

For Hedda Gabler he did almost the same, becoming, together with Ibsen, a co-author of the performance. Except for the fact that in Şerban’s view General Gabler is incarnated by a voice, nothing else is changed from the original play. Well, there is a new translation, in fact an adaptation made by Şerban and Dana Dima, but everything Ibsen wrote a hundred years ago has been kept, even the smallest set design details. Şerban reshapes Hedda Gabler bringing her to our time, for better perception. His vision is unexpected, fresh, captivating, and during the two hours and twenty minutes of the show – can you believe it? – we laugh. With bitterness, of course, which is the present recommended way of dealing with things we cannot handle.

How does Andrei Şerban do this? First, by redesigning the characters. As we know, Ibsen imagined Hedda, Tesman, Eilert, Thea, Brack and the others in a complicated affective and social network, almost impossible to solve, because of their past, because of their incapability to face the present, with personal ambitions and lack of pure ideals and lack of pure love. Small lies, hidden hopes, no balance in feelings all make Hedda’s world an ugly one, even though appearances say the opposite.

In this theatrical landscape, the director works directly on the characters, giving them new interesting shapes. Here, at this point, he abandons Ibsen, not by betraying him, but by adding new significations according to our zeitgeist. And trust me, this is a strong feature for the show! Let’s be honest, except scholars, nobody today has the patience to watch four hours of old stories about a beautiful woman surrounded by men who all want something from her!

A few days before the opening night, Andrei Şerban published in the press a letter to none other than Henrik Ibsen. This is a bit unusual for Romanian cultural habits, but among other things he highlighted the importance of the stage director for the actors’ achievements. He used a comparison to football, saying that the stage director is very similar to a coach of a team of individual football players. He was perfectly right and his approach to Hedda Gabler focuses first of all on his renewed ideas, but also on the actors’ training. Following this concept you will discover metamorphosis made by Şerban, and the result of this is that every character gets a new portrait. Everybody and everything revolves around

Hedda (Kezdi Imola) who is beautiful, and always has been, but distant, dominating, bullying her ex-schoolmate Thea. Hedda is the town’s darling, popular but unhappy. Often, I had the feeling of an American story, with a blond, pretty woman – Hedda gets a Marilyn Monroe vinyl as a gift, but this is more than a courtesy gesture, it´s a sign, a theatrical quote – whose tragic end means taking her own life. Not because of despairs, but because of dignity and pride; she does it dressed in her father’s uniform!

The soundtrack used in the family room is also American, hits from the interwar years. After a tumultuous youth, Hedda has now settled down with Tesman. But the reminiscences of her past are too strong, so men from her biography are soon coming out. Like Eilert Lovborg, the challenging intellectual competitor of her recent husband, and judge Brack, still interested in Hedda’s charm and willing to take his chance at every opportunity.

George Tesman, played by Bogdan Zsolt  personifies an infant, a misfit persona in the grown-up world. Childish, unable to compete, he is like a rabbit, taking small, quick paces, hops and acting like a kid in a dependent relationship to his wife and aunts. Zsolt’s performance is remarkable, versatile. He controlls his scene posture, voice, mimic, he creates an agitated, powerless, clumsy character. The same kind of outstanding performance is given by Hathazi Andras in the role of Judge Brack. A real gentleman, gallant, shifty, he is sending messages not only through words but also through body language, astonishing changes in his facial mask from happy to sad, which once again proves his accurate chameleonic power.

Eilert Lovborg is given life by a young actor, Szücs Ervin. The difference between Tesman and Eilert is outlined from the very beginning: Eilert is athletic, tall, with a strong masculine voice, making Tesman look ridiculous in comparison. A thin manuscript, only a few pages, kept by Tesman in a huge suitcase reveals how limited his scholarly capacity really is. This play speaks about power, the cobweb of which is accurately revealed by Şerban in this spectacular construction in which important themes of the play are emphasized (the spiritual creation’s similarity to procreation, the idea that behind every strong man is an even stronger woman, seduction as weapon etc.).

Everything is complicated in this human relationships network, where not the normal type, the duet, is used, but instead everything goes in three, meaning immixing, conflicts, repositioning. Even though they are not as popular actors as Zsolt and Hathazi, nevertheless, Szücs Ervin (Eilert Lovborg) and Eniko Gyorgyakab (Mrs. Elvsted) manage to stand out and give a great performance, even though Szücs exaggerates a bit in the second half.

Aunt Julia is a tonic and an optimist, and Şerban’s idea to cast the same actress (Varga Csilla) also in the role of Diana the tramp, was brilliant. On one hand, it’s a source of humor; on the other, it gives the actress an opportunity to switch roles quickly, without any obvious effort. Varga Csilla is at times an over maternal aunt (photo 4), overwhelming her nephew with affection, and at times a cheap woman with no principles. Tall, with a well prominent shape, versatile, Csilla Varga attracts the audience’s attention, at some moments much more than Hedda does.

Carmencita Brojboiu’s set design follows Ibsen’s didascalies, offering the perfect ambience for the show, in a realistic yet suggestive way. Like, for instance, the transparent walls through which everyone peaks, which suggesting voyeurism and attacks to privacy.

This Hedda Gabler is a new file in Şerban’s latest project to rediscover classics in his unique way. In order to understand them, at least that´s what he says, he chooses a play and reinterprets it as they go along, he with the cast but also with the audience. The outcome of Serban’s vision is that theatre is always a way for a better understanding of our world. 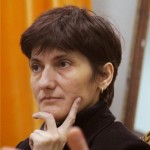