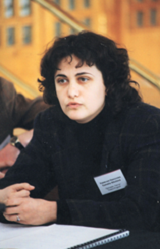 Theatre laboratory Sfumato is one of the most interesting experimental companies in the last twenty years in Bulgaria. Interesting  – and successful: its January premiere, The Winter’s Tale directed by Margarita Mladenova has received several national theatre awards and was selected to the main programme of both the International Theatre Festival Varna Summer 2011 and the International Theatre Festival Ex Pronto in Ljubljana, Slovenia.

We won’t be mistaken, if we take for granted that Shakespeare’s The Winter’s Tale in Margarita Mladenova’s reading in Sfumato is a spectacle about the damages of jealousy and in general about the dark abyss of human passions and their catastrophic nature, when they are left without control. The performance and the play of Shakespeare contain this interpretation as well. But above all Margarita Mladenova’s performance is a spectacle about the ice-cold white “landscapes” where the life of man turns when he loses his love, when he loses his striving to understand and to be understood, when the inner emptiness and lack of meaning start emptying the world of recent commitments, values and projects, “killing” them one after another. After love – which in Shakespeare’s plays is simultaneously a personal feeling charged with dramatic tension, and a basic, founding metaphor for the desire to live with the other/others – the world is dying, and the person is moving into its unreal, ghostly double. The winter tale of his life is falling over.

Margarita Mladenova and the performance team don’t retell and don’t interpret Shakespeare’s play. She has no need of this. In the centuries, the text of the Renaissance author condensed in its title, has turned into a byword for life after love. The play is rather laid on the stage. Once it is spoken and the second time it is shown through spatial images. The performance spreads out before the spectators in parallel and crossing verbal and visual landscapes, drawing one and the same repetitive pain – the pain of meaninglessness and loneliness.

Daniela Oleg Lyahova’s decision of set and costumes is very appropriate, materializing the ice breath of Shakespeare’s winter’s tale through empty white stage (universe), where at the back there stands a wall of white cubes which look like ice blocks. Like a door to a tomb, this wall periodically opens and forms from itself transient places for living (stairs to somewhere, a space in front of the home where lovers meet, sea wharf where to arrive and to sail from) to close in an instant and to swallow them again, restoring its imperturbable ice irreproachability and eternity.

Hermiona’s (Elena Dimitrova) sentence to death in the beginning and her magical return in the end of the play is like a frame of the repetitive ritual of appearing and disappearing, of life and death.  It is shown in one and same way – the actress sitting unreal white and distant over an ice slab that emerges for a short time from the ice wall and returns into it like a drawer in a morgue. The difference between the two scenes is tiny, but essential. At the condemnation, a moment before death, Hermiona’s face, which is the only part of her revealed by the white robes, is alive and full of blood, cut by movements and grimaces. At her return, her face does not differ from her white winter clothes which have wrapped her up – which have frozen her – from head to heels.

The costumes repeat the futuristic logic of the set. Dressed in their white winter mantles the human bodies are also turned into white ice blocks which are grouped in straining with their sharp, outlines mise-en-scenes. Sometimes the mantles are taken off or opened, and then from the inside the oval and vulnerable curves of the bodies appear for a while. In fact the persons-ice pieces were formerly living and suffering individuals, suddenly frozen by the breath of life winter that had rushed on them. An exception from the endless winter picture are the summer costumes and mise-en-scenes of the lovers. Perdita (Elena Dimitrova again) and Florisel (Yavor Baharov) are dressed in light white clothes, bending around their bodies, energetic, full of love – and desire for life and understanding with the other/others. Only these summer characters in their summer costumes may touch and hold each other. The rest are denied of this opportunity – they are always at some distance from each other, divided by the sizes of their ice garments.

In such postdramatic spectacle that aims at an immediacy of experience for actors and spectators in the real running time of a famous literary text, the actors’ task is simultaneously easy and very difficult. When they go on stage and enter into the visual-spatial forms of the images and situations, through which Shakespeare’s play is set there by the director and the designer, the performers should go through their experience, sensation and emotions awakened by these forms. The expression of their unlocked experience and energies should be additionally theatralized, i.e. emphasized and intensively manifested in order to reverberate throughout the hall and to start a similar experience process in the audience. But the participants in the performance have entirely given in to the overwhelming frozen sorrow of the strong visual solution. Therefore the way they share and experience this sorrow is also frozen, muted, slow and prolonged. If in such a performance we miss to some extent the impossible-to-suppress outburst of inner feelings, “the blast” (after Sarah Kane) of the erupted suffering, this lack is undoubtedly compensated by the skilful and precise intonation and plasticity outlined by Yavor Baharov, Elena Dimitrova, Margita Gosheva, Sava Dragunchev, Tsvetan Aleksiev, Hristo Petkov.

In the show’s programme leaflet the director Margarita Mladenova says that she turned to “the genius’s last miracle” The Winter’s Tale because of the faith sneaking in it that the repentance and the miracle of forgiveness had been “the only one and last chance to cut off the spiral of evil…and for the man to raise again”. The spectacle’s finale leaves everybody from the present – actors and spectators – to decide on his/her own whether the ice-cold landscapes after love might become alive again in the colors of summer. 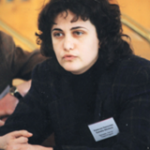 [1] Kamelia Nikolova (b. 1959) is a research fellow at the Theatre Department at the Institute of Art Studies, Bulgarian Academy of Sciences, Head of the Department “Theatre Studies” and professor of History of European Theatre at the Bulgarian National Academy of Theatre and Film Arts, Sofia and visiting lecturer at other universities.
The list of her books includes The Other Name of Modern Theatre. Drama Director(1995); Scars of Nothingness (Theatre Essays, 1998), Expressionist Theatre and the Body Language(2000), Modern European Drama staged in the Bulgarian National Theatre(2004), The Theatre on the Border of 20th and 21st Century(2007), British Drama 1945-1989 (2009), History of Bulgarian Theatre, vol.IV (2011, in a research team). She has also numerous publications in the national and international specialized issues.
Kamelia Nikolova is a member of the editorial board of “Homo Ludens” theatre magazine, deputy editor in chef of “Art Studies Quarterly” and she has a specialized weekly page for theatre criticism in “Litarary newspaper”, Sofia.