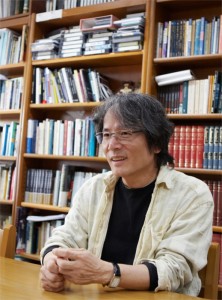 The theme of the international program at the 2011 Edinburgh Festival was “Asia”; this is why I couldn’tnot go to that Scottish city. Due to my administrative responsibilities as Dean at the Korea National School of Drama, however, my trip to this beautiful city was limited to three days, from August 20th to the 22nd. It was crazy to take a twenty-four hour flight to participate in the event for only three days, wasn’t it? Crazy, yes, but it was truly a worthy folly, you must believe me. For the main program of the festival, many performances in theatre, dance, and music had been invited from China, Japan, India, Indonesia, Vietnam, and Korea. The festival director, Jonathan Mills, was a very ambitious and committed curator, with a broad and deep interest in Asian culture and arts. I knew this as soon as I met him in his beautiful office at the festival headquarters to discuss mutual cooperation between the Festival and IATC. I was assured that he would continue to be a willing vehicle for bringing Asia and Europe closer and closer.

There were three shows invited from Korea: The Tempest, adapted and directed by Oh Tae-Suk; Princess Bari, choreographed by Ahn Eun-Mi; and Vivaldi’s The Four Seasons, performed by the Seoul Metropolitan Orchestra, conducted by the much-honored Maestro Jung Myung-Hoon. I saw none of these due to my aforementioned overly- brief visit. I saw only two Asian plays and one multi-national production, along with three Fringe pieces from Great Britain. Altogether, these were really the tip-of-the- tip-of-the-iceberg. So my review here should be viewed as nothing more than the blind man’s touch on an elephant’s leg.

On my first night, at the Festival Theatre I saw The Revenge of Prince Zidan, a Chinese version of Hamlet performed by the Shanghai Peking Opera Troupe, written after Shakespeare by Feng Gang. Directed by Shi Yu-kun, Prince Zidan employed masterful martial arts, striking singing and dancing, gorgeously embroidered costumes and a live percussion ensemble. The local spectators found this exotic show very appealing and gave it a big ovation.

These Chinese artists were pleased not to have tampered with Shakespeare’s plot at all. They had only changed into Chinese the names of the characters, the locations and times for the action of the drama. It was the style of the play that had changed, not the substance: most of the lines remained intact, and there was no obvious deviation from the Bard’s narrative line. Because of that, perhaps, the audience enthusiastically received the performance. One elderly lady with a Scottish accent even told her companions that Shakespeare would have been thrilled if he had seen this production. Contrary to her response, however, I was quite disappointed with the show because it lacked any Chinese perspective in the interpretation. There was no inter-culturality in this inter-cultural performance. Those British critics that I met in Edinburgh were generally of a similar opinion. Critics’ expectations tend to be different from those of the general public. Here I was forcefully reminded of my own agonizing question: “For whom does the festival toll? For the local audience, or an international critic?”

On the second night, I saw One Thousand and One Nights at the Royal Lyceum Theatre. British director Tim Supple had dramatized and directed the play for multi-national performers from Egypt, Tunisia, Lebanon, Syria, Algeria, Morocco, Paris and London. This theatre-within-a-theatre-within-a-theatre was so well orchestrated by Tim Supple that I enjoyed every second of the whole six-hour show. The play was full of poetry and also political implications—still very relevant in this time of Jasmine Revolutions—regarding the tyranny of the abuse of women and civilian rights. It is my empirical wisdom that when a show is good, the longer the better. When the show was over, I wished it had been even longer. I hadn’t known to expect from the Arab players this naturalistic, sensual, skillful and physical performance. Hussein Baydoun’s design was simple and powerful, too.

The last international program I saw was Murakami Haruki’s TheWind-Up Bird Chronicle at the King’s Theatre, adapted by Stephen Earnhart and Greg Pierce from America, and directed by Stephen Earnhart with English-speaking Japanese performers. The dramatic action follows the journey of Toru Okadara into his own uncomfortable violence and sexuality while searching for his lost cat and his wife who has mysteriously vanished. I was not particularly enthusiastic about this intercultural piece. It was an odd marriage of an American detective story structure and a Japanese aesthetic style. It was too American to be Japanese, and too Japanese to be American. But the spectators were very warm and sympathetic to the play. And again I was struck by another question: “Whom should the intercultural theatre entertain? The local audience, or an international critic?”

From the Fringe programs, I saw three British shows, including two monodramas, Tuesdays at Tescos at Main Hall and Shylock at the Rainy Hall in Assembly Hall, and then Oedipus at the Pleasance Grand in Pleasance Courtyard. Tuesdays at Tescos was “the British premier and first UK adaptation of the French sensation,” Emmanuel Darley’s Le Mardi à Monoprix, adapted by Sarah Vermande and Matthew Hurt, directed by Simon Stokes. Simon Callow, who starred as Pauline, a transvestite daughter who could never get his conservative father’s love until his death, was very effective in demonstrating his femininity, but did not go very much beyond it to create a loving and confused son who desperately seeks his old, dying father’s recognition of his female identity. I could not feel strong empathy for his agony.

Steven Berkoff directed his own text based on Sophocles’ Oedipus, with several approaches to contemporizing this classic: his language is very modern and harsh; the chorus is comprised of modern–day laborers who make and unmake many tableaus in front of, in back of, above and under the suffering Oedipus at key landmarks on his journey to self-awareness. Despite these attempts to contemporize, I could not detect any particularly new interpretation that made it relevant to our times.

Shylock, written and directed by Gareth Armstrong and performed by Guy Masterson, was quite a pleasure although its message was very painful, since it dealt with anti-semitism from biblical times until after World War II, using the character of Shylock as a way to do so. Guy Masterson was particularly skillful in demonstrating the ways that the great English actors, including Edmund Kean and Henry Irving, have performed this character since the 17th century. It was indeed interesting to see how the interpretations of this character have changed according to their socio-political times. Guy Masterson achieved a very intimate and friendly relationship with the audience, and did so with such ease that his educational, artistic, and entertaining performance made for good popular theatre.

My three-day participation was certainly not enough to review this festival properly; it is possibly the biggest international festival in the world. However, even from my short visit there was still a very obvious fact worth noting: theatre tourism is a reality, not just a possibility in Edinburgh. The whole city seemed to be filled with crowds of tourists who had come to this remote city in Scotland with the main purpose of seeing theatre performances. I don’t think Edinburgh has many more tourist sites than the average European city, so the fact that every street and theatre space was full of people says that their chief motivation for being there was theatrical. Many of the shows were played on makeshift stages in non-theatre buildings and still enjoyed capacity audiences in most cases.

As a critic, I like to worry, and one of my greatest worries is about the future of the theatre. When I was in Russia in 2003, for instance, “the death of the theatre” was already under discussion. Everyone says that theatre is in a real crisis. But with this many enthusiastic audiences, how can you not forget that worry for a moment and join the happy crowds celebrating the health of the theatre and the wonderful spirit of the festival. I still have the vivid feeling that I have been to theatre paradise. 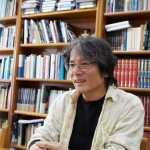 [1] Yun-Cheol Kim is President of IATC; recipient of the Cultural Order of Korea; Dean and professor in the School of Drama, Korean National University of Arts; and editor of The Korean Theatre Journal, a quarterly. Two-time winner of the “Critic of the Year Award,” he has published nine books so far, two of which are anthologies of theatre reviews.