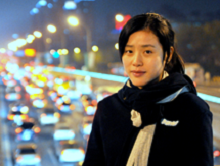 Shakespeare performances are beginning to resemble gymnastic competitions. Stage maestros seek to exhibit their creativity through their own adaptations in the same way that gymnasts perform free exercises. Heiner Mueller, however, turns this kind of theatrical gymnastics into an intellectual riddle by using Shakespeare’s plays as a weapon of criticism. As a result, Hamletmachine gains so much depth that it is not just another adaptation. It is instead an essay full of references, or a thought provoking pamphlet in the guise of five monologues.

On 15th September 2010, what I would call The Battle of Hamletmachine took place in The Bee Hive Theatre in Beijing.

The Beijing production is quite amateur: it cost only twenty thousand yuan, used a bare stage and a crew of university students. Four actors playing martial roles are students from the National Academy of Chinese Theatre Arts（中国戏曲学院）.The whole performance was only 45 minutes in duration. Fifteen minutes of the performance are devoted to video clips. On a backstage screen, we watch archival records of political events, including the funeral of the former North Korean leader Kim Il-sung, which are intended to give a sense of the absurdity of a personality cult. There is also a juxtaposition of images from the German documentary Triumph of the Will and the Chinese Culture Revolution. Later, a toy tank appears on stage and drives towards an actor lying on the ground. This makes a mockery of a well-known historic event, in an attempt to entertain the audience in an innocuous way. However, this image also succeeded in enraging some members of the audience. The performance ended with Ophelia throwing herself to the floor with a stunning style of jump originating from Peking Opera. The performance is like a pantomime of Peking opera, accompanied by a voice-over of the original text.

During the post-performance Q&A, the young director Wang Chong was eager to wrap up, but the audiences would not let him go. One university student in the audience, who traveled very far to see the performance, expressed his disappointment in public. Wang replied, “If you wanted to watch a vulgar song and dance piece, you should not have come in the first place.” This led to a microphone grabbing jostle, threatening to turn the theatre into a battlefield. Some audience members openly expressed delight at the mayhem this post-performance session provoked.

Among the angry group are non-political theatergoers who are confused about the message the play delivers, as well as intellectuals, be they leftists or neo-cons, who harbored great expectations for the Chinese premiere of the Heiner Mueller play. To their frustration, many misunderstandings and false interpretations transpired on the stage. During the discussion, it was difficult to distinguish between clapping signaling approbation or displeasure, since Chinese audiences also clap their hands to interrupt someone’s speech.

Why is the play so attractive to the audience? What does Hamletmachine mean? The quick and easy answer may come from Pink Floyd’s music video for The Wall, which has been so influential to many Chinese of 1970s‘and 1980s‘ generations. Many of them see the video as a symbol of the cold war: “Government is a machine that manipulates people by brainwashing them with communist ideology.” Mueller certainly did not agree. As a successor of Brecht, he was deeply concerned with the “ruin of Europe” and was unhappy with the younger generation who, like contemporary Hamlets, considered thought as a wound of the mind. “Goodbye Lenin!”[2] How to speak to those Hamlets? In his play, Mueller raises some questions. Imagine that you experienced a trauma that resulted in a concussion. Would it be possible for you to recall the past? Is it still necessary to seek revenge for injustice? “To be or not to be” is still there, but Mueller’s Hamlet renounced his revenge.

”I want to be a machine. Arms to grasp, legs to walk, no pain no thoughts.”

For a director of the 1980s generation like Wang Chong, this line of monologue is the key. Hamlet rips a photo of the author during the play; it was interesting to see Wang himself playing the role of Hamlet that night. During the Q&A, I pointed out the absence of interpretations of Heiner Mueller. Wang replied by quoting Roland Barthes, announcing the death of author. He emphasized that Hamletmachine is a postmodernist work.

In China, whenever the audience complains that they can barely understand a work, avant-garde artists will deploy certain western academic terms in reply, terms like postmodern. This works like placebo, saving them from anxiety of ignorance. It is quite clear that what intrigues a Chinese audience is a performance that refers to a post-communist Chinese society. Reflection on the Hungarian uprising of 1956 impelled Mueller to write Hamletmachine. Ophelia represents the oppressed third world. Hamlet is a disillusioned cross-dressing individualist who renounces revenge, yet helps rape his mother. He gives up his role and axes Marx, Lenin and Mao to say farewell to the revolution. Just like Peter Weiss’sMarat/Sade, Mueller criticizes “the clinch of revolution and counter-revolution as the fundamental figure”[3], and calls for a continuing revolution as an unfulfilled mission.

Spending his whole life in a conflicted world of political reality and contemporary history, Mueller was never a follower of artistic fashions like postmodernism. On 4th October 1989, during the final week of rehearsals for the Deutsches Theater’s production of Hamletmachine, which Mueller directed, he gave a brief address at a rally which marked the revolution against the one-party state in the German Democratic Republic. The crowds he spoke to are all Hamlets in his play. On many occasions he mentioned that he wants to kill Hamlet in a symbolic way. Rather than haranguing the crowd to rise up against the dictatorship, he read an appeal from a group of independent trade unions. After he was done, the crowd of five hundred thousand booed lustily, dismissing as Communist propaganda any such talk of class struggle. Five years of ruthless neoliberalism and twenty percent unemployment would soon show that Mueller and the trade union activists were on the mark after all.[4] Through the veil of time, I share the frustration he expressed at that particular moment: he somehow foresaw what would happen to China during the last two decades.

In China, drama no longer addresses harsh reality. Artistically speaking, this adaptation ofHamletmachine is very Chinese: it uses Peking opera and controversial political events for commercial appeal. Wang Chong spins his audience with a shameless cynicism towards the capitalistic system, taking it as a machine manipulating people by brainwashing them with consumerist ideology. In both his writings and speeches, Mueller emerges as a hard-core socialist thinker who welcomed disagreements, who pushes his readers to the edge of a political dilemma. Most of the time, it takes great courage to play this game of Truth or Dare. It can be a lethal crash in the theatre, an agitated turmoil. But why should artists be afraid of that?

Taking a leap into the air from high above, the audience may find themselves waking up from the nightmare of Konsumschlacht. Hans-Thies Lehmann argued, on his recent trip to Beijing, that “not all the bourgeois audience cares about social movement and current issues.”[5] I would nevertheless say that there are alternative ways to live in unwaking dreams. Taking drugs or getting drunk both do the trick; there is no need to come to the theatre to get high. The original text cuts readers like a sword cuts flesh, and the audience expects a stabbing. Sadly, the sword of Wang Chong was too dull. The audience will not pay for cynical tricks on stage; and so they resist the killing of the author. As an avant-garde experimental group, Wang’s Experimental Theatre of Reve boldly played with fire by its choice of a very radical but complicated play. Unfortunately his attempt turned out superficial and shallow, relevant to neither our time nor the age of Heiner Mueller. At best, the production is a warmed over cliché of a cold war mentality imported from the west.

The audience felt angry, not only for the art on stage, but also for the real world it reflects. Therefore they were reluctant to leave. Having seen enough “overstuffed plague-corpses” in Chinese theatre in recent years, I found the Q&A that night more interesting. Now everyone will be world-famous for 15 minutes; our popular culture is like a battlefield of consumerism. Hamlets in the theatre industry are like ducks in water. Capital prevails. The critics’ responsibility is to defend the classics, to prevent the author from being murdered on stage, and to clear up the data base, so as to kill the Hamlet virus with knife of the truth. 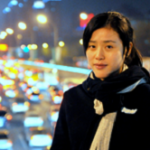 [1] Qingyan Zhang works at the Central Academy of Drama in Beijing, where she lectures on the history of European theatre and the history of dramaturgy written in Chinese. In addition to being a critic, she is also a translator. Her translation of Heiner Mueller’sHamletmachine was published in the Academy journal Drama (No. 2, 2010).
[2] The name of a 2003 German tragicomedy film
[3] A speech Mueller gave at the Shakespeare festival in Weimar on April 23, 1988. SHAKESPEARE A DIFFERENCE, Mueller Prose
[4] Translater’s note, Mueller Prose
[5] My notes from Hans-Thies Lehmann’s lectures of postdramatic theatre in Central Academy of Drama, Beijing, October 2010

Who Kills Heiner Mueller? A Chinese Performance of Hamletmachine