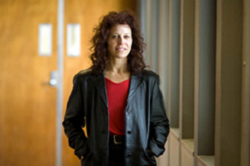 A lonely road demarcated by reddish dirt and a low fence stretches from centre stage into the distant cyclorama. The big black box of the Flipside studio is full of road, and as we enter the space I see a huddled figure, which seems already to belong to a different world. And not only the world of the theatre, dressed and illusory, but one of pain, darkness and despair.

Inxeba Lomphilisi – isi-Xhosa for The Wound of a Healer – continues Magnet Theatre’s investigation of immigration and desolation in the Western Cape of South Africa. Although isi-Xhosa is the primary language of black Africans born in the environs of Cape Town, local politics and the country’s history of apartheid have ensured that it is not often understood by non-black people. The programme is therefore sub-titled, with captions projected throughout on the cyclorama. There is no escaping the message.

Magnet Theatre actors convey a sense of commitment, immediacy and present-ness that propels the drama, makes comprehensible a theatre created and enacted in a language (isi-Xhosa) I do not share, and drives a series of complex stories in a ceaseless vista of highway. Urban rituals vie with traditional legends to produce a modern hybridity of black life and death. These are not happy tales.

The N2 is the major arterial road from Cape Town on the western shore of South Africa to the Eastern Cape. This highway links Cape Town to the towns of the north, providing a work force from villages and townships, and marking the brutal end of immigrants, runaways and itinerant labourers in the thousands. In this production, poor black Xhosa men, women and children struggle into ‘human’ form, rising from the dead to tell their stories of rape, theft, disease, murder and starvation. Wrapped in the traditional woolen blankets (that also sit across the audiences’ laps), they again endure the terrors of tribal initiation. They collapse at roadside amid the shriek of wet tires and twisting metal. They are witnessed and soothed by a traveling sangoma (practitioner of traditional African healing arts), typified by amulets and pockets of herbs and relics, who happens along the unmarked graves and lives out her own tales of betrayal and loss. The wraiths are eventually seduced back into the red dirt of the highway, and buried in their own storied earth.

Earth is one of many rich metaphors and material properties incorporated in this vignette. Dirt is lifted in the fingers and kicked underneath. It is literally applied to the face and body in the manner of initiatory rituals and ceremonial protection, and cast at the dead as a means of sending or conveying them back. The sangoma’s handling of the earth is reverent, fearful and authoritative.

The sangoma (the extraordinary Faniswa Yisa) has traveled the N2 for a very long time and, like the dead, appears to be one with the road. Stories, channeled through her, are seen through her eyes and inhabit her body; the dead dance with and through her. Co-director Mandla Mbothwe has said of this production that ‘without the stories of the “disappeared” we are not whole. Without their stories our spiritual and traditional being is empty. Inxeba Lomphilisi tries to place the stories back in the landscape.’ The healing woman brings the possibility of rest to the un-dead, and recovery to the land.

Magnet Theatre is distinct among other theatres in Cape Town for its concentrated use of isi-Xhosa language, poetry, songs and dances. Magnet demonstrates the calibre of performance that can be achieved through training, tight ensemble work and sensitive directing. The singing and dancing is virtuosic, with six- and eight-part harmonies that seem to issue organically from the work, and the high kicks, stomps and rapid footwork that typify Xhosa traditional dancing. The ensemble works masterfully together, showcasing the ability of these actors (many of them quite young and still in professional development with Magnet).

The actors are back-screened by a wash of images from printed word to moving pictures (video.) English language translations of the poetic Xhosa dialogue are often out of sync with the spoken dialogue. Images of the road, and particularly the white wooden crosses marking places of death, abound. Though initially evocative, in their recurrence the crosses tend to detract from the poignancy of the stories. With so much happening in the piece, the recorded images threaten to swelter the present drama. As with the previous production—ingcwaba lendoda lise cankwe ndlela – the grave of the man is next to the road—the use of multi-media often proves superfluous, breaking the theatrical form without contributing the estrangement of Brechtian rupture. With work this rich, it simply is not necessary.

Inxeba Lomphilisi is a new production from the same creative team that produced ingcwaba lendoda lise cankwe ndlela – the grave of the man is next to the road in February 2010. The significance of this can be found in the Magnet Theatre’s ambition to conceive and produce a triptych of road plays—of whichInxeba Lomphilisi (The Wound of a Healer) is the second—in as many years. With this mission only one play of the three remains to be created.

But what is most significant, notable and also commendable about Magnet Theatre’s productions is the composition of their audiences. These audiences have the very rare distinction of being predominantly black and Xhosa-speaking—an arresting phenomenon in a city where the prices charged by theatres preclude the bulk of the populace from attending. This difference makes a night in the theatre an event of rapprochement, with glimpses of a new road ahead. 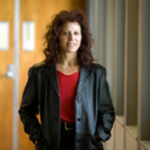 The End of One Road, the Beginning of Another: Xhosa Theatre in Cape Town