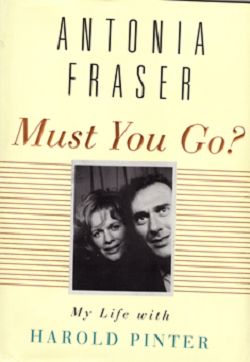 The name Harold Pinter, renowned British playwright, conjures up notions of austerity and menace that emanate from a general impression that his work typically lurches along precipitous Beckettian pauses over which characters teeter as on the edge of complete annihilation.

The impression may have some validity. However, another, much fuller personality emerges from Antonia Fraser’s clear-eyed, effervescent memoir (done in diary form) of her life with Pinter. Somewhat surprisingly, we get to know him as a man of humour, vulnerability, self-irony and romance. This is an insightful story of two professional writers, both fully fledged members of London literati meeting in mid-life and mid-career, engaged professionally and personally as privileged molders of public opinion.

But it is also a very private story of two richly endowed people made even more interesting by their differences. He is from Britain’s lower middle class while she is the daughter of a British peer. He is very much left wing while she is married for eighteen years to a Conservative Member of Parliament. He is Jewish (and fairly neurotic). She is Irish Catholic and publicly proper. “I considered myself to be happily married,” says Fraser in an early journal entry, admiring her first husband, the father of her six children for his decency and detachment. “Harold, I learned…did not consider himself to be happily married.”

Fraser’s cool matter-of-fact tone — and one would expect nothing less from the author of such historical works as Marie Antoinette and Mary Queen of Scots — both reveals and conceals. Knowing Pinter’s precision with language, how accurately his plays articulate the destructive forces bubbling away in crucibles of the social situations he unflinchingly creates, one can see here how the logics of these two word masters match up. Especially in contrast to his first wife, Vivian Merchant, an avowed anti-intellectual and as apparently ‘dramatic’ offstage as on. In his standard biography, The Life and Work of Harold Pinter (1996), British critic Michael Billington clearly identified Pinter’s creative fascination with what he suggests is the duality of the female — perhaps in life as well as in the plays.

Fraser, an enthusiastic, modern Pepys in her documentation of the passing scene, does not articulate the deepest levels of their passion, the real mystery of their attraction, although it is there, below the surface, solidly informing every journal entry. Fraser isn’t the poet. Pinter is. In fact his poems to her acknowledge that core intensity, its transformative power: “My heart is not a beat away from you/ You turn and touch the light of me./ You smile and I become the man/ You loved before, but never knew.” His avowals of love to her seem as profound as they are simple. “I love you and want to marry you,” emanates from a man who sees in partnership with this woman his fullest self-expression, a realization that prompts him to override her objections with a happily insistent: “I like being married. I think we had better get married.”

Fraser’s account of how she breaks the news of her new relationship with Pinter to Hugh, her exceedingly likeable husband, adroitly mingles tragedy and farce. When Hugh asks her whether she is in love with this someone else, he is shocked at her affirmative reply but seems to accept it when he comes to understand that his wife has at least fallen in love with “the best living playwright.” Some weeks later, she brings both men together and then proceeds to watch her husband and lover companionably drink whiskey amidst amiable discussions of cricket, the West Indies and Proust.

Of course Pinter and Fraser do take the plunge together and, surviving the onslaughts of a prurient press, the dislocation of various moves to accommodate writing and children. Valiantly, they charge off together on a trajectory of fully self-determined lives.

Fraser’s diaries delight in the couple’s many professional friendships, writers with whom Pinter shares process, among them Tom Stoppard who, we learn, once confronted Pinter about too much swearing in No Man’s Land. We find the two playwrights also sharing cricket. There’s even a lovely photo of Pinter and Stoppard striding forth on the cricket pitch with Stoppard as the wicket keeper in bright red gloves. It comes from Fraser’s first foray to watch Pinter in action. She recalls a strenuous game in which this cool collected playwright roars down the pitch, falls, injures a leg and has to be carried away on a stretcher. Gone are any analogies one might make between the long leisurely game and those famous Pinter pauses. In fact cricket, we learn was rigorously recalled by Pinter in No Man’s Land, where the characters are named after players from a pre-war cricketing golden age.

Much more productive for thinking about Pinter pauses are some of his moments with Samuel Beckett whose work Pinter admired greatly and in whose company Pinter spent much time. Upon first meeting him, Fraser herself is “knocked sideways by Beckett’s physical appearance, the elegant severity of his tall spare figure, thick grey-white hair and aquamarine eyes.” A later entry sees the two playwrights sitting in La Coupole in Paris moaning about the world. “I’m sorry, Sam, if I sound very gloomy,” says Pinter. This is followed by Beckett’s response (no doubt after a long pause): “Oh you couldn’t be more gloomy than I am, Harold.”

Fraser’s effervescent phrase-making conveys many memorable moments of close encounter with luminaries such as Peter Hall, Simon Gray, Vaclav Havel, John Fowles, Robert Shaw and Salman Rushdie. These represent truly joyful friendships for both Fraser and Pinter which nourishes them both creatively and personally. And there is never a moment of professional rivalry between Fraser and Pinter. They offer suggestions on each other’s work, disagree at times but they never compete. As cultural heavyweights, their genres and modes are different enough to always avoid acrimony.

Pinter’s sense of world citizenship and the extra duties that he felt his work as an artist required of him continued to develop through the eighties and nineties. Through Fraser’s eyes, we see his debates with Joan Didion about US policy towards El Salvador. We understand Pinter’s growing frustrations with the personal aspects of his various political battlelines. “Why don’t they concentrate on what I’m angry about?” he tells his wife. After his death, she records finding a place-card from some forgotten dinner party, on the back of which she had written in response to an argument at the table: “Darling – You are right. So SHUT UP.”

During these years of marches and demonstrations and PEN events in support of imprisoned writers around the world, both Fraser and Pinter agree with playwright Christopher Hampton’s assessment that “If one guard kicks one prisoner less hard, it will have been worth it.” Together they witness the hammering down of the Berlin Wall and welcome Vaclav Havel to London (after their very affectionate time with him in the Czech Republic) where they listen to the Queen express interest at Havel’s change of life from playwright to president with the words: “But of course you were always working with your head.”

Fraser refers to an existential despair that she felt descended on her husband in the mid-eighties, partly due to the state of the world and partly to his giving up smoking after her former husband dies of lung cancer. Adverse critical and popular response to his interpretation of a Simon Gray play further extended this melancholia which, she says, spread across the surface of his life “like black water lilies,” (illustrating also that when it comes to understanding the man she loves, Fraser does find poetry).

His creative angst at this time is tempered by holidays with both family and close professional friends such as Ronald Harwood and Simon Gray. After one week on a Greek island where the three of them gave private readings of their new plays. Fraser quips that their harmony was quite “miraculous,” since it could, after all “have been an Agatha Christie situation.”

The last section of the book, entitled Steps Downward, chronicles Pinter’s physical demise and the triumph of their love over heartbreaking pain. In 2001, Pinter was diagnosed with esophagal cancer. Their lives continue as full as ever between chemotherapy, the loss of his brilliant black hair, impossible diets and surgeon consultations which map the parts of his stomach that will be cut. He even writes his own cancer poem, the last stanza of which reads: “The black cells will dry up and die/ Or sing with joy and have their way. They breed so quietly night and day,/ You never know, they never say.”

Each of the lovers worries endlessly about the other. When the cancer is for the moment defeated, Pinter is diagnosed with an auto immune blood disease “where the body attacks the body.” Then blazing joy. One morning, from his study, Pinter calls to her office in another part of the house saying, “It seems I have won the Nobel prize.” The house fills up with flowers. Pinter tells her that he is determined that his Nobel speech will be “wise, lucid, sane and tolerant.” Unable to get to Stockholm, however, and now in terrible physical discomfort, he records his pugnacious speech at the BBC. “Sometimes,” he says, “a writer has to smash the mirror.”

Near the end, he writes her a poem, the first line of which reads: “I shall miss you so much when I’m dead.” They take comfort in their favourite Shakespearean sonnet, ‘Let me not to the marriage of true minds.’ Life goes tumultuously, bravely on. Until it stops on December 24, 2008. She kisses him and leaves the hospital room admitting that it is finally time for him to go, poignantly echoing the words he said to her upon their first romantic meeting thirty years earlier: “Must you go?” 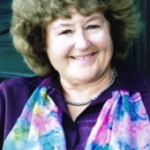 [1] Patricia Keeney is a Professor of Creative Writing based in Toronto as well as a poet, novelist and theatre critic.

Must You Go? My Life with Harold Pinter