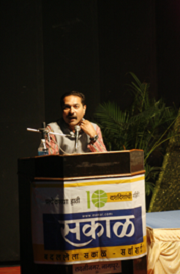 This paper – by focusing on The Budhan Theatre of the Chhara Community of Gujarat – attempts to understand how theatre responded to the forces of the socio-political change during the colonial period, growing out of the milieu of conflict between cultures and social hierarchies, between economic and political sectors, and among ideological groups.

Theatre in the colonial period was an important cultural site of dominant political forces and a counter-hegemonic struggle. It was an important site of colonial authority (India got independence from the British rule after a long fought struggle on 15th August 1947). It accorded an indulgent status to its culture by claiming it as ‘high’ while shunning indigenous cultural forms to a ‘low’ status. Indigenous performances were considered as ‘seditious’ or ‘obscene’ and prejudicial to the public. This can be seen as a voice of committed colonialism preparing its grounds for the ‘civilising’ mission.

However, society is far too complex to permit a monolithic hegemonic control of the dominant sections and the authority over every aspect of culture – and here theatre is no exception. This paper attempts to understand how theatre responded to the forces of the socio-political change during the colonial period, growing out of the milieu of conflict between cultures and social hierarchies, between economic and political sectors, and among ideological groups. Though it presents itself as a relatively simple task juxtaposing theories, it becomes problematic with regard to theatre, principally as theatre is a composite performing art, incorporating so many aspects, deeply entrenched into the other.

The article restricts to the study of a theatre in Post-Colonial India: ‘The Budhan Theatre’ of the Chhara Community of Gujarat[2] (Denotified tribes), whose intention of theatric presentation has been the direct result of political policies of the Colonial Raj and the mishandling of their cases by the politics of Post-Independent India – a successful theatre of protest for all these years.

BUDHAN THEATRE OF THE CHHARA COMMUNITY OF GUJARAT

When I first met Dakshin Nandlal Bajrange, he would have passed off as any other young, carefree teenager zipping through life. But talking to him revealed a person who had seen fear and brutalities far too many, for one as young as he. His only crime was that he belonged to the family of Nomadic tribes, The Chhara’s, shunned by society, demeaned by authorities, stigmatized for life. But he chose theatre in a most innovative way, to find comfort, solace and lead his generation on a path of dignity and self-respect. Still this was no cakewalk but hid a story of a journey of resistance and a battle his theatre group is still fighting.

Apart from the fact that the Nomadic tribes fought with Valour in the 1857 upsurge against the colonial Raj, they posed a threat to the British. They were traditionally nomads and performers -singers, dancers, acrobats, artistes -, and well connected to distant lands, something that the British detested. So they were rounded up and confined to barbed wire enclosed settlements[3], and with it their art. Cut of from the outside world, they had no source of livelihood and hence resorted to theft.

The Britishers tagged million of such People and named them ‘Born Criminals’ to create ‘Criminal Tribes Act – 1871’. An inhuman act, which branded 192 tribal communities as ‘Born Criminals’ and made life hell for them. They were a lost community and totally forgotten when India got independence and later laid down its constitution. Though the Act was repealed in 1952 the Stigma is still there. Chharas are one among those communities who were branded Criminals by colonial rule. And to this community belongs Dakshin.

On release from the settlements, his Grandfather and later his parents resorted to petty theft and crimes, but vowed not to let his generation take on this life. So he was put into a school. Enduring years of a tortuous time there, ostracized by other children, humiliated by teachers, he refused to budge, even as his parents resorted to theft to support him. But the stigma of belonging to such a lineage sticks on and, In spite of being educated, his life is a struggle. He is a graduate from the Gujarat University in Psychology, award-winning Filmmaker, and founder of the Budhan Theatre, having written, directed and acted in many productions including the play Budhan, which has been translated into many languages and performed worldwide. He is a faculty at the National Tribal Academy, Tejgarh and a fellow at the Bhasha Research and Publication Centre, Baroda. He represented the Nomadic and Denotified Tribes of India at the U.N. in 2007 and various universities in the U.S.A. Currently he is on a Ford Foundation Scholarship for direction in the University of Leeds, U.K. In spite of these awesome qualifications, ironically till day he never gets to celebrate a single festival at home, as he could get rounded up by the police in anticipation of communal disharmony by his community, and hence has to disappear during these days.

It was the custodial death [wrongly so], of a toy seller, Budhan, in Purulia district of West Bengal and the landmark judgement in favour of the Nomadic tribes, that initiated the Budhan Theatre, supported by Scholars and activists, Dr Ganesh Devy and Mahasweta Devi ,wherein the tragic story of this unfortunate man was enacted. It got an overwhelming response and set the stage for further theatre activities.

That they were artistes helped them to act, something that came to them naturally. Budhan Theatre is Tradition, Culture, Transformation, Weapon to Protest in a Non-Violent way and medium of development, which begin in 1998 in the infamous area known as Chharanagar in Ahmedabad in Gujarat. Still people have a mindset that it is a ghetto of ‘Thieves’ and Bootleggers and they are even today ‘Forever Suspect’ in the eyes of legal and judiciary system.

Till date, Budhan theatres has made and performed 21 plays and among them 8 plays are performed by Chhara children. Now they have learnt how to express themselves through Theatre Art and develop Theatre with no ‘Boundaries’. They are writing, directing and composing plays. But to practice theatre being a Chhara is so hard. There are around 50-55 Theatre artists and among them 35-40 are children. Some performers among them or their parents have been locked up in jail either for theft or implicated in false cases, which is a regular practice by police on all DNT communities. No life security and violation of human rights is a regular practice by system and society. They don’t have a regular theatre space, so continue their rehearsals on Rooftops, empty garages, roadside space and the likes.

Most of the plays are anti-police, arisen out of their personal experiences. They individually can feel the trauma of Budhan. Even today their performing space is outside a police station, because there is no other place in Chharanagar. The performers are often harassed, arrested or even asked to stay outside the police jurisdiction. Knowing fully well that they cannot challenge the police at any level, their only strength lies in speaking and expressing themselves through their theatre.

Today Budhan theatre has developed its own Theatre style in the field of existing theatre theories. By practicing theatre in Budhan Theatre, they can see the transformation of performers and the community. A place earlier ostracised by society is now a meeting place for theatre enthusiast thronging the venues to see their plays. In fact, Budhan Theatre is reviving the age-old traditional of Chharas being artistes and performers, in a positive manner for social change and community development, while being a cultural voice of protest of Denotified Tribes, against all odds and atrocities. Budhan Theatre is trying to remove the Criminal Stigma on Chhara Tribe. Through theatre they are sensitising mainstream societies for social acceptance and to the system for their fundamental human rights.

Apart from the activity of Chharanagar, Budhan Theatre has developed 7 theatre groups, gave theatre trainings and prepared 219 male and female actors, writers and directors in Gujarat, who are practicing ‘Budhan Theatre style of Protest Theatre’ in their areas. It has also started its films wing in 2004 with the documentary Flight for Survival which won Best South Asia Documentary Film Award. Other films made were thought for Development, Bulldozer, The Lost Water and Actors. It also has its own well-stocked library where the children and adults come to read. It is here that children from the age group 5 to 14 have come, read and prepared many scripts of their own.

With their persistent theatre activities and a marked change in the younger generations they are slowly getting their due recognition even in the police hierarchy. Children doing theatre are escorted in police vans to the venues. Dakshin was invited to the police Academy, to demonstrate how he had used theatre for the reforms made in the youth. They plan to apply this model in other states too. Sadly at one end these positive inputs continue but at the other end the atrocities against the community persists.

Though all this seem like a happy ending to a tumultuous journey, their struggle for social acceptance is ongoing. At one end is this reality and at the other their strong commitments to the arts.

That is our life. I never write a play first and then perform. I always first improvise a play, then perform and then write a play… It helps to involve all the actors and we always take up realistic issues. Budhan Theatre is struggling to make Chharanagar a Cultural Activity Hub instead of being labelled as a Criminal Tribes Hub. But it is an uphill task and I just hope our voice is heard and struggle acknowledged.

Even as I interviewed him, another tribal Budhalal was killed in custody, a false statement issued, a protest went up, a play Budhan to Budhalal scripted and performed by Dakshin’s group, an enquiry initiated, fresh reports showed that he was wrongly brutalised and killed. Attempts are now on to bring to book the accused. This is the power of theatre. But the question is for how long? 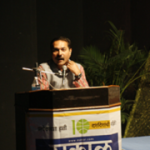 [1] Ajay Joshi has been practicing dentistry for the past 23 years in his clinic in Pune, Maharashtra (India). He has a Master Diploma in Journalism and Mass Communication and his PhD thesis addressed the ‘Role and Contribution of theatre criticism toward Marathi Theatre’. He has written on culture, especially theatre, for The Indian Express for the past eight years, translated plays and organized several workshops on theatre, as the recent course on History of Marathi theatre, at Marathwada University, Aurangabad. Recently – May 2010 – he organised a three day theatre festival of the Budhan Theatre (A theatre of protest of the nomadic tribes), from Charranagar, Ahmedabad, Gujarat, in Pune.
[2] Gujarat is a state in the North –West of India.
[3] These enclosed settlements were called Rehabilitation Centres, one of the biggest being in Solapur.