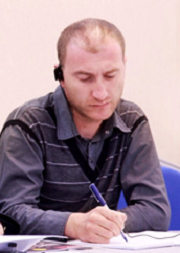 Raspberry, adapted and directed by Levan Tsuladze at Marjanishvili Theatre in Tbilisi, Georgia.

The production I am about to review is not played out on stage. Neither is it played out in theatre lobby, nor in the basement or up in the attic.Levan Tsuladze offered his new production Raspberry to his actors on a small stage erected specially for them in the parterre of the theatre. As for the audience, it was offered an amphitheatre of iron construction directly on stage. It would certainly be a lie if I said that I have never watched a production from stage. Georgian and foreign theatre directors use seats-on-stage for interactivity, for engagement of the audience in the story, for the directness of contact between the actors and the audience, and for the creation of an intimate atmosphere.

Levan Tsuladze as an artistic director of Marjanishvili Theatre never had particular problems with establishing a close contact with the audience. There has never been a single production of his, which did not have a broad audience, although I can remember one unpopular production called Snake Eater, staged in Vake Basement Theatre which was quickly removed from the program and equally quickly forgotten by the audience. Still, Snake Eater was a production with a very particular idea to it. It was a production by a deeply intellectual director prone to a philosophical and artistic pattern of thinking.

I was reminded of Snake Eater by a recent production staged at Marjanishvili Theatre called Raspberry. It is based on University of Laughs (2004), a play by a contemporary Japanese dramatist, screen writer and director Mitani Koki. For me Levan Tsuladze has once again distinguished himself as one of the most interesting directors of our time.

Raspberry shows the director’s attitude towards certain issues, it shows his world view, his refined way of narration and first and foremost his great humor. Humor is evenly distributed throughout the production, but not too much for the audience to lose sight of the main line of the production – censorship vs. an artist’s freedom, an issue which is quite interesting and at the same time hot, essential and important, and not only in Georgia.

For the first time in his career Levan Tsuladze reversed the places of spectators and actors. I am not sure about the final outcome of this particular reversal nor would I wish to interpret the director’s idea behind it, but I vividly recall one particular scene, when the stage started to move and the audience became a witness and a participant of quite an odd spectacle. When the stage started to move, actors stepped down and engaged in this movement together with spectators. The lit backstage transformed into a white and green labyrinth with Neo (Nato Murvanidze) and Tsubaki (Nika Kutchava) running through it. I do not think Levan Tsuladze placed an audience on stage specifically for this uniquely staged mise en scene. It was the play which supposedly gave him the hint.

Although the action takes place in the 1940s, in Japan during the war (we are told of this from the radio), one does not feel the distance. Details characteristic to our reality emerge from the very beginning. There is a censor (in other words establishment in charge of culture), who declares that he does not visit theatre, nor is he interested in literature, that he only accidentally found himself in the cultural sphere, and even more the censor thinks censorship to be useless. If not the director himself, his colleagues have definitely been in a similar situation in the past. Even more, Georgian “censorship” has recently banned a premiere at Meskheti Theatre – Balcony by Otar Katamadze. A spectator and reader may be astonished by this fact, but Levan Tsuladze’s production directly comes in touch with this hot issue and offers us a solution to the problem.

Unfortunately censors similar to the production’s main character Neo portrayed exquisitely by Nato Murvanidze are hard to find in Georgian reality. As for Levan Tsuladze, he depicts with his production an ideal version of the censor, when she herself becomes an appreciator of the arts and is “poisoned by theatre”, becoming the main stimulator and generator for the artist’s work. The censor falls for literature and theatre. Nato Murvanidze’s character is a true professional of her own work. Her professionalism, high degree of responsibility and strong character make her into a supporter of the arts. The good censor in Levan Tsuladze production helps develop tendencies that assist national interests and refinement of the artist in the first place.

The production is built around discussions between two characters, Mrs. Neo the Censor (Nato Murvanidze) and Mr. Tsubaki the Dramatist (Nika Kutchava). These discussions are led in refined Georgian literary style (the play is translated by Nino Kantidze, her language is academic but active), and it reveals the standpoints of the parties. I have never seen Nato Murvanidze in a similar role. She undergoes not only an outer transformation but an active one as well. Furthermore during the two hour production her character is under a constant metamorphosis. A strict censor undergoes a step by step change in accordance with the logical chain of events, transforms and becomes a completely positive character. For me Nato’s Neo is not a negative character even at the beginning of the production. She is a censor defending the interests of the State. She has the taste of a regular reader and does not allow even a small amount of lyricism to enter her.

Tsubaki – the character played by Nika Kutchava is a positive character, a bleak dramatist at a glance undergoing a similar transformation as Neo. At the end of the production he is a mature, refined dramatist. Conflict between these two positive forces is the weapon of the production which makes it so attractive to the audience.

If in the first part of the production Nika Kutchava’s character conducts master classes for the ignorant Neo, in the second part of the play it is the dramatist who becomes Neo’s student. This process is very fruitful and successful for both sides and of course for the State. Transformation of Nato Murvanidze’s character into an arts supporter is gradual. At the beginning Neo is so strict that she does not even accept a raspberry pastry from you in fear it might look like a bribe. As for Nika Kutchava, he has played leading roles on major and minor stages of Marjanishvili Theatre before, but nothing of this scope as of yet.

Neo and Tsubaki even become friends as though the dramatist feels comfortable with the censor. One theatre critic saw this connection as sexual attraction between them, which I think is quite far from true. The director did not give any hint for it. On the contrary, he puts emphasis on pure, typical, healthy artistic cooperation between the two. Their emotions and exultation springs from the love for the arts and artistic passion.

At the end the dramatist says goodbye to the censor. He is going to war. It seems as though he has no hope of return and that he views artistic work done by the two as a waste. And here the idealistic censor takes charge again and cheers him up with such artistic honesty and conviction that the audience is completely swept away. This very scene leaves the sign of optimism in the audience.

Levan Tsuladze has staged a production of major importance. A production which is very positive on one hand and should be very beneficial to authorities on the other. If and when the authorities came to the theatre, at least to this production, it would a priori make them fall in love with theatre. 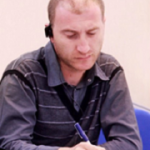 [1] Lasha Chkhartishvili is a doctorate student and works at the Arts Research Institute of Ilia State University in Tbilisi, Georgia. He is also the director of Modern Georgian Theatre Research Center. He is the author of five books and of 400 reviews. He was awarded the best student of theatre history in 2004, and his theatre review was awarded as the best of the year 2005 in Georgia.