These remarks are based on a keynote speech I delivered at I.A.T.C.’s Tokyo symposium in 2006. 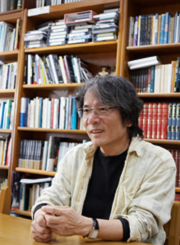 Critics are often thought of as “ideal spectators,” but this is not really so. If we look at “theatre” and “criticism” in their narrowest senses, we can see that the basis for the relationship between theatre maker and spectator is that their experience is simultaneous, while that of theatre maker and critic is sequential. In this particular sense, it is not really accurate to think of critics as ideal spectators.

This difference regarding when the response to the theatrical event takes place speaks to why theatergoers are so sympathetic to theatre makers, and in turn, why theatre makers are so hostile to theatre critics. Their simultaneous presence in the same space creates a friendly atmosphere between them, and nurtures the empathy between the stage and the auditorium. By contrast, the critical activity takes places at a different time and in a different space. This creates an aesthetic distance between watching and responding to theatre, and destroys the warm, hypnotic euphoria shared by spectators and performers.

And there is another great cause of tension between performance and criticism, and this also comes from the differences in when the experience and the response take place. That is the direction of the influence between the two. Criticism influences theatre; not vice versa—at least not through immediate interaction. It is mutual only in the broad sense, in the long term. In the short term, many practitioners are suspicious that the critics will distort the spectators’ understanding by misreading and judging their productions unfairly. This is a great fear, because a poor review can have a negative effect on the spectators’ opinions, and then on the box office receipts. We often hear grumblings of this kind from eminent artists. Often, they take the position that the best policy is simply to ignore the reviews:

“Don’t pay any attention to the critics; don’t even ignore them.”

“A critic is a virgin who wants to teach a Don Juan how to make love.”

“The only critic I respect is the public.”

– Irving Wallace, Mark Twain and others

“I have seen too many bad reviews in my life. In America, the more bad reviews artists receive, the faster they grow.”

Unfortunately—but understandably—it is very hard to find prominent artists who give critics the right to be negative in their reviews. But still, we have a couple here:

“I’d rather have a critic jump on me than praise me. When a critic says a movie is great, he’s just building up the importance of his job. Critics do to movies what plant lovers do to plants. They water them until they die. It’s called assassination by adoration.”

“A critic is always serving the theatre when he is hounding out incompetence. If he spends most of his time grumbling, he is almost always right.”

A good majority of practitioners are harsh regarding criticism and critics, not because they think criticism is not important, but because they know it is; criticism does affect their production if it is written by influential critics. Their hatred of criticism is… naive! Somewhat like a child who needs continual compliments from his mother to feel loved, such practitioners say they want to receive “constructive criticism,” by which they mean “only praise.” Tallulah Bankhead spoke to this in all frankness: “To hell with criticism, praise is good enough for me.” Some may even prefer false praise to worthy value judgments. The most pathetic form of “practitioner childishness” is seen when they reject negative criticism from the same critics whose raves they have wholeheartedly accepted before. I know several Korean critics who have suffered from this contradiction, including myself. The dynamic becomes even more distasteful when we see practitioners who get angry at negative reviews of their own works, while enjoying harsh, negative reviews of productions by other artists.

Another reason for their contempt for criticism is that they take it as the final judgment, fair or unfair. The fear that their works might be thus recorded in the book of theatre history makes them overly defensive, to the extent that they attempt to cordon the critics off from judging their works. I admit that we critics are partially responsible for their cynical views of criticism. We have lost their trust, from time to time executing our criticism unprofessionally, contaminating our work with favoritism, friendship, sensationalism, etc. Therefore, some practitioners simply cannot consider us authoritative enough to make useful evaluations of their work. And yet, this is still another misunderstanding of criticism. It is inevitable that theatre criticism will contain some elements of value judgment, but that is not all. Criticism is not the final, “official” judgment of worth, positive or negative. It is a form of subjective discourse, in which an individual critic tries to remain as objective as possible. As our colleague Michael Billington says in his book, One Night Stands: “Criticism… is not the last word: simply part of a permanent debate about the nature of the ideal theatre.”

Tension between practitioner and critic can also arise from our own approach to criticism. If you will allow me a personal note: I, for example, write reviews to be heard and responded to. So I do not disagree entirely with English actor Nichol Williamson, who said, “I think [critics] are more terrified than actors, in a way; they want to be liked, they want to have an impact, too.” Although I am not terrified, nor do I try to be liked, I certainly want to have an impact. And it is very difficult to have an impact—that is, to be heard and responded to—in a noisy country like Korea, where everything is noisy: politics, culture, the way of life, the arts, etc. I think this unique culture has forced the Korean theatre to be noisy, as well, both physically and psychologically. You need a very sophisticated strategy to be heard and responded to in such a situation. And—although I am a diplomatic gentleman most of the time—I do not mind being blunt in my criticism when I have to be, when I find that there is no other way to reach the artists and the poor audience. When it works, blunt means effective. Once, I was so blunt as to crown a play at the Korean National Theatre with the title, “The National Theatre Embarrasses Us.” In that review, I examined meticulously the mundane, inartistic aesthetics of the production. It was blunt, but many theatre people still remember me for that review. Indeed, the noisiest director in Korea, Lee Yun Taek, who is also the most critical about the critics, even applauded me publicly, saying that my articulate critical evaluations had the a power to provoke shock and change in Korean theatre. But I always try to make sure, when I choose to be blunt, that I do it as an act of debate, not as a power struggle. In the relationship between artist and critic, tension is much better, even more desirable, than indifference when it comes to serving the theatre.

In this context, I would like to talk about this performer-critic relationship with a focus on the situation in Korea. Roughly speaking, there are four types of critics in Korea. The first kind I call the Pedantic Critics—those who are mostly interested in their image as intelligent and knowledgeable scholars of cultural theory. These do not care whether they are read or understood; they do not need any interactive relationship with the performers because they are intentionally too esoteric to communicate anything. Ironically, this has been trendy since the late 1980s, when the job of critiquing left the hands of the old humanities professors, and rolled over to the young theatre scholars.

The second type I call the Educational Critics—those who try to discover the social relevance of a given show, offer their judgment, and do not mind giving prescriptions for improving the staging, if necessary. When critics make prescriptions, they make their relationship to practitioners very uncomfortable, as you can easily guess. Your prescription will only be respected if you have sufficient experience in practical theatre—only then can you create a sound interactive relationship with the artists. And I believe I belong to this second type.

Thirdly, we have the Interpretative Critics, who busy themselves reviewing the subject matter of a play and the production aesthetics employed to realize it. They read plays without judgment. They analyze without prescriptions, creating no conflict with the practitioners. They are always sympathetic to the practitioners, and are thus well-liked by them. They make it their principal principle to review only those performances they like. The relationship they make with the performers is friendly, but hardly interactive. We quite often observe that the Educational Critics of the second, controversial type, turn into this third, passive one as they grow older. A prominent artist such as Oh Tae-Sok enjoys the company of a great many critics who belong to this type.

Lastly, there are the Creative Critics, who use theatre only as a springboard to dive into their own philosophical thinking. Their texts are more essay-like than analytical, more literary than critical. They begin their reviews from way before the show starts and end it way after it is over. They are well-received by the readers… who do not go to the theatre. Their relationship to the practitioners is almost non-existent.

In Korea, you do not have to belong to only one type. Actually, most of us belong to two or even three of the above types, or sit somewhere in between. The point I want to make here is that what you are as a theatre critic determines the nature of the interactive relationship between you and the practitioners.

Theatre criticism is shrinking around the world in terms of its space and power. As critic Michel Vaïs has reported, criticism is practiced more and more by amateurish journalists whose knowledge and experience of theatre is very limited. Or, as colleague Kalina Stefanova has observed, theatre criticism tends more and more towards sensational or yellow journalism. It is pretty much the same in Korea. I have seen that around the world, we have quite a dark picture of theatre criticism. We must fight against such global trends towards anti-intellectualism by creating our own space, by developing more exciting and effective ways to communicate. I have been working towards this with my colleagues through our quarterly, The Korean Theatre Journal, which we have been publishing since 2000. We have a firm belief that criticism is necessary to recording the aesthetic history of the theatre.

In order to breathe life into our diminishing theatre criticism, it is crucial for us to keep discussing how to survive in the ever-changing environment of post-dramatic theatre.

The Relationship Between Performance and Criticism