The original, the re-staging and their differences 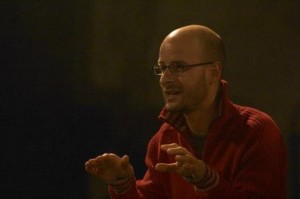 The Maska 001 Festival premiered reconstructions of two paradigmatic (Slovene) theatre performances from the second half of the 20th century.

Emil Hrvatin might not be the only one today to explore various aspects and regimes of ‘gazing’ in theatre and dance, but he is probably one of the first directors in Slovenia who has systematically engaged the gaze in different roles. In fact, it is the gaze that always plays the ‘main role’ in his performances. He has worked on this theme from several different angles: cultural, sexual, spatial, historical, optical and in terms of event. One of the structural points of his performances seems to be the tendency to establish an inter-subjective relationship between the performance and the spectator. We might like to believe that in the case of theatre, this is something that goes without saying, but often it is not. The vast majority of performances we see today remain merely objects that can be gazed at without interruption, undisturbed, from beginning to end. However, in Hrvatin’s performances, (particularly the more recent ones), there is always a moment when the spectator suddenly and unexpectedly becomes objectified. There is a traumatic moment when the performance suddenly notices him/her and s/he is given back what s/he as a spectator invested, in a condensed way, as a subject. For this reason, I believe that an ‘event’ (aesthetic, cognitive, or other) in the theatre, if this translates itself into an Event in a Badiounian sense, is always a parade-like structure. Psychoanalysis would define this as ‘I think, only if there exists a place outside of me where the truth about me is articulated.’ In other words, this is the traumatic place of a gaze which knows more about me than I do about myself. This place is, at the same time, the recurring condition of self-awareness.

In his reconstruction of Pupilija, the gaze is, among other things, part of something described by a German literary theorist as the ‘aesthetics of reception’. This means that the reception of a work of art (i.e. the gaze at it) is not some kind of unchangeable fact that lies beyond time. It is culturally and historically conditioned and therefore changes with time and under different cultural circumstances. What Hrvatin had at his disposal were the screenplay of the original performance and the sum total of receptions of the event (an edited and incomplete film record, reviews of the event, performers’ comments, among other things), but due to the ephemeral ‘nature’ of theatre, he had no access to the event itself.

Where does the historicity of Pupilija then lie? Let us face the truth and say, unfortunately, mainly in the scene when the Chicken is slaughtered (it is interesting that we always talk about one Chicken when we talk about Pupilija, although this Chicken has been played by many chickens). Unfortunately, the ‘official’ history of Slovene theatre has never gone further than this poor Chicken. The Chicken is as much the place of (usurped) memory as it is the place of oblivion of Pupilija as a performance. Pupilijawas one of the first performances that used an ‘empty space’ as a testing ground for latent events, that introduced multitextuality into Slovene performances (different textual genres are combined in one performance: folk songs, modern poetry, horoscope, genre texts from daily newspapers, reference from pop culture, and so on), that did not hesitate to use various forms of performance practice (choreography, dramatic dialogue and monologue, physical actions, performance and body art, for instance), that gave up the imperative of body and acting techniques in the sense of skill, and in which the sequence of scenes did not aim to construct a unified sense of time (individual scenes could be linked to each other equally effectively in other sequences). In 1969, all these facts dealt a blow to a regime whose official culture had an authoritative view of art, which was the politics of Pupilija.

On the one hand, Hrvatin structures his reconstruction of Pupilija as a staged exhibition of documentary material where live stage action consistently follows original film records (the spectator simultaneously watches the film and the reconstruction, projections of reviews and comments about the original, Jovanović’s ‘voice of the screenplay’, etc.) The reconstruction ‘plays the role of the original’ but with Brechtian “alienation”, as it consistently reminds us ‘Here in front of you I am reconstructing a (non-existent) original.’ On the other hand, towards the end, it increasingly problematizes its very (in)ability to reconstruct its ‘eventness’, which gradually converts the restored Pupilija into a new performance. When the performance enters the ‘blind’ field of unrecorded sections, simulation takes over. In the scene with the bath-tub, Hrvatin simulates the original record with a new cast which restages the scene live without props. In this way, it gives the records with the original material the status of a merely mediated reality and articulates the absence of the real original.

The event and high point of ‘difference’ (between 1969 when the chicken was slaughtered without hesitation, and 2006) happens, of course, in the final scene with the Chicken. This is when Hrvatin leaves his author’s seal on Pupilija and the audience. In compliance with the changed political context, the spectators democratically vote whether or not the Chicken should be slaughtered. They have several options. They can (1) watch the slaughter as recorded on film, (2) listen to the ban on animal slaughter in public places, (3) listen to a witness talking about the original slaughter, and (4) slaughter. When, at the premiere, slaughter was voted for, the conditions of the Event were re-established. “If you have voted for slaughter, we call on a member of the audience who has voted for this, to come on stage and perform it.” The responsibility of the gaze! What followed was painful to wait for and—to be honest—democracy has upset the Chicken too. In those painful moments, I could not help thinking: “Well, well, the Chicken is watching us…” Immediately afterwards, I was overcome by a thought: “Mother Chicken! Is it possible to have a more genuine experience of (Slovene) democracy?”

Rok Vevar (1973, Slovenj Gradec, Slovenia) works and lives in Ljubljana. He studied Comparative Literature at the Faculty of Arts and theatre directing at the Academy for Theatre, Radio, Film and TV in Ljubljana. He is a publicist/ critic for several newspapers and journals, theatre director and member of the editorial board of Maska magazine (1999 – 2006). He has worked on various projects as a dramaturg (Dance Theatre Ljubljana), as an Assistant Director for Slovene TV (documentaries) and is co-author – with Simona Semenič – of three theatre and dance pieces: A Fistful of Empty Hands (2001), Solo No Peak(2003), Cartography of a Feature-length Slide Show (2005). 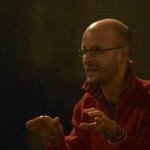 [1] Rok Vevar (1973, Slovenj Gradec, Slovenia) works and lives in Ljubljana. He studied Comparative Literature at the Faculty of Arts and theatre directing at the Academy for Theatre, Radio, Film and TV in Ljubljana. He is a publicist/ critic for several newspapers and journals, theatre director and member of the editorial board of Maska magazine (1999 – 2006). He has worked on various projects as a dramaturg (Dance Theatre Ljubljana), as an Assistant Director for Slovene TV (documentaries) and is co-author – with Simona Semenič – of three theatre and dance pieces: A Fistful of Empty Hands (2001), Solo No Peak(2003), Cartography of a Feature-length Slide Show (2005).