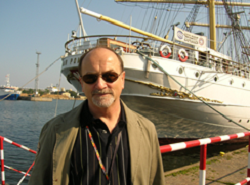 Yael Ronen, the young Israeli playwright and director (born 1976), has discovered her own way of political theatre. She uses actors from different nationalities to highlight, embody and try to solve conflicts, which have long plagued the interrelationship between the countries of origin of these actors. Thus in Dritte Generation the actors come from Germany and Israel.

Yael Ronen belongs to the second generation born in independent Israel and to the third generation after the holocaust. This background is a starting-point of her quest. Her early dramas Guide to a Good Life (2003), Plonter (2005, in Cameri Theatre) and Spells (2007), met with approval both in Israel and abroad. Plonter was the first important step in her search for a new way of political drama, which could adequately present the difficulty of today’s problems.

It took eight months to produce Plonter. During that time young Israeli actors – five Jews and four Arabs – not only researched history, but also visited Palestinian cities, Jewish settlements and checkpoints. The actors distributed questionnaires on the Jewish-Palestinian conflict, first among families and friends, then more widely. Palestinian and Israeli sources gave different interpretations of history, but all in all, Ronen says, the group found out things “not taught us in school.”

Plonter is not one well-made play with beginning and end. It is rather a collection of scenes illustrating daily life in a divided Israel, particularly in the so-called territories. What we see on stage is often associated with personal experiences of the actors. Yoav Levy, for example, a Jewish actor, did his military service in the territories. Now he plays an Israeli soldier, who shoots a Palestinian in the back. One evening several soldiers from Yoav Levy’s former unit came to see the show, and they watched in total silence. But after the show Yoav Levy saw them “troubled and weeping.”

Plonter was a perfect hit in its time. Simultaneously, the Israeli government was isolating Gaza with a wall, and the theatrical production participated in the national debate about the future of Israel. The 165 seats of the Cameri Theatre in Tel Aviv were sold out for months; soldiers, schoolchildren filled the auditorium. Of course, the theatre cannot and did not want to offer a miraculous solution to the conflict, but nevertheless, Plonter was a brave performance with an intention to change the history of violence in Israel. It would be naïve to expect that one performance, even a good one such as this, could change the world, but it did change the life of Yael, who found herself a husband in one of the Palestinian actors.

At the end of the show a big video screen shows actors walking around the edge of the wall separating Israel and the Gaza strip. They tread like acrobats, balancing the body so as not to fall. This is no easy walk. Symbolically it shows how the long-standing conflict could be lead to reconciliation, step-by-step, taken together and cautiously.

The next step of Yael Ronen was a Polish-Israeli co-production. Yael Ronen and Michał Zadara from Poland worked with Israeli and Polish actors. The directors wrote a play each titled Bat-Yam-Tykocin Express (2008) about difficult Polish-Jewish relations and post-war trauma, described from the Polish and Jewish points of view respectively. The Polish director worked with Israeli actors in Tel Aviv and the Jewish director worked with Polish actors in Wroclaw. The parallel performances were shown both separately and as a double bill in these two cities.

The same theme is the starting point of Dritte Generation. The performance shows a meeting of actors from Germany and Israel. In short monologues and dialogues it presents German-Jewish relations after the trauma of the holocaust and the entire catalogue of contemporary trauma. In truth, this is not a meeting between two parties, but at least four, because on the one hand there are western and post-eastern Germans, on the other, Jews and Palestinians, and if you remember an Israeli saying that where two Jews meet, there are four parties present, consequently in a production with nine participants the number of possible “parties” can be even more.

Despite the gravity of the issues raised and their weight, Ronen is far from being boring or sublime. The debate goes on as a rushing stream, inlaid with funny situations and dramatic turns. This production raises the level of political debate to a new standard.

The method Ronen has used all along her career is to analyze the Gordian knot in the relations between nations, this time Jews, Palestinians and Germans. In doing this she has been very consequent: in Plonter Jews and Palestinians, in Bat-Yan Tykocin Poles and Jews. In Dritte Generation, in the words of the director, “the actors’ family backgrounds vary very much” just as in her previous productions. That is why their discussions and confrontations are so authentic.

Dritte Generation is a conversational play where the heroes or participants of the discussion talk about their situation in the modern world, at times very sharply and aggressively. They ask what makes us perpetrators or victims, but the fundamental question is about our personal identity and its connection with national mythology.

I wonder what will be the next step for Ronen. The formula of the Gordian knot seems to have been exhausted. 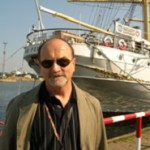 [1] Tomasz Miłkowski (1947, Warsaw, Poland) is Ph.D. in Polish philology, at the University of Warsaw, journalist, literary and theatrical critic, author of several books, essays, and reviews. He is also Editor-in-chief of the Internet theatrical quarterly Yorick (www.aict.art.pl).