Armenia was the first country to officially adopt Christianity as a state religion. As a result, religion has always been a significant influence in Armenian theatre. Even today, theatre and religion are closely intertwined. Numerous plays deal with religious subjects including Armenian religious history as a whole. Even productions of classic plays often have a religious aspect to them.

Music too plays a major role in Armenian theatre and producers wishing to attract local audiences tend to include music in their productions. On the more spectacular side is Armenian ballet and opera, heavily influenced by Russian styles, but still quite Armenian in its approaches.

In fact, Armenia is a major cultural bridge between Europe and Western Asia and has been so for centuries. Indeed, theatres in Turkey, Azerbaijan, Iran and even Georgia have utilized Armenian connections in their own developing styles including influences connected to contemporary forms.

Shakespeare has, of course, been a major influence as have most of the western classics. Indeed, Shakespeare is still probably the country’s most produced playwright and there is a major festival each year—the country’s second largest festival—devoted to Shakespearean productions. More radical experiments though have yet to find an audience.

Despite such activity, theatre criticism is still only an occasional form. Newspapers carry some articles and commentary but such journalistic approaches have little real influence with audiences though actors and directors do take note of what is said.

What follows are a few words about the productions on view during the recent World Congress of the International Association of Theatre Critics in Yerevan, productions which reflect these specific issues: 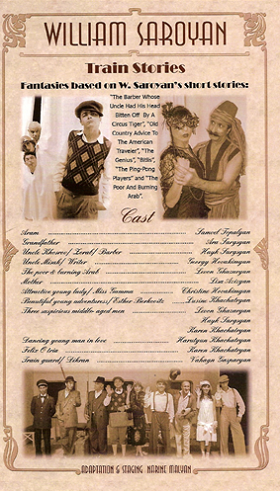 The Dogs by N. Santoyan

Performed at the Gyumri Theatre, the play is based on a folktale about a child growing into a teen and reflects issues about poverty and wealth. But rather than played as young people,     thecharacters are all portrayed as dogs, uptown and downtown dogs, whose lives were part of a make believe world. The play attracted particular interest among young audiences who also were interested in the eye-catching costumes and youthful behaviour. Performed on an almost bare stage—an unusual choice in our theatre and not one that I was impressed with—it put the total focus on the actors, not all of whom seemed up to the challenge. This is not a strong text in any event and the production did little to strengthen it.

An opera based on a popular folk tale, the protagonist is a young girl offered two different marriage proposals, one from a young man she loves; the other from someone her parents want her to marry. She is compelled to follow her parent’s choice. The production is designed well but that is perhaps the best one can say about it. It does reflect something, however, of Armenia.

In Armenia, the playwright is always the most important element in the theatrical event, even more so than the director, a clear difference between the Armenian theatre and other theatres in Europe today. Performed at the Yerevan Dramatic Theatre, this Macbeth, however, was perhaps a little too faithful to the text. Design-wise, it was an uncomfortable blend of the neo-classic and the modern yet it seemed to engage the audience more than it moved Shakespearean production forward in this country. 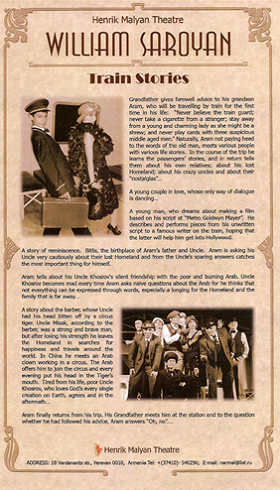 Performed by a well-known group outside the capital, this is a play that seeks to evoke symbolically the inner emotions of its single character. Filled with nightmarish visions that have their equivalents in general social issues, this is an allegory of self and family, of the individual and society. Again religion plays a major role. In performance, the actor and the audience are supposed to interpenetrate. Unfortunately, the audience numbers were too small for this to work effectively and a general awkwardness was the result. A sliding door, a large mattress, these were key design elements bringing us into the character’s mind, setting us down in an often bizarre world.

[1] Mehdi Nasiri graduated in Dramatic Literature at the University of Art & Architecture of Tehran. He is a theatre critic for theatre magazines in Tehran – Namayesh and Sahneh – and was considered one of the best theatre critics in Iran in three consecutive years: 2007, 2008 and 2009. He is currently preparing his PhD thesis about “Adaptations of historical fiction to playwriting” at the National Academy of Science of Armenia, under the supervision of Enrik-Edoyan. He is also teaching theatre at the Aazad University.

Notes on the Armenian Theatre