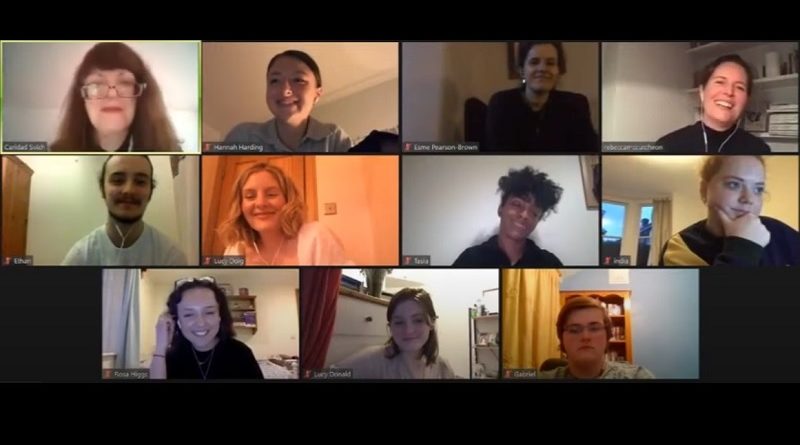 Preface: This Town is a Hall or Theatre for Communion

It started in a room in the late winter of 2016 at Ensemble Studio Theatre in New York City. Director Katie Pearl and I and four actors – Bhavesh Patel, Keira Phoenix, Christina Pumariega, and Juan Villa – gathered to read and explore my new text for performance Town Hall. We rehearsed in the afternoon for about three hours and then read/presented the piece for a small, invited audience that evening. The energy in the room was electric as we discovered in real time, together, how the piece’s questioning of the act of gathering as an act of potential healing could be made manifest.

The energy from that reading/presentation led to another, more extended mini-workshop process at The Lark in New York City in early 2017. This time the actors were Flor De Liz Perez, Karen Kandel, Rey Lucas, and Keira Phoenix (reprising the figure of A for us). Katie Pearl and I worked for three days with these actors exploring the textual layers, the role of the audience in the play and possibilities for staging and moments of choreography. At the end of the three days of exploration, we again read/presented the piece to an invited audience. This time the audience was comprised of about fifty people, unlike the trusted six that attended the EST reading in 2016. The ability to test the piece before a small crowd felt crucial, given the piece’s open-ended nature and gently provocative relationship with the audience. If every theatre gathering is a communion and a town hall, how is this Town Hall both the re-inscription of what theatre can do at its essence, but also point toward a different kind of relationship with the halls of theatre and society?

Screenshots of the virtual reading at Royal Holloway, University of London, June 2020

Town Hall was conceived as the first in a trio of plays I call the “citizenship trilogy.” The other plays that comprise the trilogy are An Acorn (commissioned by American Blues Theater in 2017, first staged at Brown University/Trinity Rep’s Theatre Department in 2018, and subsequently staged at Georgetown University in 2020 and digitally with Impel Theatre in Toronto and Oldham Coliseum Theatre in England in 2021), and Theatre: a love story (first seen at Know Theatre in Cincinnati as a transmedia theatre production in 2021, and published in Yale’s THEATER magazine in its third issue of 2021). What unites all these plays are an open dramatic structure, a careful and gentle approach to storytelling, and a desire to reassemble from the shards of Western society’s late capitalist systems of obstruction and oppression, a more liberating and liberated theatre. Unlike the other two plays in the trilogy, Town Hall ultimately focuses on the geopolitical relationship of survivors to and of the aftermath of domestic terrorism and its targeted acts of violence while it simultaneously centers on the role of the individual in the Capitalocene (to use scholar Jason Moore’s term) and Anthropocene. All three plays are what may be called “climate era” plays, but then again, I believe that most plays written during these times are “climate era” plays just as plays written during the Industrial Revolution are works of the industrial revolution. You cannot divorce the work from the context from which it springs, even if the art-work wishes to stand outside of the frame of its time(s).

As Town Hall continued its journey of exploration, it was staged/presented in a laboratory configuration at the National Theatre Institute in Waterford, Connecticut guided by guest faculty director Erin Ortman, wherein four student directors took on different sections of the play and staged them in different rooms on the NTI campus, and in March of 2020, the piece received a production at Barnard College in New York City directed by Rachel Gita Karp a mere week before the world and theatre shut down abruptly due to the Covid-19 pandemic. Across the Atlantic Ocean, meanwhile, the piece was presented at the Camden People’s Theatre Calm Down Dear Festival in June 2019 by director Rebecca McCutcheon, and later in June 2020, as a virtual reading on YouTube after what had been initially intended as a site-responsive event at the Tate Modern in London as part of a symposium hosted by University of London, Royal Holloway on theatre and the climate emergency (link to this virtual reading and post-show discussion here).

In March of 2020, the play was set to premiere officially at Red Tape Theatre in Chicago under the direction of Elly Green, but the production was cancelled due to Covid-19. And so, the play has remained in a curious theatrical limbo ever since, living in the multiple memories of its developmental journey and the memories of volatile years in global politics (2016-2020) which accompanied it, as the specter of Brexit became a reality, the Trump years in the US allowed for the rise of far-right fascism, the overall rise of far-right fascism around the world, and even more devastation ecologically due to the climate emergency.

The play meets you now on these pages, returning to its initial engagement with the imagined space of theatre and the town halls that may thrive within and outside of it if the vulnerable potential of theatre is given time to find its light.

*Caridad Svich is a playwright-poet, translator, screenwriter, songwriter, editor, educator and artivist. She received the 2012 OBIE for Lifetime Achievement and 2018 Ellen Stewart Career Achievement Award in Professional Theatre from ATHE. She will be inducted into the 2023 College of Fellows of American Theatre and is newly appointed C0-Artistic Director of New Works at the Lucille Lortel Theatre. Her plays include 12 Ophelias, Iphigenia Crash Land Falls…, Red Bike, and The House of the Spirits (based on Isabel Allende’s novel). She has edited or authored several books on theatre, among them Toward a Future Theatre (Methuen Drama, 2022).