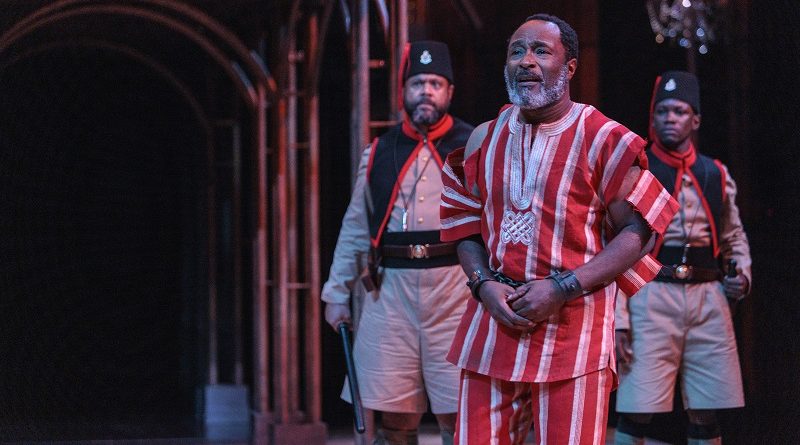 There’s a spectacular new theatre at Canada’s Stratford Festival—the Tom Patterson, named after the Festival’s businessman founder. Built at a cost of over $70 million and located along the banks of the town’s Avon River, the new theatre replaces a former hockey rink that had been used as a third or fourth stage at Stratford for many years. Still boasting a rink-like, three-sided design, the new Tom Patterson seems intended for the unusual which is, this season and very significantly, the 1975 African classic Death and the King’s Horseman, a play long-considered Nigerian dramatist Wole Soyinka’s masterpiece, Stratford’s first African play and an exciting indicator of the inclusive programming that will continue to enrich this once Shakespeare-only Festival.

Built around the death of a Yoruba king and the traditional requirement that his horseman follow him into the land of the ancestors via ritual suicide, Soyinka based the play on a real incident in which culturally deaf colonials decided they would save the horseman’s life, thereby disrupting an entire society. The King’s horseman of Soyinka’s play procrastinates his sacred responsibility with such bravado that destruction inevitably engulfs him.

Elesin—the King’s horseman (vigorously played by Anthony Santiago) first enters in a swirl of drummers and praise-singers. Indeed, music and dance are essential to this (and most) Soyinka plays with the voice of the drum speaking the deepest language. At the play’s throbbing metaphysical heart lies a journey that characterizes essential Yoruba cosmology—the tripartite essence of the world, which includes those who have passed on (the ancestors), those who now live in the world and those still waiting to be born. Stratford’s large, talented and multi-faceted artistic team—led by a Ghanaian-Canadian director Tawiah M’Carthy and including several Nigerian-Canadians—meets the many complex staging and story challenges, while serving Soyinka’s multiple thematic aims, his charged writing and cultural specificity.

The Horseman of the title—Elesin—is obviously crucial to the meaning of the play as well as to the success of any production. Scholar George Elliott Clarke aptly calls him a “down-to-earth Dionysus,” a sex symbol and a fertility fetish, “one whose tongue has slurped all honey and whose belly has indulged all feasting. His essence is carnality.” Elesin savours all the “smells of flesh sweat and indigo.” Soyinka’s richly expansive poetry bristles with physical life, flora, fauna, even weather. Non-African audiences may struggle at first with such thickly resonant language, but it releases its mysteries as the story progresses, its meanings fully embodied in the continuous music and movement.

Iyaloja—the honoured Mother of the Market (regally realized by Akosua Amo-Adem)—enters, her shimmering light illuminating Elesin. The chief Praise-Singer, played with force and exuberance by Amaka Umeh (also portraying Hamlet at Stratford this season), engages Elesin in the riddling “Not-I” sequence, an ode disdaining the fear of death and extolling the virtue of honour. To the rhythms of drums and poetry acclaiming Elesin’s ravenous embrace of life along with his bravura assistance that he be attired like the royal saviour he is, Iyaloja and her women begin the joyful task of robing him.

Adept at delaying his fate, Elesin spots a young beauty in the market and covets one more earthly pleasure, asking Iyaloja if he can have her, marry her, though his own death is imminent. Reluctantly she grants his wish: “The best is yours. We know you for a man of honour.”  Ceremonial regalia now includes wedding finery, Iyaloja acknowledging that her hands must prepare both the bridal chamber and Elesin’s shroud.

At the colonial level of the play, dancing continues in the form of a white couple practicing tango to a vinyl record on the balcony of the British District Officer’s residence. Simon Pilkings and his wife Jane (yes, a Tarzan joke) present initially as one-dimensional stereotypes of imperial order. Even the music of their merriment is a European import mocking the rhythm of the drums—now intensifying. These two, costumed for a fancy dress ball in what are traditional ceremonial death outfits inspire both Soyinka’s disdain and some fine theatrical comedy. Cultural complications boil up as the playwright moves in with minor characters who straddle both sides of the divide. Soyinka’s irony is profound, exposing tensions, both personal and official, between “inferior” and “superior,” between British and African, “them” and “us,” between tradition and modernity, between animism and Christianity. All rankle deeply.

But the real story is back in the market with Elesin. Now sexually sated from his own sweet coital victory and convinced he has produced an heir to succeed him, he launches into the poetry of regeneration and new birth, “The heart of life, this hive which contains the swarm of the world in its small compass.”

Finally prepared to cross over, Elesin begins a stately dance of death, led by Iyaloja and the Praise-Singer. He enters the next world in a trance, with the sonorous strains of a dirge sung by the Praise-Singer’s voice that seems to issue from Elesin’s dead father. This meta-nod to Hamlet is entirely appropriate, given Elesin’s constant procrastination. At last, he sinks below the stage into clouds of vapour and white dazzling light.

Cut to strains of Rule Britannia at the masked ball in the British Residency. White couples titillate themselves with adaptations they have made of African costumes. Harsh, ironic, comic and cruel, such juxtapositions pack this charged play, powering it fatefully forward.

Closing scenes are harrowing. We hear wailing protestations: “White man. Take your hand from my body . . . give me back the name you have taken from me, you ghost from the land of the nameless.” Elesin? Yes, at the last moment, he has been “saved,” then arrested and, finally, thrown into a former holding pen for slaves hidden in the bowels of the British Residence. His shamed son Olunde confronts him through the skeletal shadows of prison bars, devastated. All is broken, the Yoruba world shattered. Unable to bear his father’s shame, Olunde leaves.

Iyaloja swoops in like an avenging angel berating Elesin for his many delays, for not fulfilling his sacred responsibility to the people. He has betrayed everyone. Elesin is inconsolable and Iyaloja unrelenting. Moreover, she is about to add another burden to his sorrow. The market women enter, bearing a corpse revealed to be Olunde. His suicide will not make the world right because the child cannot die for the father. Waves of mournful music and the weighted words of the Praise Singer and Iyoloja crashing around him, Elesin also slips out of life in a tragic compromise with destiny. His widowed bride, she who carries the future inside her, silently approaches her dead husband and covers his eyes with earth.

A play of profound vision and integrity that fulfills Soyinka’s commitment to the authenticity of one’s self and one’s culture along with the recognition that cultures are dynamic and change is inevitable, this Stratford production of Death and the King’s Horseman is fully realized and deserves tremendous credit for bringing Africa into the Festival’s focus as part of the wider world we all inhabit.

*Patricia Keeney is an award-winning theatre and literary critic based in Canada. Author of three novels including one about the acclaimed Ugandan theatre company Abafumi: One Man Dancing, she has also published a dozen books of poetry. Keeney is a longtime professor of Literature, Humanities and Creative Writing at Toronto’s York University. Website: wapitiwords.ca.