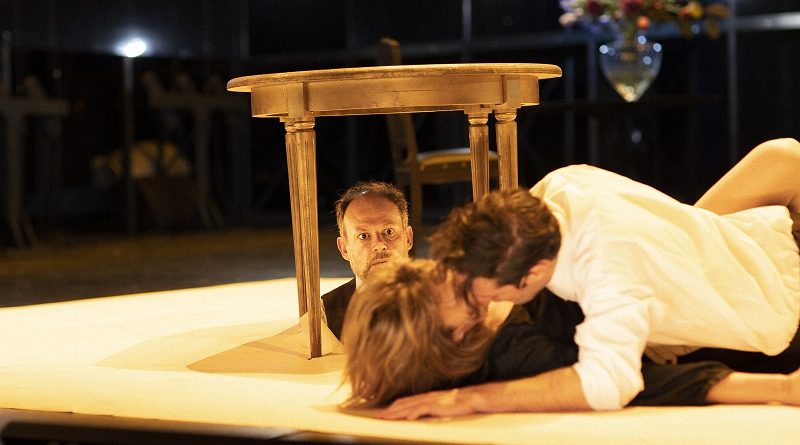 Without question, the production Le Tartuffe ou L’hypocrite (Tartuffe, or The Hypocrite) is one of the biggest theatrical events of 2022 on a European and global scale. The show was especially planned by the Comédie-Française to celebrate the 400th anniversary of Molière (1622–73). Its premiere on the first French stage (often named “the home of Molière” during past centuries) fell on 15 January, the birthday of the dramatist, and was accompanied by live screenings in cinemas all over the country. The production’s aim for a spectacular anniversary is undoubtedly an important reason for its success, but an even more significant reason is Ivo van Hove’s surprising, profoundly topical reading of the iconic comedy.

The biggest surprise of the performance is that Ivo van Hove has used the first original version of the comedy by Molière, in three acts, entitled Le Tartuffe ou L’hypocrite, performed in public just once on 12 May 1664 at Versailles. Although Louis XIV liked the wit and ridicule of hypocritical piety in the play by his favorite playwright, he forbade it on the advice of the archbishop of Paris. Molière reworked his comedy into five acts and retitled it Le Tartuffe ou L’imposteur (Tartuffe, or The Impostor). In 1669, this modified version was approved by the king and after its gloriously successful premiere at the Palais-Royal became the most common version of the comedy.

The first original version of Tartuffe, which Ivo van Hove and the Comédie-Française troupe chose to perform 358 years after its writing, was especially restored in the process of a long literary and theatrical study by George Forestier, the great scholar and biographer of Molière (with the help of Isabelle Grelet). The second and fifth acts from the 1669 version are left out in this production. In the new fifth act, the king would intervene and bring justice back by punishing Tartuffe and saving Orgon’s family from losing their wealth. Likewise, Orgon’s daughter Mariane and her beloved Valère are also not present, as their functions in the plot are fused into the image of Orgon’s son Damis (this is directly communicated by the director in his added final scene, in which Julien Frison complements Damis’ costume with a blue dress).

Ivo van Hove is hugely inspired by the more direct, condensed and raw three act original of Tartuffe. Famous for his daring and unusual interpretations of classical texts (just think of Roman Tragedies after Shakespeare or Electra/Orestes after Euripides), the director offers an extremely discerning reading of Molière’s play. In his view, in today’s world of manipulation, hybrid war and fake news, pretense and hypocrisy, from personal behavior to social policies and interstate relations, the play becomes painfully topical. Ivo van Hove examines perhaps the most important question of our times: the crisis and falling apart of the family unit, both as a basis and an allusion to traditional European society, as well as to its possible transformation and return, on a new level, to the basic values from which it has distanced itself.

The director is clear that the reasons for both the family crisis and the social one are external as well as internal. In his witty and perceptive reading of Molière’s Tartuffe, there is an external intruder, a stranger, who applies all means of hypocrisy and unscrupulous fraud in order to ruin the family of the hospitable Orgon and personally benefit from his wealth and social status. Unexpectedly, he also acts as strong dramatic litmus for the internal family problems and the long-eroded relations in this family, automatically taken for granted.

In order to stage his reading, Ivo van Hove divides the play into fourteen short episodes, the first and the last added by him and not present in Molière’s text. The added scenes are wordless, but they reflect the clearly outlined and highly effective conceptual framework of the production. It is structured as an open debate: in each successive scene the characters face each other and passionately show, support and defend their ideas about the world, their identity and their goals. The feeling of a constructed story, a play, which makes you reflect and read its meanings and conclusions, is constantly present. The scenography by Jan Versweyveld, the constant collaborator of Ivo van Hove, contributes enormously to the creation of this cold, rationally clear yet deeply and emotionally effective discussion format.

The stage is empty except for wide black stairs, which the characters descend “on the carpet” to conduct their outwardly restrained and inwardly desperately tense verbal battles, culminating at times in physical confrontation. Each episode begins with a caption projected onto the proscenium asking its main question or topic, such as “Who was that person?” “Who is setting a trap for whom?” “After nine months.”

It opens with a darkened stage, on which the audience can barely see the silhouette of a passing man. All of a sudden, a huge formless pile moves at his feet to reveal a homeless person. An anxious cry, “Mother, come!” is heard and the stage is bathed in a bright light . . . The spectators see Orgon, who on encountering the fallen tramp Tartuffe, guided by his upbringing in piety and compassion for his fellow man, takes Tartuffe home. Particularly fascinating is the next part of the same episode, introduced by the director, in which Orgon, Mme. Pernelle and several servants bathe, dry and dress the stranger in their usual elegant clothes, turning him into one of them; the entire action of the comedy is transferred to the present day, and the actors are in strict modern suits.

Fundamental for the production’s whole development is also scene two, in which four servants unfurl a large white sheet of paper on the floor, upon which Mme Pernelle first descends and declares her displeasure at the new, free manners of her son’s household. Upon the same huge white sheet of paper, in the following episodes, all the dramatic battles take place—all debates between the characters and Tartuffe, methodically destroying the relationships between the family members and taking over Orgon’s space. We arrive at the famous climactic farcical scene where, hidden under the table, Orgon observes the struggle for erotic supremacy between his wife Elmire and his favorite. Realizing at last his blindness, he stands up from the floor and literally tears apart with his head the paper carpet on which by then his story is being written and his family’s battles are being fought.

Thus, to reveal the complex interplay of external threat and internal causes in the modern crisis of family and society, as well as a possible way out of it, Ivo van Hove gives his performance two main emphases. The first is on the gap between the old traditional order, hypocritically holding to its quality and immutability, and the young, who seek freedom, true feelings and relationships. The other is on the power struggle between Elmire and Tartuffe which, according to Ivo van Hove and the Comédie-Française troupe, grows into love. Hence, in the bright and daring jubilee performance, the true problem of our modern world turns out to be the ubiquitous global lack of sincerity and true love (in all its forms and manifestations), and the solution is to call them back to people.

*Kamelia Nikolova (PhD, DSc) is a theatre researcher, historian and theatre critic. She is Professor of European Theatre and Head of the Theatre Studies Programme at the National Academy for Theatre and Film Arts, Sofia, Bulgaria. She is also Research Fellow at the Theatre Department of the Institute of Art Studies, Bulgarian Academy of Sciences and a visiting professor at other universities. Her research and teaching interests are history of theatre, theory of drama and performance and new theatre practices. The list of her publications includes eleven books and many articles in Bulgarian and international journals.