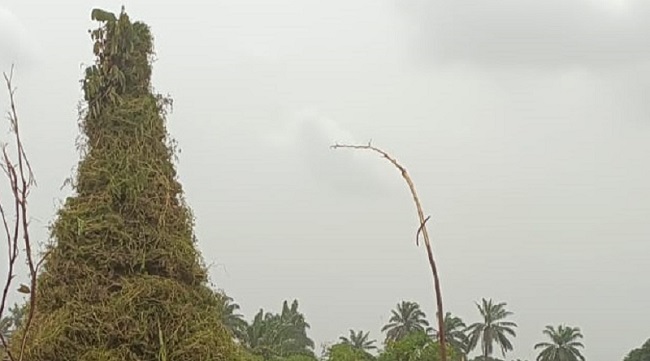 Nigeria’s traditional festivals are fascinating annual or biennial events where community members celebrate aspects of their age-long culture with enthralling activities and due reverence. These are great moments, when communities display the best of their intangible cultural heritage through arts and performances. The belief and value systems that sustained these events have shifted in response to forces of modernity, technology, globalisation and new ways of doing things. However, despite the disappearance of many ancient festivals, some have survived. Among them is the Uzo-iyi Masquerade Festival of Umuoji in Anambra State, South-Eastern Nigeria.

Since 2016, we have been attending some of these festivals to determine the changes that have occurred, the factors responsible for the changes, and the implications of such changes. One of the festivals selected is the Uzo-iyi. We find that the Uzo-iyi has not only survived but has advanced, becoming more significant and innovative and doggedly maintaining its tourist appeal. We will describe this annual event and how it has survived the forces of modernity.

Every year, apart from the three years of the Nigeria-Biafra civil war (1967–70), the Uzo-iyi Festival has not ceased for centuries to mesmerise diverse audiences with its extensive assortment of masked performers. The masquerade characters represent large land and sea animals, exquisitely designed and colourfully adorned. These animal characters include Eagle (Ugo), Camel (Nnyakwulu), Crocodile (Obammili), Elephant (Enyi), a prototype of a hunting expedition (Egbenu oba), Horse (Inyinya), Giraffe (Ochammili), a mystical/hybrid Leopard (Aja-gba-agu-mgba) and others, each produced by one of the twenty-three villages that make up Umuoji. The biggest piece is Ijele (see photo above), with a height of twelve to fifteen feet: it takes about a hundred men to design. (The idea of men constructing the skeletal image comes from a cultural standpoint and gender roles. The masquerade cult is essentially male-dominated, and only men can participate in that aspect of the ceremony.) It is believed to be the biggest masquerade in sub-Saharan Africa. Ijele masquerade was inscribed in UNESCO’s Representative List of Intangible Cultural Heritage of Humanity in 2009.

There is always a commotion among the spectators when Ijele is announced during the parade. Nobody wants to miss seeing this graceful, magnificently colourful and large masquerade; thus, spectators cause much commotion to get a fuller shot of it with their digital cameras and phones.

The performances’ wonderful aesthetics often overshadow the festival’s historical and religious aspects. This is because the festival can be described as both sacred and secular. The spiritual part of the festival starts on the Friday preceding the festival. The Otu Dibia (traditional medicine men) perform the sacred rituals at the Ideakpulu River, and only the initiates participate in this aspect of the festival.

Through some archaeological findings, researchers estimate the age of this festival to be over six centuries. At its inception, the festival was performed in reverence and thanksgiving to Idemili, the river goddess. Being an agrarian community at the time, the Umuoji people needed to solicit the deity for adequate rainfall to ensure healthy crops and a bounteous harvest. This explains why the festival is held annually at the beginning of the rainy season, in March, to kick off the planting season. It lasts four days and ends with a spectacular, epic parade of many colourful, gigantic masquerades. The day of the main event must be the last Afor (the third of the four days that make up a week in the Igbo calendar) and must be a Sunday. It takes place at the Umuoji Township Stadium, a large village square located a short distance from the Ideakpulu river, the home of the river goddess. Each masquerade group has ten minutes to perform, before leaving the arena for the next group. We noted that attractions other than the masquerades might over time be part of the package. For instance, in the 2022 edition, we observed a motorbike rider performing a “Donut” in the arena at the end of the regular competition.

This adds credence to the assertion that “the community has continued to redesign, modernise and celebrate the festival with greater zeal, interest and assimilation, to the extent that they even attracted the presence of the cream of society” (Okonkwo 2008). The festival had assumed a tourist proportion from the earliest time when people travelled from far places to watch this spectacular display of artistic wonder.

The masquerades are communally owned, meaning that each of the twenty-three villages that make up Umuoji produces the kind of masquerade for which it is known. Each year, the number of masquerades varies, ranging up to a hundred. It is not yet ascertained what determines the type of masquerade a village produces. Some of these masquerades are fielded for competition outside the community and the state. Hence masquerades from Umuoji were reported to have won the first and second positions at the 2006 and 2007 National Cultural Carnival in Abuja. Every year, each group adds new innovations in their design and performance.

The momentous day starts with the masquerade known in Anambra State as Onyekulufa (“who called them?”). Its appearance indicates that the event is about to begin, and people who are not yet at the venue should hurry so as not to miss any performances. Waiting at the venue is a large crowd of people who have travelled from distant parts of the state and outside the country to witness the event. There is usually a special seating arrangement for the judges and dignitaries. Leading the procession and arriving well ahead of other masquerades is the one called Eze Muo (chief priest). As explained by our informant, Eze Muo comes to ward off evil spirits to make the venue safe and to welcome the special guests—governors, ministers, monarchs and other dignitaries. After that, the masquerade groups arrive at the stadium from their villages carrying their village banners, bearing the name and image of their masquerade. As they are called on the microphone, they dance into the arena with their masquerades and dancers, acrobats, and whatever else they have prepared for the occasion. Prizes are awarded at the end, and the winning team dances home, followed by a throng of admirers. For the 2022 edition of the competition, the Ijele masqueradeof Umuobia village won the first position.

A Selection of Videos of Uzo-iyi Festival

Igekwu, Jacinta U. “Cultural Tourism and its Imperativeness of Achieving Sustainable Development: A Case Study of Uzo-iyi Masquerade Festival of Umuoji, Anambra State.” Research on Humanities and Social Sciences vol. 4, no. 5, 2014, pp.106–12.

Onyeneke, A O. The Dead Among the Leaving: Masquerades in Igbo Society. Holy Ghost Congregation. 1987.

Ugonna Nnabuenyi. Mmonwu: A Dramatic Tradition of the Igbo. U of Lagos P, 1984.

*Ngozi Udengwu, a Senior Lecturer in the Department of Theatre and Film Studies, University of Nigeria, Nsukka, holds a PhD in Theatre Arts from the University of Ibadan, Nigeria. She has more than thirty-six publications, including the book Contemporary Nigerian Female Playwrights: A Study in Ideology and Themes. She is a Fellow of the American Council of Learned Societies (ACLS). Her current book project is on Women in the Professional Yoruba Popular Travelling Theatre. Her special areas include Dramatic Literature and Performance Studies.

**Ikechukwu Erojikwe, PhD, is a lecturer at the Department of Theatre and Film Studies, University of Nigeria, Nsukka. He is an actor, theatre director, poet and edutainment specialist. He is recipient of two global awards: the Association of Commonwealth Universities (2020) and the Alliance for African Partnership (2021).