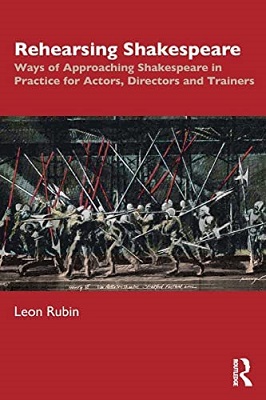 Let me say right off that I am no relation to Leon Rubin although he and I once were mistaken for one another in a Singapore hotel. He had accidentally received my daily schedule and I had received his and though they were somewhat similar they were different enough that we both realized something was amiss. We eventually agreed to meet at the hotel’s reception desk where we were bemused enough to try and find out who we actually were.

As it turned out, I was a working theatre critic and professor giving guest lectures and seeing the country’s theatre for the first time. He, on the other hand, was actually a working theatre director with credits at the Royal Shakespeare Company, the Bristol Old Vic, the Abbey Theatre and Canada’s Stratford Festival among others who was visiting local theatre schools and discussing future guest directing possibilities.

Eventually I found out that he had been directing Shakespeare’s plays quite regularly in Asia and eastern Europe – Bali, Japan, China, Korea, at GITIS in Moscow, in Romania as well as in Chile and Brazil. His home base at that time was Middlesex University and the East 15 Acting School in England. Which is to say that while many Rubins may be professionally peripatetic Leon Rubin is clearly master of the house, especially when it comes to Shakespeare.

For the record, Leon has directed 17 major productions of Shakespeare as well as plays by Marlowe, Webster and Ben Jonson. And having now seen some of his productions I can say unqualifiedly that he is not only a master of his directorial craft but he is also unique in his ability not just to bring western theatre techniques to the east but also to bring elements of eastern theatre to his productions in the west. Seeing a Leon Rubin production of Shakespeare, in other words, is usually surprising in a richly trans-national way.

No one better then to put together a volume aimed at directors who might find themselves in similar situations staging the works of the Bard in non-anglophone settings and/or with advanced theatre students. For young professional directors, this slim volume is a treasure chest of tips, techniques and insights into the challenges of working with actors generally and especially with actors on complicated text.

Divided into six clear sections (each with mini-casebooks based on his own productions), the volume covers a wide range of subjects including how to make decisions about choice of classical plays and appropriate translations, rehearsal logistics, cutting and editing of texts, preparing actors for verse, verse exercises and speaking, cultural attitudes, design issues and blocking. There is even some material slipped in on auditioning.

“The focus,” he says, right on page one, “is on exercises and approaches that can aid the acting and directing process rather than academic analysis…trying to determine when analysis is useful and informative and when gut instinct should take over and dominate.” That is,  his book is intended “to support…practical ways  of bringing … text alive with demanding work that flexes the acting muscles, intellectual and physical, when dealing with Shakespeare’s complex and challenging plays….[offering] examples of ways, conceptually and practically, that… can demystify, deconstruct, and reconstruct, in a rehearsal room, the options available to perform Shakespeare” (p. 2).

A product himself of anglophone text-based interpretation, Rubin suggests that anyone setting out to stage a play by Shakespeare must first “try to understand what we think Shakespeare himself was trying to communicate.” Admitting that interpretation itself is an imperfect science, he suggests that basic thematic understanding of any classical text is crucial to a production’s success.  He often starts his own work by asking everyone in the company to write down what they see as two or three major themes in the play. Comparing these responses and then discussing them as a group at an early rehearsal is “an especially revealing exercise” (p. 14.).

As for editing a Shakespearean text, he wisely points out that if the play is being done in translation then the translation itself must become the edited version. And one must understand further that every country has different approaches to classical work. Indeed, in some countries, Shakespeare will be seen as secular, semi-secular or even holy. Depending on which of those one is working on, the text may have to change accordingly. Which is okay with him. Indeed, “Shakespeare himself probably adapted and changed the plays according to these same elements. A performance before the monarch in one of the palaces or the Inns of Court was likely to differ from a performance for the general public”. (p. 20). In the end “all changes are debatable and controversial” but, he says, the director must be cautious about the gulf between an academic view of the text and how it needs to work for practitioners.  “Clarity of intention and narrative should help focus the process” (p. 35).

He makes an important point as well about acting approaches. With Stanislavski one works with language “that dictates, in many ways, the details of what the character is thinking and, in many cases, feeling… The emphasis is on the inner process of imagination and the senses which later find an outward expression. With Shakespeare, the text itself leads the outward expression: the actor needs often to construct backwards from language to inner feelings and thoughts….Stanislavski delves deeply into subtext and thoughts and feeling beyond text, whereas in Shakespearean verse…there is no subtext: characters tell us what they feel and think and even what they will do” (p. 45).

Rubin says he often uses Shakespeare’s Sonnets as a way into text for the actor. He first asks the actor to read the sonnet realistically with a clear sense of who is speaking and to whom (he suggests a good one here is Sonnet 138 about love being maintained through dishonesty). Then he asks the actor to read it again with a focus on line structure and rhyme followed by a detailed analysis. A final version is then done with a sense of character and emotional changes using the verse rhythms. He tells his actors to speak the words to an individual in the room rather than to the group as a whole responding to any reactions.

Working with Shakespeare in translation specifically is often an even greater challenge for a director. He reminds us that Shakespeare in French, for example, was first undertaken by Voltaire who used rhyming alexandrines. Like many translators, Voltaire was “more concerned about how it sounds and impacts in the target language…” Rubin then goes on to compare the formal Voltaire version with a much more accurate and contemporary but less classical French sounding version done in 2002 by Jean-Michel Déprats.

“For me,” says Rubin, “it is not an academic question of how accurate or not the translation is but more how the translator’s choices impacts on the actor and the choices they must make before they can inhabit language and therefore character” (p. 103).

The focus is always on language and cultural associations which impact how we all think, speak and act. Any translation of Shakespeare is a “gateway between the two cultures and defines very much how a production will evolve” (p. 104). As he says of one of his productions done in Greece, the Greek language, “with complex grammar and language always consisting of polysyllables” raises genuine challenges “as the speed of English and fast-moving iambic pentameter slows down, and the only likely solution is major cutting of text if energy is to be preserved….The key question is usually about whether to translate into verse or prose and, if verse, which verse form. The next question is concerning how ancient or not the language should be, and whether the ease of speaking in a somewhat more contemporary style should dominate over archaic language; usually it is some form of balance between the two” (pp. 105-6).

As for design, he suggests that in too many instances, a “timeless” design is sought. For Rubin, “the word ‘timeless’ is artistically dangerous because every item of set and costume belongs to a specific place and time according to its colour, texture, fabric and even the technology used to construct it. There is a big difference between ‘timeless’ and just not belonging specifically to one time and place” (p. 125).

Every element obviously makes a difference. Even fight scenes which Rubin has seen staged with puppets, shadow screens, projections, pre-recorded film, live camera feeds, dance choreography and slow motion — “all have the possibility of succeeding well” if clearly thought through and properly realized (p. 132).

A useful volume then this Rehearsing Shakespeare, a most sensible and sensitive guide for directors and actors finding themselves working in both academic and/or cross-cultural settings.

All that said, I do have one bone to pick with my friend Leon. Early on, he mentions (totally in passing) the subject of “conspiracy theories” connected to whether Shakespeare “really existed.” Superfluous to this text, this small throw-in comment nevertheless is for me worth grumbling about because it is so absolutely untrue and, with all due respect, Leon should know better then to just toss such statements around.

As an academic and working theatre critic who is also an authorship doubter, I just can’t let that pass without comment. I have myself publicly questioned for years whether the plays attributed to the writer Shakespeare could really have been created by an uneducated commoner from the provinces during an age of strict class hierarchy. And let me say here that no one in their right mind actually doubts that Shakespeare existed. No one. The plays are the proof. Someone wrote them and that someone used the name William Shakespeare. So obviously someone writing under the name William Shakespeare existed.

The question for authorship doubters is therefore not whether he existed but WHO actually used that name. That is, could the usually hyphenated name “Shake-speare” have been a pseudonym? Pseudonyms were certainly used regularly for personal protection by writers of every ilk in the 16th century. The fact is, no contemporary of the Stratford man ever linked this fellow to being a writer of any sort, no less the greatest writer who ever lived. And that’s why a growing numbers of researchers (outside of English departments) have come to doubt the traditional attribution. This is not a conspiracy. It is simply ongoing scholarship which too many theatre people and too many traditional scholars have just not taken the time to read.

My suggestion is for Shakespeare workers of every stripe to take a close look at a single book — Diana Price’s fascinating volume Shakespeare’s Unorthodox Biography. The research is all there.

*Don Rubin is Managing Editor of the IATC webjournal Critical Stages as well as its long-time Book Review editor. An emeritus professor of theatre at Toronto’s York University, he is the Series Editor of Routledge’s six-volume World Encyclopedia of Contemporary Theatre and Editor of the standard volume, Canadian Theatre History: Selected Readings (Playwrights Canada Press). A former member of the Executive Committees of both the International Association of Theatre Critics and the International Theatre Institute, he is the current President of the Shakespeare Authorship Coalition, sponsor of the website www.doubtaboutwill.org.