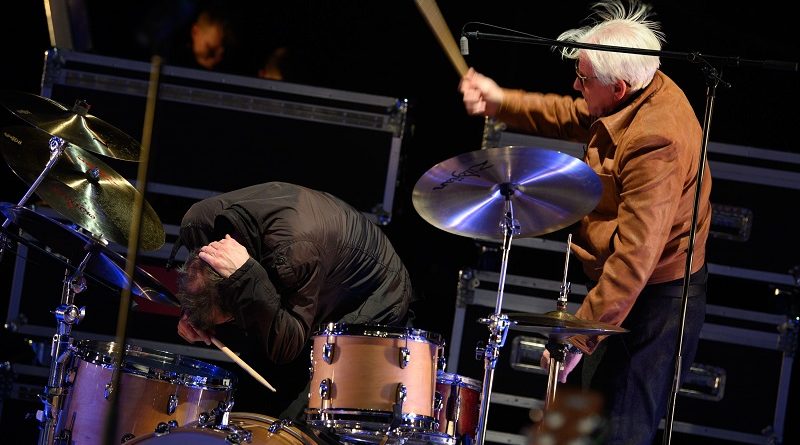 How is one to summarize an entire theatre festival and retain one’s self-respect in doing so? Have not the pandemic pause and the Russian attack exhausted one’s reservoir of experience and views?

Divadlo (Theatre) festival celebrated its 30th edition in September 2022 with the apt theme of memory. Instead of recalling its own triumphs, Divadlo chose to look back on the history of the Czech Republic, of Europe and of the globe. True crime instead of self-congratulation, so to speak. A trite summary would say that the foreign guests concentrated on personal histories, whereas Czech productions had their say about political history. Understandably, guests are booked well in advance, and one may expect their later productions to catch up with the vicious cycles of the world. And one can enjoy the subtleties of artistic creation in Robert Lepage’s way of turning his personal memoir 887 (2015) into an examination of Quebecois politics—read all about it here: “Being there in Person,” Critical Stages/Scènes critiques (critical-stages.org).

The most intriguing shows were those which do not readily offer an interpretative handle but are elusive, rather like memories or dreams. Surrounded by what might be called one-dimensional intersectional realism as I am at home, I find my critic’s tools dull in front of the Divadlo offering, which is gleefully complex.

Jan Mikulášek directed Dictionary of the Khazars for Goose on a String Theatre in Brno, Czech Republic. It is Kateřina Menclerová’s dramatization of a 1984 novel by Yugoslavian author Milorad Pavić. The novel is literally a dictionary, which traces the myths of a forgotten people in at least three interpretative traditions, namely Christian, Jewish and Islamic—needless to say, they strive to overshadow each other more than they seek to shed light on the Khazars. This means recurring episodes, repetitions and contradictions, but plot-wise next to nothing to grab you.

Mikulášek places the goings-on in a museum, where a few remaining Khazar objects are on display, only to be stolen one by one by the participants of a guided museum tour, as the actors march from the stage to the right and return from the left to yet another exhibition hall. In addition to archaeologists and historians, the devil (in disguise as a Belgian) is highly interested in snatching the Khazars’ secret for himself and thus keeping mankind ignorant of it—it may well stand for the origin of civilization. The twelve actors’ roles do have names, but they are far from psychologically rounded characters; their motivation is an obsessive quest for the ever-evasive truth. The stage is often tinted with red color, perhaps indicating that the devil is the real stage manager of our lives.

The idea of a person not being in full possession of their psychological entity, but rather being a different character from scene to scene—whether in real life or on stage—comes to me from two sources. First, from Finnish director Jouko Turkka’s book of prose Aiheita (1982), and secondly from David Barnett’s discussion of Swiss director Christoph Marthaler’s work (in Contemporary European Theatre Directors, edited by Maria M. Delgado and Dan Rebellato, 2010).

Marthaler’s Aucune idée (No Idea, 2021) is a two-man virtuoso show-(off) from Théâtre Vidy-Lausanne of Switzerland. Seemingly coincidental and fragmentary scenes follow each other on a brownish landing with several doors and a letterbox. The letterbox not only floods the floor with junk mail and Bibles but addresses the two men in an authoritative voice. God or the devil? My guess is the latter; I trust there was an intelligent design behind the festival jury’s selection.

For a moment, I believed there was a key to the performance at the end, when the men mention they are twins, but then I read in David Barnett that twins are a recurring image with Marthaler, to highlight the interchangeability of individuals. Martin Zeller plays musical instruments and Graham F. Valentine does most of the speaking. His deadpan rendering of Kurt Schwitters’ Dadaist poem Ribble Bobble Pimlico is an instant hit with the spectators, but, like everything in this production, it gets so prolonged that despair of the human condition creeps in to supersede comedy. Schwitters is also a long-time companion of Valentine and Marthaler. Dare I suggest that memory is too capricious for anyone’s consciousness to edit it at will?

A Struggle over the General, written by Tomáš Vůjtek and directed by Ivan Krejčí for Aréna Chamber Theatre in Ostrava, Czech Republic, tells the story of General Jan Šejna, a communist opportunist. The Ostrava company performs this production on a very tiny stage, accentuating the claustrophobia anyone, swindler or citizen, experiences under an oppressive regime. There is barely room for the two actors playing Šejnas to move, while the three women in his life sit on a bench behind the men’s back. A daringly bare realization relies on the strength of the material and on its delivery.

Šejna (1927–97) built himself a dazzling career in post-war Czechoslovakia and then defected during the Prague spring of 1968, when his economic wrongdoings became public. Not everything about him is known, and the playwright Vůjtek does not succumb to filling in with guesses. The result is slightly lecture-like, but what impresses me most is the show’s unabated respect towards its main character. The show declines to decide the general’s moral standing for the spectator. There may be a dose of irony in the general’s repeated but absolutely sincere declarations that the less talented envied him all through his career; instead of talent some may detect opportunism.

Memory can also serve as self-justification, as in the case of Nobel Prize winner Peter Handke’s Self-Accusation, directed by Dušan D. Pařizek for Theatre on the Balustrade from Prague. More interesting is the double bill’s latter half, Handke’s Zdeněk Adamec, about the young man who torched himself to death in Prague in 2003. Told by two actors, it is more about bewilderment: how to remember someone when so little is known about him in the first place.

A bizarre and perplexing treatment of memory came from Dlouhá Theatre in Prague. It was Daniel Majling’s drama version of Nobel Prize winner Svetlana Alexieviech’s Secondhand Time: The Last of the Soviets (2013). Michal Vajdićka’s direction recreated a Chekhovian world at the fall of the Soviet empire, and for those who failed to understand the echo, there were lines such as “you are just like Lopakhin.” An air force major’s family is suffering from marital disputes, alcohol, conflicting love interests, misguided humanism and the closing of the air force base. Pavol Andraško’s set leans toward kitsch and fills the space to the brim. I wonder whether the characters resort to reliving Chekhov in order to cope with the loss of their Soviet universe, or do the auteurs claim that the human spirit remains the same, except that it manifests itself with a more violent brutality now? The production exudes an odd charm.

Memory drifts into nostalgia in Till the Stones Come…, a production from Slovakia’s National Theatre. Daniel Majling and his actors have compiled a text about a bunch of Rolling Stones fans recruited as security for the band’s 1990 gig in Prague. Matúš Bachynec directed. Due to clashes between artistic egos and the manager’s schemes the security are talked into performing several songs from the Rolling Stones repertoire. I must be a spoilsport and compare this to Latvian director Alvis Hermanis’ 2007 production Sound of Silence, a Concert of Simon & Garfunkel 1968 in Riga that Never Took Place. In the Hermanis production, the actors did not speak. It was an all-encompassing freeze-frame of the paralyzed Soviet society, where the young and hopeful waited in vain for the embodiment of their aspirations to appear, whereas the Bratislava production looks like an excuse to perform songs so cherished by the cast.

*Matti Linnavuori wrote theatre criticism between 1978 and 2013 for various newspapers and weeklies in his native Finland. In 1985, he worked for the BBC World Service in London. Since 1998, he has presented papers at numerous IATC events. In the 2000s, he wrote for Teatra Vestnesis in Latvia. Since 1993, he has written and directed several radio plays for YLE the Finnish Broadcasting Company. His latest stage play, Ta mig till er ledare (Take Me to Your Leader, 2016), ran at Lilla Teatern in Helsinki.