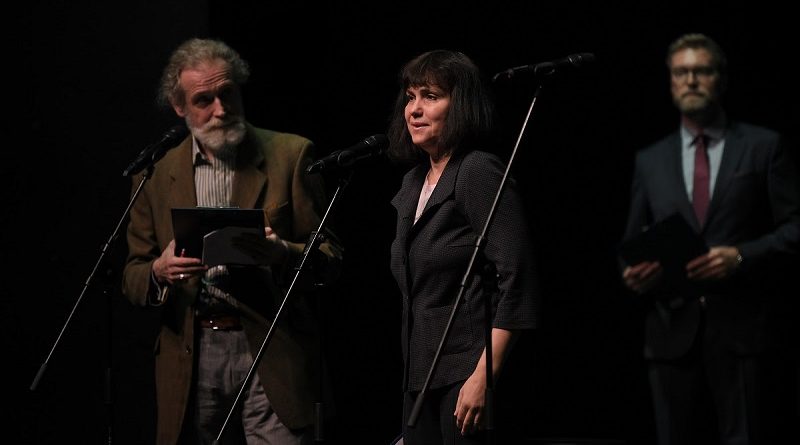 This paper, which inaugurated the 56the edition of BITEF, September 2022, explores the horrors of war through the prism of culture. I maintain that Russia, by invading Ukraine, not only attacked an independent country but also declared war against its own culture. Fascism is always a triumph of mediocrity, according to my argument, and it is precisely this so-called triumph that people in Russia are witnessing today.

I’ve been coming to BITEF since the second half of the 1990s, as I believe it is one of the most important festivals in Europe. I have always felt a special affection for Russia as a country and particularly for Russian cultural expression in a European setting. It’s probably because of this long-standing sympathy between our two countries that I often encounter in Serbia an attempt to justify the foreign policy of my homeland. For example, some people I talked to yesterday on the streets of your city exclaimed, “Are you from Russia? Putin is like a brother to us.”

I am told that in Serbia the practice of politics is a cynical business. How many unrighteous wars in recent history have been started by the USA, a bulwark of democracy? Remember the bombs that fell on Belgrade? Did Russia drop them? Russia stands up for its interests today. Serbia is with you!

I very much appreciate the love of the Serbian people for my country, but I want you to try to hear the collective voices of those millions of Russians who disagree with the current war, and try to understand why a true love for Russia is incompatible with supporting its actions in Ukraine.

All of us in this auditorium are part of a world that is defined by cultural rather than political priorities.  Therefore, I suggest that in order to avoid demagoguery and oversimplification, both of which preclude clear understanding, we shift our attention from geopolitical conflicts and instead examine the current war in Europe through the prism of culture. More precisely, we need to explore the very heart Russian culture, as some blame Russian culture for the current military conflict, while others naively equate Russian culture with Russian nationalistic identity. It is crucial to understand that on February 24, Russia not only attacked Ukraine but also declared war on its own culture.

Historically, the Russian state has embodied the hybrid form of a centaur: its political system resembles that of Asian despotism, but its highest achievements in culture and art have always been positioned toward the West. Even after the Bolshevik Revolution took away the political freedoms of its citizens, a Europeanized form of Russian culture was embodied in the leftist avant-garde which existed within European trends and both defined and anticipated them. Let us remember Meyerhold and Malevich as well as the analogue of Dadaism and a predecessor of European theatre of the absurd, the literary association of the OBERIU and its brilliant representatives, such as Daniil Kharms and Alexander Vvedensky.

The first person to erase this distinction between politics and culture was Stalin. In the late 1920s, he not only began to systematically destroy the entire avant-garde trend in culture, but he also cut off Russian culture from the Western world and plunged it into provincial archaicism. By the time he died in 1953, everything alive in Russian culture had been destroyed: the Meyerhold Theatre, Alexander Tairov’s Kamerny Theatre, Solomon Mikhoels’s Jewish Theatre, the outstanding Russian Absurdism. Russian culture had become a scorched desert.

Now, history has repeated itself. Politically, over the past two decades, Russia has moved toward a typical Asian despotism, but in the arts and humanities it has remained deeply integrated in European culture, just as it was during the Soviet avant-garde years after the Revolution.

Until February 24, 2022, I would consider Moscow as one of the most important cultural European capitals, with more noteworthy premieres, exhibitions, concerts, and international festivals than almost any other city in the world.

After February 24, however, we can observe a cultural change within Russia that is comparable to that which took place under Stalin, but in the present case, it is transforming even more rapidly than it did under Stalin.

The number of directors, stage designers, and playwrights who have left Russia is enormous. All important institutions of contemporary art and contemporary theatre have de facto disappeared. The modern Russian culture that we so admire is once again being destroyed before our eyes.  Sometimes it seems that the war was started, not to win on the front lines, but rather to gain revenge for those who did not want to live in an open world.

Until February 24th it was impossible to declare cultural ties with the West as illegal. No matter how severely political freedom was suppressed in Russia, connections with the West in the fields of art, science, and education were considered normal and even useful.

Now, anyone who looks toward the West is readily declared a traitor and they will lose their theatre, exhibition hall, university chair, ability to give concerts, etc. And even if the Russian state is far from victorious in the war with Ukraine, conservative entities have won a victory inside the country. In fact, Stalin’s cultural conservative revolution followed the same pattern. It, too, was a victory of mediocrities; they ruled, and any extraordinary person became their victim with one hundred percent probability. To survive, one either had to go deep underground or literally cease to be oneself. Fascism is always a triumph of mediocrity, and it is precisely this triumph that we are witnessing today in Russia.

In other words, we are presently witnessing the destruction of not one but two countries. In one, Ukraine, the infrastructure is consistently and brutally being destroyed and people die; in the other, Russia, what I would call a cultural catastrophe is taking place: art, science, education, media, social welfare institutions, and other cultural structures are being destroyed before our eyes.

When you claim to support the war that Russia is waging because you love Russian culture, remember that culture is one of the most severely injured victims of this war. I express my deepest sorrow for all its innocent victims, and I demand that it be stopped immediately.

*Marina Davydova is a theatre critic, theatre director, playwright and producer. She graduated cum laude from the department of theatre criticism of the Russian Academy of Theatre Art (GITIS/ RATI) in 1988.  She is the author of the monographs The End of Theatre Epoch (2005) and Culture ZERO (2017). She is also the author and editor of the book The History of West European Theatre since Renaissance Time until the End of the XIX century (the chapter Renaissance Theatre). For many years she was theatre reviewer of the oldest Russian newspaper, Izvestia. Presently, she is the editor-in-chief of the journal TEATR, an artistic-director of the NET- festival in Moscow, and columnist at Colta.ru. She is currently working on a play Land of No Return for the Munich Residenztheater and a project, “The Museum of Uncounted Voices” for HAU, Berlin.