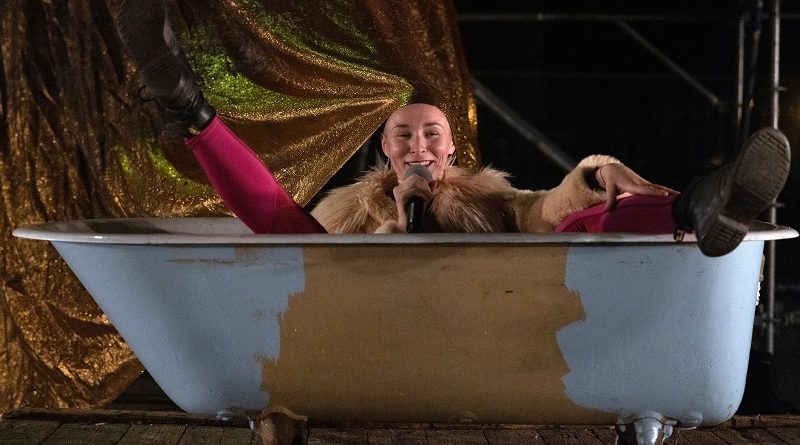 The 56th edition of BITEF (Belgrade International Theatre Festival) under the slogan “We—the heroes of our own labour” treats the topic of labour in the contemporary world. Solo, a mind and body blowing performance by Nina Rajić Kranjac (both director and protagonist) deals with the condition of the artist, more precisely of the female director in the Slovenian theatre; it also touches on many important social themes relating particularly to the cultural heritage of Ex-Yugoslavia. Moreover, through an act of intimate and public demystification of the author itself, this performance unwraps the condition of a human being, showing its personal vulnerability and responsibility not only towards others, but towards itself: Am I truly alive?

The night I saw Solo, the performance lasted more than 4 hours (3 and a half hours in the programme). I wished it had never been over! If I could only stay in that courtyard where the last part was taking place, comfortably seated by the fire, eating ćevapći, drinking beer, watching the performers moving and talking among us, almost as friends, listening to the live violin and accordion in the background, sensing myself as a part of a feeling and thinking crowd, nurtured and alive. I guess this is what they wanted us to be. Alive.

But let me start from the beginning! Or better, from the spot where this magic was taking place. For two editions of BITEF already (skipping COVID years), a part of the festival program has been located in the area of Belgrade’s Port (Luka Beograd), among its huge and vacant industrial halls and canals. The long walk through this spectral landscape, from the gate to the entrance of the “theatre,” inevitably affects the spectator. Nina Rajić Kranjac was smart enough not to miss that moment: she starts her performance right there, creating for us at the entrance a ritual of burning incense for purification, borrowed from the ecclesiastical tradition, making the ostranenie (Verfremdung) even bigger.

To be honest, I didn’t understand well what they were saying. In fact, they were saying many strange things, mostly ironically, and also evoking missing people and spirits. I simply enjoyed the materiality of this magical act, sensing that some incredible things were going to happen soon. I let myself be transported by the smells, following a man in a pink panther costume leading the crowd across the colossal building, then upstairs where a kind of rite of passage with fans and feathers happened and then to the relatively small, improvised auditorium where the “real theatre” started.

In the next few hours, we became witnesses of an explosion of memories, pain, destruction, desperation, self-parody, demystification of success, of social responsibility . . . There was a broken mirror in front of us, metaphorically speaking, and the pieces were cutting everyone. Actually, a big mirror was being carried through the space, just to reflect the messy stage dynamic that was taking place in front of us, often accompanied by insupportably high-volume music, as to give a final kick to our resistance to plunge into the chaos of human existence.

Although Nina Rajić Kranjac, tiny and seemingly a sweet and cute blonde, started her first scene by evoking funny early childhood memories in the neighbourhood of her grannie in Serbia, there was nothing funny or polite about this girl. With the participation of three other actors (Nataša Keser, Benjamin Krnetić, Marko Mandić), she developed stories where we are literally hit by her attitude, her challenging stubbornness and the uncompromising force of her personality. A woman with guts, a human being with guts!

In a scene where Nina, shouting in a mike and jumping around wildly, supported by the other three in a choral manner, invokes her remarkable professional success by listing all the prizes that she has won as theatre director, the exaggeration is so strong that we give up any attempt to judge the performance by aesthetic or rational criteria. Prizes, success, efficiency, results, public opinion, meaningfulness and their shadow side, emptiness, inconsistency and meaninglessness, become concepts that we sense physically, almost bringing us to nausea.

In another scene, Nina tells us of an episode when she went to see a performance of Peter Stein after having eaten a space cookie to avoid boredom. She reveals a terribly embarrassing fact of her defecating during the performance, while seated next to Peter Stein himself. Afterwards, she confesses that it happened only in her drug-induced hallucination, but it is too late: we are already completely shocked. Nina, a nice and pretty girl, an intelligent and successful young director, affirms and embodies different kinds of socially unacceptable behaviour, like drug consumption or furious insults of her older colleague Peter Stein, with such ease that our middle class value system crashes. In addition, everything smells of beer, which the actors not only drink on stage but splatter and spray on each other and all around the space during the long orgiastic rebellious fight-dance, sliding on the wet floor like children on ice.

Many are the topics that this performance explores. Some refer to the purpose of theatre and the condition of the artist; some are related to the ex-Yugoslav historical and cultural context: like the goosebumps moment when the actors recite the now almost forgotten Oath of Tito’s Pioneers, which every child in Yugoslavia solemnly had to take at the beginning of school years . . .

But the key moment, in my experience, was the disclosure of Nina’s emotional pain, related to her love relationship and the loss of her partner in an accident in which she felt herself involved and responsible. It was a moment of extraordinary density, almost sacredness, which outgrew the contours of her personal story and took the shape of a modern tragedy. As in the theatre of Grotowski, whom she mentions a few times during the performance, Nina, assisted by Nataša Keser who was also part of the real-life accident, shares with us, as an offering, the core experience of her life. This is an ultimate act of engagement. As for us, by witnessing intimacy and pain, by experiencing her being fully, unconventionally, exaggeratedly brave and present, we reach a collective catharsis. A total theatrical act.

The third part of the performance brought us to a completely different scenario and atmosphere: located in the courtyard with fire, food and music, it was a Balkan family round-table reunion or something similar, with the usual interpersonal dynamics: exploitation, self-interest, hypocrisy, envy, infidelity, sexism and so on. A grotesque and picturesque theatre-like theatre. The language interestingly switched from Slovene to Serbo-Croatian. Trying to find the connection with the previous parts, I guess that this was a step out of the intimate, exclusive personal and artistic milieu to the outer, more primitive local social sphere. Sincerely, after the intensity of the previous hours, I took it as a cocktail time, where luckily something very playful was still happening, and we were still together, “we” since we were now among the actors, sharing pepper and bread.

As an ulterior layer and in contrast to all this, the performance ends with Nina’s (or her character’s) monologue, set in the year 2071. It gives us a vision of the human race as airy and light but also without roots or connection to the ground. Somehow, it makes us think that all this material reality, from our greasy fingers to the social and economic conditions that we fight against, is still so touchingly human.

As a conclusion, if the performance calls into question the power of theatre, I could answer by sending a personal message to Nina: Yes, Nina Rajić Kranjac, you moved me, you inspired me, you changed me, you gave me strength and courage, you reminded me that I have guts too! And maybe I will move someone else, maybe one of you who reads this article! Because if we show who we are (not talk about who we think we are) everything changes forever!!!

*Tina Perić (MA in Art theory, PhD in performance studies) is a researcher in performance theory, a free-lance critic and a performer. She is the author of the book The Way of the Performer: from I to Self (Sterijino Pozorje, 2019) She is actively taking part in various projects and workshops in the field of dance, music and theatre. Her performance Ruža (Rose), realized with her mother and daughter, premiered in March 2022.