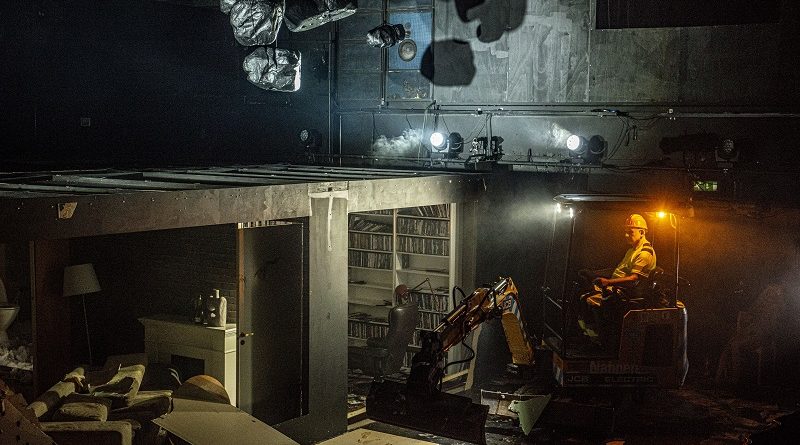 Since beginning the Ibsen-Saga in 2006—a five-hundred-year project to stage the complete works of Henrik Ibsen—Vegard Vinge (Norwegian director and performer) and Ida Müller (German scenic designer and performer) have acquired a reputation as theatrical maximalists. The Saga’s narrative reframing, uncompromising aesthetic and unpredictable performances address Ibsen’s most persistent theme: the individual’s struggle to break free and know themselves in a compromised world. Vinge/Müller’s effort to break through theatrical limits finds them among the most innovative and unpredictable European theatre artists of their generation and the twenty-first century’s most vital interpreters of Ibsen. Their previous seven productions, in which each performance is different, have lasted upwards of two-continuous weeks and have regularly exceeded twelve hours.[1]

Vinge/Müller’s signature aesthetic is an artisanal artificiality in which every production element is rendered as overt fiction.[2] Grotesquely masked performers move robotically through hand-painted diorama sets, while every gesture and utterance is tracked by prerecorded effects underscored by loops of opera and pop music. The fictional frame enables Vinge/Müller to expand Ibsen’s worlds through an associative dramaturgy that stages scenes only alluded to in the plays, or reimagine the dramas through complimentary stories and characters. The fiction is ruptured by acts of real destruction and excretion coupled with copious gore. Dressed like their stage creations, Vinge and Müller typically perform in the works. Vinge directs the shows in real-time, roaming the theatre or instructing his collaborators through a microphone. Müller, who remained in the technical booth for these performances, usually plays one of the children from the texts, reimagined as a long-suffering but eventually victorious idealist.

Hedda Gabler (2022) is Vinge/Müller’s first installment of the Saga since 2018 and the inaugural production in a five-year residency at Oslo’s Det Norske Teatret. For artists who never fail to surprise, Vinge/Müller did the unthinkable: they abandoned their artisanal style to stage an assault on the sterility of our modern age. The nearly five-hour performance opens with projected, animated sketches featuring the play’s characters engaged in obscene acts, continuing a practice of depicting the brutalities of Ibsen’s texts with direct, puerile intensity. Aunt Julie coddles Tesman in a puddle of his urine; Hedda showers Julie in menstrual blood to prove she’s not pregnant; Løvborg dies in a triptych of suicides. The characters line up downstage to mime-sing, “Heeeedddddaaaaaa Gablerrrrrrrr,” a thundering rock opera created by long-time collaborator Trond Reinholdtsen, while the characters’ names flash across the curtain.

When the curtains open, the characters disappear into the Tesmans’ six-room home enclosed on all sides by black walls. The action inside is visible only through livestreams projected onto screens hung above the house, while the structure sits onstage like a massive time capsule. Livestreaming action is common in Vinge/Müller’s work, a practice adopted from German scenographer Bert Neumann. What shocks is that the Tesmans’ house bears none of the Saga’s aesthetics. Instead, we see a non-descript, IKEA home replacing Vinge/Müller’s singular craftsmanship with commercial sterility. Everything is familiar and cheap: appropriate décor for Hedda’s hellish cage of domesticity.

Unfolding nonlinearly, the first night featured scenes from the play’s first two acts and digressions centering on the implosion of the Tesman home. Hedda, played by a woman in a blonde wig and slinky lingerie, is a sensual aesthete, stripping to a pearl necklace while singing to Ambroise Thomas’ opera version of Hamlet (1868). Defiantly naked throughout the performance, Hedda prowls the set spinning her revolvers. Hedda’s husband, the ineffectual Tesman, is refashioned as a 1990s movie nerd, shuffling around in a bathrobe and obsessing over his DVD collection. Aunt Julie and Tesman try to tame Hedda, forcibly shaving her pubis in extreme close-up as if to smooth the path to fertility. Later Tesman’s frustrations with his wife morph into re-enactments from Stanley Kubrick’s The Shining (1980), with Tesman, as Jack Torrance, throwing Hedda, as Wendy, against walls and choking her with a shower cord. Exaggerated sound effects underscored the violence, vivifying the slapstick brutality.

The Tesmans are soon beset by Mrs. Elvsted and Løvborg. A hedonistic antidote to the Tesmans’ antiseptic world, Løvborg is a drunken troll with a nest of unkempt hair and a cape of vine leaves that expose his genitals as he drags his manuscript around in a sack or luxuriates in a mud bath. Once the cast is assembled, the house fills with stage smoke until the interior is nothing but white haze. Hedda exits the house twirling a pink-handled claw hammer and viciously knocks bullet-sized holes in the black façade, unleashing beams of haze-filled light into the theatre. For twenty minutes, Hedda smashes the wall, while from the inside, Vinge—dressed as Hedda in a red dress—throws himself against the barrier until the plywood collapses in a heap of rubble. As with all the Saga’s productions, material destruction is synonymous with the unleashing of primal urges.

Hedda is visited by her dead father, General Gabler: a swastika-wearing Nazi leading a real horse into the theatre. The Saga commonly explores Ibsen’s themes of inheritance as the inescapable influence of Fascism on our century. Inside Hedda’s fantasy, the male performers stand naked as the General circles the home with his horse, stopping to execute the cast members who crumple to the stage. Vinge coats the victims in fake blood as Hedda gyrates in the smashed frame of her home. The juxtaposition of an actual horse shitting on stage and the fictitious murders gets to the heart of Vinge/Müller’s aesthetic game of combining heightened images of reality and fiction. Like Hedda’s fantasy, the collision of aesthetics offers an escape from the banality of Tesman’s world.

The violence and destruction ratchet up with the arrival of Judge Brack: a technophile in a black leather suit and long ponytail. For Brack’s second-act stag party, the cast drown themselves and the set in gallons of booze. Speaking in the voice of Steve Jobs, Brack introduces Tesman to the iPhone before recruiting him into a cabal.

Brack spikes his vein with a butterfly needle and draws a cryptic symbol in real blood. The ritual unleashes an emergency, evoking the pandemic lockdowns, causing the cast to frantically evacuate the set to wailing sirens. What is unleashed, however, is a restorative catastrophe. A mini construction excavator, driven by a man in a mask, ominously enters at the back of the theatre. Vinge comes on stage and instructs the operator to destroy the Tesmans’ home. The machine punches through the set’s back wall and scoops up Hedda’s beloved piano in its steel-toothed bucket, splintering the wood before dropping it like a corpse. The excavator manoeuvres to the front of the house while Vinge warns the audience to vacate the first two rows. The audience scrambles up the seating rake to watch the machine—a vengeful deus ex machina of aesthetic ideals—dig into Tesman’s office as the curtains close. By the end of the third performance, which I watched on film, the Tesmans’ home was completely decimated, clearing the stage for whatever might come next.

*Andrew Friedman is an Assistant Professor of Theatre History and Dramaturgy supervisor at Ball State University, United States of America. He is completing a monograph on Vinge/Müller’s Ibsen-Saga and a co-edited collection on theatrical objects with Eero Laine.