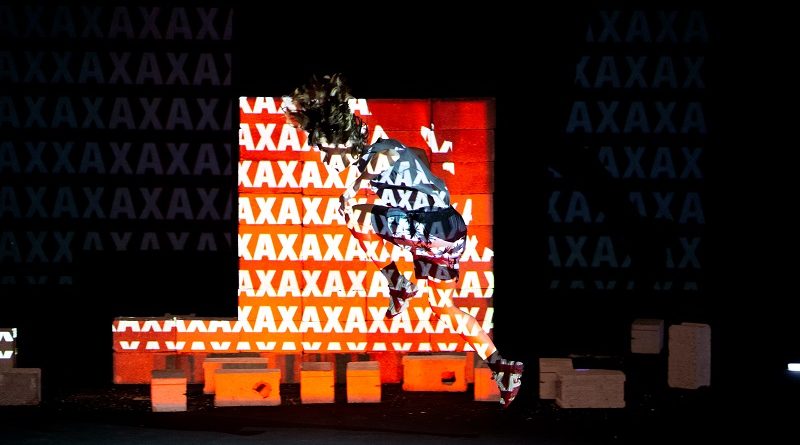 Katerina Andreou, a Greek artist based in France, made her debut as a choreographer with A Kind of Fierce, a solo piece, in 2016. The piece toured around Europe, while her second work, BSTRD, reached as far as Africa. Andreou works mainly in the form of solo, although she has also a duet and a group choreography in her repertoire. She choreographs, performs and designs the music. For Andreou, music (her “partner on stage”) and dance are equally important in her dramaturgy. I watched her last piece, Mourn Baby Mourn, in Athens. The piece premiered in Lyon and, as this review is being written, it continues travelling.

Ten LED linear strip lights bracket an enclosed stage in the black box theatre. We can see a pile of grey cement bricks. Some of them are placed in a short narrow wall, while others are interspersed around. Katerina Andreou crosses the boundaries that separate the stage from the auditorium. She moves towards the pile, transfers and relocates some bricks, gradually building a wall. Sparse sounds create an aural space that enhances the impression of her action, which is careful, concentrated, steady and consistent.

We can acknowledge her effort. The blocks are heavy. Their weight imposes a certain motor activity, producing a deviant, physical act of dance (after all, we are at a dance performance). This performative act provides no symbolic meaning. It is neither a metaphor nor a depiction of something outside the theatre. However, some associations are inevitable: walls we must break down, those that limit our step and sight; those we can write on in the real world, scroll and post on the digital one. The physicality of the performer’s body and the raw construction material draw our focus to the materiality of the here and now. The action of ordering and uniting the blocks defines the pace of the show. It prepares us for what is to come. It gives us time to cross the distance from the everyday experience to that of the theatre.

Both the soundscape and the lighting change subtly. The wall grows taller. It is transformed into a projection surface where short phrases float up and disperse. A monologue unfolds, written in plain white capital letters, recounting thoughts in the first person. Its syntax and formation remind us of spontaneous text messages. We read about the need to “THROW WORDS ON THE WALL” so as not to “BURST.” The courage needed, the “FORTISSIMO” strength and the impetus, the required “PURE ENERGY.”

Writing in capital letters is usually interpreted as shouting and therefore culturally discouraged. Shouting is considered inappropriate, and so is exploding as it is identified with violent emotion. A more accepted feeling is melancholy. She plays with the polysemy of the meanings, reflecting constantly back on the praxis of the performance. We read, “MAYBE IT’S SADNESS,” “SOMETHING BLUE,” “SHIT, I CAN’T SMASH A WALL WITH BLUE,” “ME, I SEE EVERYTHING IN RED . . . THE BLOOD PUMPING MAXIMUM SPEED, IT COLOURS ALL THE REST.”

The Blue can be a colour and a sense familiar to the viewer. And so is Red. It is the colour of blood, which speeds up its flow while dancing, and colours the dancer’s body from the inside. Moreover, when Red relates to “smashing a wall,” it implies a political choice. It adds, in retrospect, a political meaning to Blue, to melancholy and sadness as real, experienced feelings. Common emotions, shared between us and the performer, with which we need to reconcile to reorientate. Mourning, Andreou declares, is “SUPER PRECIOUS,” “IT’S NOT ONLY SPOILED TEARS.” Instead of lamenting a lost past, she suggests, we should imagine and claim a viable future.

The soundscape and the lighting become sharper. Her movement transforms into an idiosyncratic, intense, unconventional dance. We recognize movements, drawn from a database of casual gestures and her previous performances. I can feel her bodily strength and her concentration. Is this an enactment of “courage,” “impetus,” “nostalgia,” “anger” or “melancholy” mentioned on the wall? It doesn’t seem important to search for an answer. There is nothing here to be interpreted. Her dance resonates, unmediated with our actual conflicting feelings.

The words on the wall collide with each other until a multitude of falling “AH” reverse into a raging river of e-laughter (haha). The soundscape converts into electronic dance music. Andreou runs, moves, jumps, rolls and gestures, in a unique, strange, idiosyncratic free-style physical dance. The music slows down into a beat, dragging along her movement.

She climbs the wall that has become a screen for a retrowave video projection. She sits with her legs dangling and composes live ambient, 90s-like music with a small portable soundboard. The music, the video and her clothes give an impression of the past infused into the present. This “slippage of discrete time periods into one another” is familiar today (Fisher). It is reflected in fashion, clothes, decoration, music or even filters on photos taken with a mobile phone. I catch myself travelling back to the 90s while acknowledging being in the auditorium, recalling the feeling of spending endless hours listening to electronic music, dreaming and imagining the future to come. I am becoming emotional and nostalgic, while simultaneously, feeling curious about the effect of this scene on the Zoomers that are watching the performance.

I see her sitting calmly on the wall, and it crosses my mind that she looks like a child. What is to follow surprises me. “JUST BETWEEN US,” I read, “I DON’T KNOW HOW OLD I AM ANYMORE.” And then, the monologue on the wall starts again, its flowing up recounting her (and my) conflicting feelings oscillating between nostalgia and its denial. Andreou turns her body to the auditorium as if both confronting us and giving us time to read: “I PREFER THE WALLS,” “THEY MAKE ME WANT TO REACT.”

Combined with nostalgic music, this refusing to yield doesn’t seem to shout anymore (even if it is still written in caps). A sea soundscape is getting louder and louder. The performer comes down and restarts her building-dancing action. Her idiosyncratic vibrant moves scan the space while the music becomes edgy until it transforms into a frenzied dancing beat. On the wall is projected: “THE FUTURE WE HOPED FOR WILL NEVER COME.” “I HAVE TO IMAGINE A FUTURE WHERE I CAN CRY FOR.” “IMAGINE AND CRY AT THE SAME TIME.” She dances intensely while dolphins jump on a second retrowave video projection. The music stops abruptly. She sits and waits. On the blackout, a small word silently enacts the final performative gesture: “BOOM.”

To cope with the present and vindicate a future, Andreou seems to assert, we have to confront “the melancholy and frustration resulting from seeing our promised future being dashed” (Andreou). For Andreou, we need to embrace the political potential of melancholy instead of pathologizing it. And thus, the solo performance, which is traditionally considered the quintessential form of self-expression, reveals the personal as political, the body as a battleground. Katerina Andreou creates, once again, an artwork that is distinct in form and sharp in content. She embraces the power of lamentation and looks to the past to gaze into the future.

*Paraskevi Tektonidou (Athens, Greece) holds a degree in Flute and Musicology and a MA in Drama and Performance Theory. Currently, she is a doctoral candidate at the Athens School of Fine Arts, specializing in contemporary choreography and dramaturgy. Her research investigates the political in the creative process, the act of performance, spectatorship and perception. She works as a dramaturg. She also reviews performances, writing in various online cultural sites and a newspaper. She is, since 2018, a member of IATC Greece.