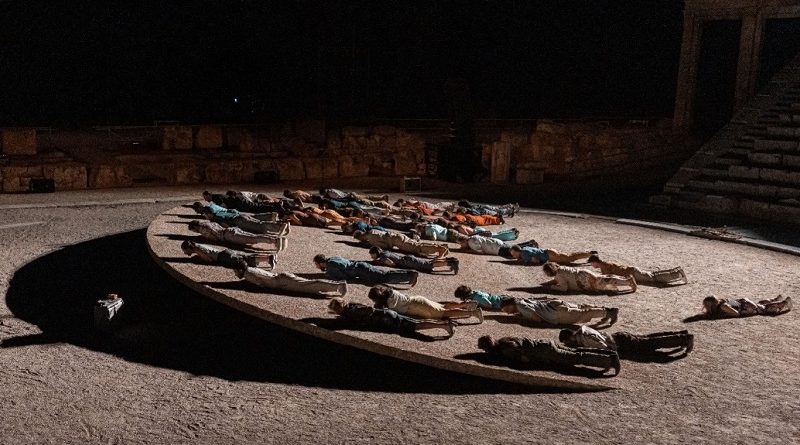 Aeschylus’ Persians, the earliest surviving ancient Greek tragedy, was first presented in 472 BC. It refers to the battle of Salamis that took place in 480 BC and resulted in the total devastation of the Persian fleet. Aeschylus, who had himself fought in this battle, presents the story from the Persians’ side, setting it not in Athens but in Susa. Thus, he documents the disaster and the subsequent lament from the side of the defeated. At the same time, the tragedian is warning his fellow Athenians about the dangers that may arise from arrogance, as happened with the Persians who overestimated their strength against the Greeks. A warning that seems as timely then as it does now.

The ancient tragedy starts with a Parodos, a choral “prologue,” an archaic feature which does not exist in any other extant tragedy. This choral opening highlights the fear and anxiety of those left behind for the fate of their King, Xerxes, and his army, as well as for their own safety. The old men who comprise the Chorus recount the names of the Persian warriors, presenting the magnitude of the imminent disaster they fear. Their naming also brings innumerable men out of anonymity, underlining their braveness and loyalty to their country, and mostly to their king. Atossa, the Queen Mother, fearing a possible disaster, decides to offer sacrifices to the gods, asking for advice from her late husband Darius. Finally, Xerxes will return defeated and alone with all his men gone in battle.

Persians was last presented at Epidaurus’ theatre two years ago, following the first COVID-19 quarantine in Greece. The then newly elected Artistic Director of the National Theatre of Greece, Dimitris Lignadis, had chosen this tragedy to comment on the arrogance of those in power during a period when many human rights had been violated because of the pandemic. Two years later, in 2022, before the beginning of this performance, a large panel was held up among the audience at Epidaurus’ theatre. The panel read “rapist he is,” referring to Lignadis, one of the first accused in the Greek #metoo. During the two years since the previous staging of Persians, the former Artistic Director had been accused, tried and convicted of rape. Critical Stages reviewed Lignadis’ production: www.critical-stages.org/22/defeats-to-lament-lives-to-celebrate-fragments-of-a-greek-festival/.

After Lignadis’ Persians, Dimitris Karantzas chose to comment on the arbitrariness of those in power, also highlighting the stance of laos (the people). To better depict society’s unanimity, Karantzas replaced the all-male elderly chorus with young men and women. Additionally, he added forty (non-speaking) volunteers to the chorus to underline social diversity.

These volunteers entered the stage from their seats among the audience, thus highlighting that they could have been anyone. Nevertheless, although the director’s choice was innovative, it caused several dramaturgical problems, weakening the tragedy’s impact. In showing the old people mourning, Aeschylus creates a tragic counterpoint, since the elders are still alive while the entire new male generation is lost in the war. This inevitably signals that there is no future for the kingdom of Persia. Furthermore, the elders express their own agony at the prospect of being enslaved, particularly towards the end of their life, highlighting the importance of ageing in dignity. Their reminiscences of their country’s glorious past are augmented by the appearance of Darius’ ghost, next to whom they had fought and triumphed, in contrast to the present adverse times. Thus, the Aeschylean chorus stands between the glorious past and the tragic present of their country.

Dimitris Karantzas used the most linguistically consistent and dramaturgically interesting translation in modern Greek (Panagiotis Moullas), although it dates from the 1970s, having been originally intended for Karolos Koun’s Theatro Technis.[1] However, he replaced parts of the Aeschylean original (Parodos and Stasimon) with other texts and poems, disrupting the balance of the Aeschylean tragedy, especially in the case of the Parodos. As a result, the beginning of the performance was rather verbose and much concentrated on the arbitrariness of those in power, omitting the consequences of a disastrous war on the people and the atrocities committed by the Greek side as well. Aeschylus gives equal blame to both sides, showing that human behavior is always double sided, an aspect missing from the present production.

The director managed to eloquently portray both Atossa and Xerxes. Reni Pittaki (Atossa) expressed the arrogance of the sovereign who is solely concerned for her son’s fate, presuming that even if he lost the war, he will still be King. For her, men are replaceable as long as the Empire’s wealth is not lost. At the same time, she shows her selfishness in acting more like a mother than a Queen, worrying for no one but her son. Dressed in a blue suit, reminding one of a dictator, she orders people around, trying to ensure Xerxes’ future as King when he returns.

Dimitris Oikonomou (Xerxes) descended from the audience’s seats, dressed in an impeccable suit, looking more like a yuppy than someone who has returned from a devastating war. He rejected every responsibility towards his army and his people. Karantzas’ Xerxes was depicted as a spoiled son, concerned only with maintaining his authority, after failing to compete with his father’s prior achievements.

The Aeschylean Darius, acclaimed for his kingship, was dear to the old people who had fought on his side in the past, where Giorgos Gallos’ Darius appeared distanced from the chorus, both physically and emotionally, approaching only the Queen. Placed at the far right of the skene, he failed to emotionally associate with the chorus, and evoke either remorse for those lost, or phobos (fear) of things to come.

In Karantzas’ performances, opsis (stage and costume design) always plays an important role. In Mystery 35_Aeschylus’ Persians, the stage design (by Cleo Boboti) placed the tragedy in a dystopian setting, signaling the forthcoming end of the Persian Empire. Bare of any palaces or wealth, as depicted by Aeschylus, the director presented an empty stage without the affluence to which the Queen keeps referring, thus highlighting that people are what is important in life. The costumes (by Ioanna Tsami) were of earthy colours, for every character, reminding one that all are equal, and everyone is made of flesh and blood. This strange equality was best depicted when the Queen, along with the Chorus, kneeled to pray to Darius, forming an odd, human palette.

Karantzas’ Mystery 35_Aeschylus’ Persians offered an interesting aspect of the Aeschylean tragedy. The director tried hard to give a fresh look to the text, as his novelties show. Nonetheless, he failed to serve the tragedy’s scope, treating it rather as a realistic play. Consequently, he was not able to maintain the equilibrium that exists within all texts of ancient Greek drama.