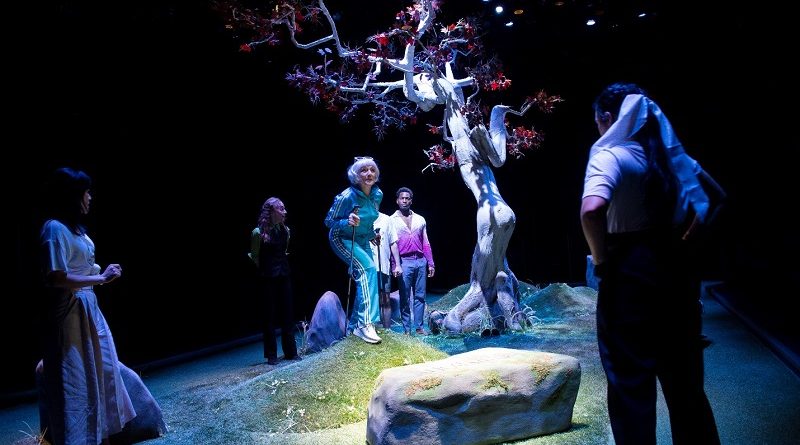 Gem of the Ocean, by August Wilson, directed by Philip Akin; August 5 to October 9, 2022. Everybody, by Branden Jacobs-Jenkins, directed by László Bérczes; June 8 to October 8, 2022. Both shows at the Shaw Festival, Ontario, Canada.

You wouldn’t expect a Canadian theatre festival dedicated to the works of Irish dramatist Bernard Shaw to also be a showcase for African-American writing. The Shaw Festival at Niagara-on-the-Lake, Ontario—a picturesque historic town on the shores of Lake Ontario, about 130 km from Toronto—has, in fact, been quietly building a reputation for impressive productions of plays by America’s leading Black playwrights.

That was brought home during the 2022 season—the Shaw’s 60th and its first “normal” one since the pandemic—when it staged not one, but two works by Black writers from the U.S.: Gem of the Ocean by the great August Wilson and Everybody by rising star Branden Jacobs-Jenkins.

To understand their place at the Shaw, you have to appreciate the festival’s evolving mandate, which has come to embrace not just the plays of its provocative namesake but also those written in the Shavian spirit (that is, vigorously intellectual, challenging the status quo). A decade ago, the festival began to partner with Toronto’s Obsidian Theatre, one of Canada’s foremost Black companies, to stage work that fitted the criteria.

Philip Akin, Obsidian’s former artistic director, has become the festival’s principal interpreter of Black playwrights. In 2021, he mounted a revelatory production of Alice Childress’ rediscovered Trouble in Mind. This past season, he was at the helm of Wilson’s packed, powerful Gem of the Ocean.

Gem is the first instalment in Wilson’s monumental 10-play Pittsburgh Cycle, chronicling African-American life in the twentieth century—one play per decade. Set in Pittsburgh’s Hill District in 1904, the work has a particular appeal to Canadian audiences. Two of its characters are former “conductors” on the legendary Underground Railroad, the secret network of back roads and safe houses that helped slaves in the pre-Civil War American South escape to freedom in Canada.

When the aforesaid conductors, Solly Two Kings (played by David Alan Anderson) and his buddy Eli (Jeremiah Sparks), gleefully recall arriving in Canada to be greeted by smiling people “white as cotton” and extol the country north of the U.S. as “Freedomland,” you might almost think that Wilson (who died in 2005) was anticipating this production. (Of course, Canada has its own shameful history of slavery and racism, but that’s another story.) However, Solly couldn’t remain in Canada while his people were still in chains. Now, four decades after the Emancipation Proclamation, he’s eking out a living in Pittsburgh while still questioning what it means to be truly free.

Solly is a frequent visitor at the home of Aunt Ester Tyler (Monica Parks), a forbidding matriarch who claims to be 285 years old and who specializes in “cleansing souls.” When the play opens, she’s being importuned by a desperate young man, Citizen Barlow (Nathanael Judah), who insists on being cleansed for a murder.

Citizen Barlow has fled the segregated South only to find conditions are scarcely better in the free North. Given sanctuary by Aunt Ester, he’s put to work by her gatekeeper, Eli, and begins a flirtatious friendship with her young domestic helper, Black Mary (Sophia Walker).

In the meantime, Solly has received a letter from his sister in Alabama, detailing the deteriorating conditions for Black folks, and is determined to bring her North. His decision to briefly defer his mission to help Aunt Ester with the cleansing ritual for Citizen Barlow becomes his downfall.

While Solly Two Kings is the play’s self-sacrificing hero, its villain is local constable Caesar Wilks (Allan Louis). Caesar, who is Black Mary’s brother, has lived a life motivated by self-interest and finally betrayed his roots by becoming an enforcer of the white man’s laws. Like all the best villains, he’s full of eloquent justifications for his choices, which a smooth Louis delivered persuasively.

Wilson artfully mixes the melodramatic with the mystical, the latter reaching a crescendo in the eerie, emotional cleansing of Citizen Barlow. It finds Aunt Ester conjuring up a voyage on a ship dubbed Gem of the Ocean to a city built entirely from the bones of slaves who didn’t survive the crossing from Africa to America. Involving a giant map, a paper boat, masks, incantations and singing, it became, in Akin’s assured staging, a scene at first mildly comical and then profoundly moving, as Judah’s Citizen Barlow becomes helplessly, fearfully immersed in the haunting illusion.

The scene also included a neat little coup de théâtre. Designed by Camellia Koo, the entire show took place around a multi-purpose refectory table, which dominated the Jackie Maxwell Studio Theatre’s in-the-round playing space. At the height of the cleansing ritual, the table began to split into two down its entire length, creating a curving channel that Citizen Barlow negotiated on his way to the City of Bones.

Akin drew strong performances from his cast: Judah, a picture of rough-hewn, round-faced naivety as Citizen Barlow; Walker, by turns sullen and saucy as Black Mary; Sparks, bringing both muscle and a sweet singing voice to the role of Eli; an amiable Jason Cadieux as Rutherford Selig, a peddler of goods and gossip and the play’s sole white character. Anderson as Solly, with his mighty staff—bearing 62 notches, one for every slave he’s helped escape—conveyed the steely determination of a Moses-like figure, as well as the torments of a man who has seen real freedom continually withheld from his people. My only quibble was that Parks, while a very fine Aunt Ester, seemed too youthful in the role of an elderly woman described by Caesar as having “both feet in the grave just waiting for the body to follow.”

Gem of the Ocean ends with a passing of the torch, as Citizen Barlow takes on Solly Two Kings’ mantle and embarks as a new generation of freedom fighter. Knowing that this play is the start of a century-encompassing cycle, it leaves you contemplating how much African-Americans would attain over the coming decades and, despite that remarkable progress, how deep the legacy of racism still runs in U.S. society today.

Racism is still the great, inevitable theme that every serious Black playwright in America must at some point address. Jacobs-Jenkins, a writer with a propensity for satire, did it brilliantly in An Octoroon, his contemporary deconstruction of Dion Boucicault’s nineteenth-century slavery melodrama, in the Shaw’s 2017 season. But in Everybody, his cheeky but poignant rewrite of the medieval morality play Everyman, he takes on a subject that touches everyone, regardless of, as they used to say, race, creed or colour.

Everyman, that fifteenth-century exhortation to Christians to repent and do good before the Last Judgment, has survived into a secular age thanks to its sobering reminder of the ephemerality of human life and the inevitability of death. In his modern version, Jacobs-Jenkins takes a lighthearted approach without diluting the play’s essential truths.

He’s also turned it into one of those exercises that challenge actors and delight the audience. A lottery is held onstage at the start of each performance to determine which of five actors (in a cast of 10) will portray the role of the doomed Everyman—here renamed Everybody. The remaining four are given 13 characters to play. That means all five actors have had to memorize 14 roles, not knowing who they’ll be playing at any given show. It’s a tidy way of showing that Death can come to anyone at any time.

Death herself was played in the Shaw production by festival veteran Sharry Flett as a spry, track-suited grandmother type. God is a woman, too—embodied here with comic brio by Deborah Hay, who appeared first as an awkward Shaw Festival usher, charged with speaking the show’s introduction, before transforming, with halo, microphone and blind spectacles, into a thundering—but apparently not all-seeing—Deity.

God orders Death to lead Everybody to their final reckoning and Everybody tries to get one of their allegorical pals to tag along—Friendship, Cousin, Kinship or Stuff. All turn down the invitation and, eventually, Strength, Beauty, Mind and Senses abandon Everybody as well. Finally, it is only Love and Evil, what they have done in this life, that will accompany them into the grave.

Jacobs-Jenkins’ contemporary interpretation replaces the original play’s Christian beliefs with a general sense of morality and the existence of God is continually brought into question. He also frames Everybody’s encounters with Friendship et al. as a series of dreams, followed by waking discussions. In one of these, Everybody takes exception when someone repeats a racialized term used by Friendship, accusing the speaker of being a “crypto-racist,” which grows into an ongoing dispute. It’s a diverting digression, perhaps the playwright’s nod to the fact that, as a Black writer, it’s an issue he can’t dodge even in this context.

The show was directed and designed, respectively, by the Hungarian team of László Bérczes and Balázs Cziegler, who adopted a playfully macabre tone. Like Gem of the Ocean, the show was presented in the round at the Jackie Maxwell Studio, the entire space carpeted with artificial grass to resemble a cemetery. Cziegler’s set consisted of a pleasant green landscape with trees and large berms that suggested graves. Kevin Lamotte’s lighting included moments when we were plunged into funereal darkness and composer Claudio Vena provided a score in the jaunty vein of Gounod’s Funeral March of a Marionette.

Apart from the actors already mentioned, the ensemble included Patrick Galligan, Julie Lumsden, Michael Man, Kiera Sangster, Travis Seetoo and Donna Soares, all as the potential Everybody, along with Andrew Broderick as Love and Alana Randall as Time. In one of the play’s funny/sobering moments, Hay’s usher explains to Time that the shirt she’s wearing came from the Shaw Festival. To which Time responds: “I have no idea what that is.” Ouch. Even 60-year-old theatre institutions may be nothing in the grand temporal scheme of things.

For now, though, the festival is important, not least for letting Canadian audiences hear the voices of major Black American writers, after decades in which their white American counterparts have dominated the country’s playbills. We only wait to see more of Canada’s BIPOC playwrights on its stages.

*Martin Morrow is a Past President of the Canadian Theatre Critics Association and a two-time winner of Canada’s Nathan Cohen Award for excellence in critical writing. He has served as chief theatre critic of the Calgary Herald (1988–2000), Fast Forward Weekly (2003–06) and The Grid (2011–14). Since 2010, he has been a theatre critic and arts writer for The Globe and Mail, Canada’s national newspaper.