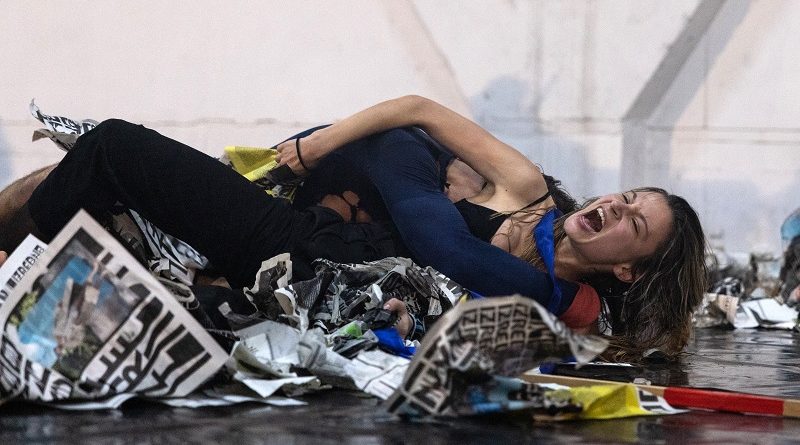 Ivan Medenica, Artistic Director of BITEF, selected participants to accommodate the issues of environment, labor and women. Each performance treated these three topics either separately or collectively. Seemingly, raising social consciousness was more important than inventing corresponding production values. Thus, I remember this 2022 festival as being most aggressive in its ideology rather than in its aesthetics. I will review three most interesting shows in the main program.

According to its tradition, BITEF started on its first night with (Not) the End of the World, the Prologue that introduced the thematic and aesthetic lines of the festival program. The performance, by the Schaubühne theatre from Berlin, Germany, clearly demonstrated how theatre people might handle our environmental crisis in their theatre-making. Katie Mitchell directed the German actresses on line from her London living room, refusing to fly to Germany in order to reduce emissions. The actresses and crew came to Belgrade by train. The costumes and props are taken from old productions; the stage design is created from recyclable materials; and the electricity for the show is produced during the performance by pedaling two special bicycles.

The play, written by young British author Chris Bush, deals with the whole process of a job interview: a young black female climatologist is being interviewed for a postdoctoral position by a renowned white climate change academic on the professor’s research team. The interviewee does not seem any less knowledgeable than the interviewer about climate change. She even proves from time to time to be more keenly observant of the ecological crisis around the world. But the play is more about gender, colonialism and power structure than about ecology, and it ends with the failure of the powerless black applicant to be awarded the position by the powerful white female interviewer, who is deeply contaminated by the patriarchal culture of society. Unlike in London and Berlin, even the bikers here in Belgrade are women. Therefore, the theme of discrimination of women by women is additionally addressed.

Katie Mitchell directs the play as a staged reading. She limits the movements of the interviewer and the interviewee to opening and slamming the door throughout the process of the interview. In the discussion after the show, the actresses expressed their satisfaction, saying this repeated action was Katie’s beautiful choreography. But for me, Mitchell has divided the play into Stanislavskian “beats” rather than French “scenes” by making the two actresses repeat the opening and slamming of the door as many as 260 times, if my memory is correct, in the 90-minute show. What kind of choreography is that?

The spectators gave a standing ovation with loud bravos at the curtain call. They appreciated the company’s great efforts to make eco-theatre by trying to employ every possible measure to radically reduce carbon emissions. I, too, admired their philosophy and practice of ecological theatre, pursued with extreme commitment. This extremism, however, forced me to vacillate between their practice and my professional ethic. I am a critic who tries to see as many shows as possible, in as many different places as possible. I flew for more than 24 hours to Belgrade from Seoul without worrying too much about emissions because I had to in order to see this important performance. Am I an enemy of eco-theatre? I who, living in a mega city like Seoul, am trying my best every day to practice an ecological lifestyle?

To be extremely honest, this production did not provide me with artistic pleasure by radically limiting the play’s aesthetic choices in its pursuit of ecological theatre. For me, one of the solid reasons to go to the theatre is to seek pleasure, visual, aural, musical, psychological, philosophical and cultural. I wonder if it is a proper approach to theatre to deny this pleasure by sticking to extremely activist carbon-zero theatre practice. Or do we spectators have to accept this debilitated pleasure of eco-theatre as its main form of pleasure in the future? Is there no way to practice eco-theatre without sacrificing production values? I talked about this at the after-show discussion, and several people expressed their appreciation to me. We have to find a win-win strategy to balance ecology and theatrical aesthetics, I think.

Solo, too, focuses on labor and women. Written and directed by Nina Rajić Kranjac, it is a co-production of Mladinsko Theatre and Maska, both from Ljubljana, Slovenia. The play is mostly a job-related autobiography of Nina, who also plays in the show along with three colleagues: Nataša Keser, Benjamin Krnetić and Marko Mandić. The performance was done in Stari Matrez, a concrete hangar in the deserted port, Luka Beograd. Without any theatrical facilities, the place offers the company a perfect venue in which to tell the brilliant but disturbing story of a greatly talented young artist. Solo, too, follows faithfully the rules of ecological theatre, with no/minimal set, basic props and costumes. But unlike (Not) the End of the World, it employs a rich production aesthetic in its multiple styles of improvisation, hybrid, immersive, pseudo-cabaret and so on. The aesthetic richness was even more tangibly felt because of the forlornness of the given space and the physical prowess of the performers.

The play mainly follows Nina’s theatrical career, during which she has won all the major awards but was never freed from the feeling of anxiety due to the uncertainty of job opportunity for her next project: female artists are still discriminated against and isolated in the Slovenian theatre community. Nina herself plays with her three colleagues playfully, violently, physically, chaotically, unconventionally to make the show more modern than postmodern drama. Altogether, they caricature, ridicule and denounce the patriarchal culture of the Slovenian theatre community with both self-adoration and self-deprecation. For me, Solo was the most engaging show of the 2022 BITEF. It has proved that eco-theatre can also be rich in production values. The jury decided to give the Grand Prix to Solo, too.

BITEF has made it one of its editorial principles to include a show that has become a hit in Europe. For 2022 BITEF, it is Love. The play, part of a trilogy written and directed by Alexander Zeldin, has been produced by prominent companies in U.K., France, Austria and Germany, touring this time in a co-production by the National Theatre of U.K. and Birmingham Repertory Theatre. It was played in the second alternative space at Luka Beograd, on a makeshift stage in another huge forlorn hangar, Plava Hala. Another perfect space for the play’s setting, a sparsely furnished shelter in London.

The play is about three homeless families from different countries, forced to live together in this shelter in the run up to Christmas. They are from U.K., Sudan, Syria. And a stranger from Pakistan. They are desperately seeking jobs but without success. In fact, seeking jobs seems to be the only job they can do. They share one single toilet, kitchen and dining table. So, they have to fight each other even for the right to the toilet. As might be expected, they do not get along with each other in the beginning because of their social and racial prejudices against each other. But Christmas is approaching. This structure itself foreshadows the flow of the drama, a journey from conflict to reconciliation. Hyperrealism prevails persuasively throughout the show and beautifully completes a human drama, a modern day fairy tale. It is the extraordinary found in the ordinary. People loved it. I loved it, too.

*Yun-Cheol Kim, PhD, served as President of the International Association of Theatre Critics (IATC) from 2008 till 2014. During his presidency he launched IATC’s webjournal Critical Stages in 2009. Now he is an honorary president of the association. He served as artistic director of the National Theatre Company of Korea for four years from 2014 till 2017. He retired from School of Drama, Korean National University of the Arts in 2015, where he taught for twenty years and is now its honorary professor. He received the Cultural Order from the Korean government in 2008. Two-time winner of the Critic of the Year Award, he has recently published his thirteenth book, Promenade into Contemporary European Theatre in the 21st Century.