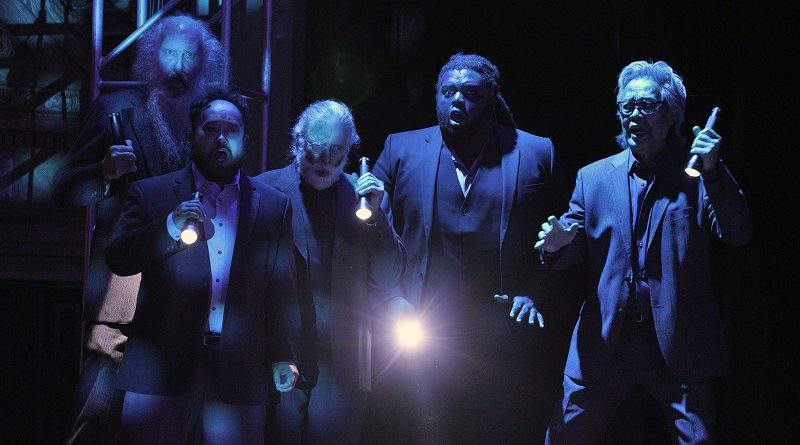 This production of the 1906/7 Ariane and Bluebeard bypassed every reasonable expectation of what it might be and achieved a stage event every bit as weird as Maurice Maeterlinck (Belgian, 1862–1949) would have hoped. From the long years of deconstructed and postdramatic performances, we are of course used to seeing dramas lacking drama, characters, plots or meaning beyond provocation. This was not that. There was a story, but it unfolded like a stutter and then made a U-turn; it took place somewhere, but where? Symbolist or no, were we allowed to expect that the title character would play a major role, or that the characters would coexist?

No, all no. There was a storyline that focused on a group of young women who went to great lengths to escape a locked chamber and who, without explanation, decided: well, never mind. Maeterlinck himself subtitled the piece “The Useless Delivery”—underlining that attempts to save the imprisoned young women wouldn’t be lending a satisfying climax to a narrative—and adopted his own well-never-mind stance about it. He wrote: “one would mistake my intentions if one hoped to find in them any additional moral or philosophical designs.” Indeed, this slippery show was like a puzzle that wasn’t complete until none of the puzzle pieces fit together.

In contrast, Maeterlinck’s collaborator, Paul Dukas (famously the composer of The Sorcerer’s Apprentice) saw the piece as a clear story about a heroine, Ariane, who arrives to deliver not only the wicked Bluebeard’s captive brides but also Bluebeard himself. Adding still another layer, in her fine program notes director Alison Pogorelc traces her growing interest in applying Carl Jung’s theories of archetypal symbols to the piece, whereby Ariane is “enlightenment personified,” delivering Bluebeard from his own interior obstacles to “self-actualization.”

While this thread in the opera can certainly be brought to the fore, Ariane certainly has her work cut out for her: Bluebeard is a violent, kidnapping sociopath. The young women, too, are hard for Ariane to rescue—they are easily distracted, by Bluebeard’s plentiful stashes of jewels, from gaining their freedom, and by hand mirrors in which to admire themselves. Actually, a piece that so embraces a male “oppressor,” and that features a group of women “survivors of abuse” so intent on not being freed from him—in fact, on staying to tend his “wounds”—might be seen as a challenging choice for a show in today’s social climate.

But this is what we love West Edge Opera for. Founded in 1979, this admirable company has given the larger San Francisco Bay Area the chance to see experimental and intimate operas, often against the odds: less produced works, Mozartian and earlier; singular pieces from the early twentieth century; and contemporary and new operas.

Since early years in one location, the company has set up shop in a variety of edgy, defunct spaces—an abandoned train station, an empty warehouse, an old auto assembly plant and the like, each time making a virtue of theatrical necessity. Their space for Ariane and Bluebeard was an Auditorium in the Oakland Scottish Rite Center, built in 1927 as a temple for Oakland’s freemasons and visually striking at every turn. Much the largest hall they have played in, and an inspiring setting for such an unusual company, West Edge Opera is crossing its fingers that it can make this Center its permanent home beyond its recently announced tenure in 2023.

I couldn’t help but feel well disposed towards the production, all these elements taken together: in the first place, anything Maeterlinck; then, the creepy tale of Bluebeard as told by Maeterlinck; the gorgeous music—someone described it as a mix of Wagner and Debussy—along with the impressive orchestra and its dynamic conductor, Jonathan Khuner; the thoughtful program notes, my affinity for the company’s mission, on and on. So, I was initially perplexed to be perplexed by so much of the design.

In the first place, most of the piece was played in near darkness. If the goal was to achieve “shadowy,” perhaps it went too far. Also, there was sometimes a big pool of light with nobody in it, while the action proceeded in the adjacent dark. I only knew from a pre-show talk that the girl-women scurrying in the dark were dressed in period wedding gowns because I couldn’t see them until enlightened by the press photos and video. Ariane was dressed in a period-less, toga-ish gown in white and was pretty often visible. Her companion Nurse was in aggressively homely modern office wear; Bluebeard was in a contemporary three-piece suit.

The central set piece was like a medium tall, spindly, angular hive, moveable into different configurations: now it was compressed so the girls were pinned inside it, now it opened into stairs to give height to other parts of the action. It looked somewhat dwarfed; it didn’t have quite the oomph to fill the large stage. It boasted cloth panels in its upper reaches that had frequently changing projections on them with inscrutable connection to the production. Visually, the structure of open squares was echoed by a white grid taped on the stage floor, but I couldn’t see that the grid was used to dramatic purpose, although its perimeter, strangely close to the edge of the stage, clearly served to mark the border between inside and outside—that is, that action outside the tape was outdoors.

Then, all of a sudden, like a revelation in a dream, I realized: I am watching a dream. About fear, and the desire for, promise of and inability to escape something terrible. And once I started watching through the lens of dream logic, everything came together—or rather, I let it come apart. It also explained why describing the show sounds like telling a dream. Stop Making Sense! Of course, there was no neat ending to the story—the show ended when we woke up. And why should all the characters be in the same era? And in a dream, why would the projected images be related to anything?

The set piece and the squares on the floor swiftly came into focus: a clear tribute to the conceptual, minimalist grid sculptures of Sol Lewitt from the 1960s on and, looking backwards, to the 1920s modernist spatial constructions of Soviet artists Rodchenko and Popova, and even to Tatlin’s famous tower structure of 1920. Why? Why not. It did leave room in the shadows for the Townspeople, a violent mob that first greeted Ariane with the fake news that Bluebeard had murdered all the brides and, on the basis of this Big Lie, later took it into their own hands to beat Bluebeard within an inch of his life. This too-familiar posse of dangerous bullies deserved more emphasis in the production.

A closing note of gratitude for the elegantly rendered surtitle translations by director Alison Pogorelc.