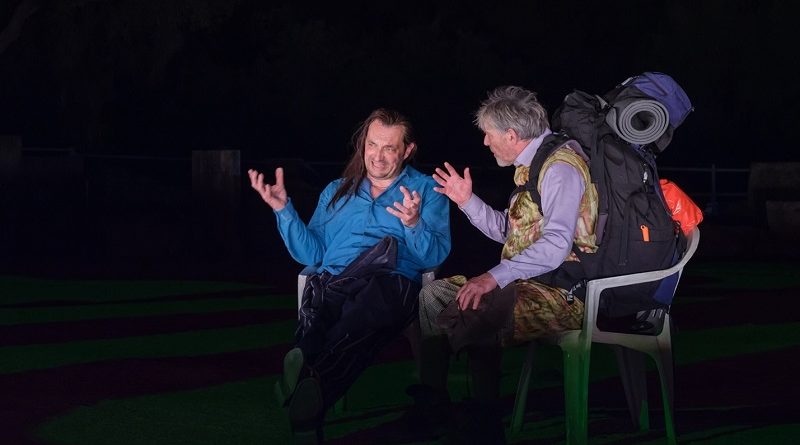 Euripides’ Alcestis was first presented at the City Dionysia of Athens in 438 BC. It was the fourth drama, in place of the customary satyr-play after a tragic trilogy. For modern audiences, an ancient Greek play that ends happily may perhaps seem like a romantic comedy or a tragicomedy, but for Euripides’ audience the play was, most certainly, a tragedy.

The mythical Alcestis agrees to die in place of her husband Admetus only to be rescued from death by a buffoonish Hercules. When she is returned from the dead, Alcestis is not allowed to speak for three days, after which she will be purified and fully restored to marital life. But is this ancient woman—the construct of a male imagination—still valid in the century of the #metoo movement?

The answer to this question is, I think, simple. It is always productive to reclaim the classical texts and re-contextualize them, questioning thereby their ideological status and endurance, exactly as Johan Simons does in this first appearance of the Schauspielhaus Bochum in the ancient theatre of Epidaurus. A type of emotional discontinuity and contradiction was broadly adopted in Simons’s Alcestis, oscillating between the furthest reaches of the frivolous and the dramatic. The folklorish set of Johannes Schütz evoked the touristic carefreeness of a Greek summer campsite (with the trailers, the tents and the swimsuits hanging on the drying racks), but, quite ironically, there was an old hearse parked behind the orchestra of the ancient theatre, waiting for Alcestis to enter it. The comic effect created by the set was further magnified by many bitter-comic interventions during the performance; for example, Alcestis’ “compulsory” excitement when she was waving goodbye to Admetus from inside the impressive old hearse.

Johan Simons transformed Alcestis into the contemporary tragedy of a devastated woman in extremis, especially at the moment when she was bidding farewell to her family and to the hostile patriarchic world. With spasmodic movements of epileptic ecstasy, the distraught Alcestis (Anne Rietmeijer) lip-synched Vicky Leandros’s bittersweet ballad Ich liebe das Leben (1976) in front of a laughable Admetus who was holding fast to the button of his trousers. This old song was a huge success in Germany and the Netherlands precisely because it reimagined the erotic naïveté of the touristic Greece of the seventies, but Rietmeijer’s Alcestis, by singing “Lai-lai-lai-lai, la-lai-da-di-dai,” rendered her sacrifice as incomprehensible and absurd as any other “sacrifice” of a woman living in a heteronormative world. Given also that the song is about another heartbreaking breakup of a woman living in a world that turns like a carousel, the director made a comment on all the abused women who were forced to “love life” because their heterosexual Admetus had to firmly hold on to his willy.

The failure of manhood was another prominent element in Simons’ directorial ideology—an element that is also rooted in the mythology of the play. When Admetus married the parthenos (virgin) Alcestis, he failed to sacrifice to Artemis, goddess of virgins, destining him for early death. This death was averted by Alcestis’ sacrifice, which Simons saw as a productive field for postfeminist criticism. After the death of Simons’ newly devastated Alcestis, Admetus and his two children stand silent next to a drying rack which carries the swimsuits of their dead mother and wife. From his first appearance, Admetus had been directed as a clownish toxic male who did not have the guts to die heroically, especially at the moment when he was singing Lee Hazlewood’s American countryanthem For One Moment You Were Mine (1966) like a failed cowboy.

Very typical, but always crucial, was also the deposition of Hercules from his heroic status, an element that also exists in Euripides’ text. Pierre Bokma’s robust Hercules (with a backpack on his shoulders, as if he were a tourist in the Greek islands) comes on stage in a flowery caftan and a long-sleeved shirt, angrily proclaiming his toxic masculinity. Immediately after, the Nurse brings him a crate of beer to get drunk like the comic Hercules of Euripides.

Even if these images seem very paleo-postmodern in their kitsch aestheticism and parodic bravado, they are still effective in destabilizing old interpretations, thereby offering a way to rethink and transform Greek drama in accordance with new social conflicts and demands. By the end of the performance, Alcestis’ daughter is forced by her father to wear a red bra over her little dress in order to continue the legacy of her mother and become another “good woman.” The little girl stares speechless at her dad, like all those women who were abused and silenced by patriarchy.

Generally, the cast moved with extraordinary fluency in the familiar post-Brechtian style of German-speaking theatre, resorting to the recognizable emotional expressiveness of vocal exaggeration (though with less physical hysteria and certainly well away from cold delivery). The very histrionic Apollo (Viktor IJdens) and the hunchbacked Death (Lukas von der Lühe) who clean the windows of the hearse, opened the performance in quiet comic tones which gave the (false) impression of a very ordinary, if not boring, performance to come. However, with the entrance of the disco-queen Nurse (Elsie de Brauw) the climate shifts to high-level sentimentality. Anne Rietmeijer’s apt Alcestis is presented at first like a dreamy, faltering shadow of a woman in a purple negligée. In the farewell scene, however, she was inflamed ecstatically by the rage of a devastated woman.

Steven Scharf gave an impressive Admetus as a buffoonish, emotionally unstable male with a feigned heartbreak for his wife, becoming an image of dynamic criticism for all those unbearable ancient men. In the same vein, Stefan Hunstein’s angry Pheres, father of Admetus, followed the text in the trope of a tragicomic Muppet Show. As far as the Chorus is concerned, Simons treated the choral songs of the tragedy as choral parts for a motionless Choir of two operatic sopranos and two altos with impressive voices (Antonia Busse, Natalija Radosavljevic, Sarah-Léna Winterberg, Luzia Ostermann) in place of the Euripidean chorus of local men from the kingdom of Admetus. Steven Prengels’s music, with its eerie passivity and playful bursts, recalled the atmosphere of Christoph Willibald Gluck’s Alceste (1767), although the seated and—occasionally—walking Chorus appeared to be merely musical decoration, next to a church organ that was standing on stage like the totem of a perpetually playful divinity.

The translation, by the Canadian poet and Hellenist Anne Carson, re-edited into German (losing, perhaps, its true poetic lyricism, but retaining its Hitchcockian mood), was yet another productive departure from the vain hopes of authenticity. The folkloric setting of Johannes Schütz and the glam-kitsch costumes of Greta Goiris built an ironic landscape of disenchantment. Bernd Felder’s elaborate lighting design (as if you were sitting in a Greek tavern of the seventies) set the atmosphere with a thespian irony and the hedonism of a deadly green night.

Johan Simons and his ensemble came to Epidaurus like wandering nomads who camped comfortably on the open ground of a classical text, reclaiming the ancient theatre as an atopia that needs to be fed with new interpretations. But in doing so, the performance achieved something more important. It made an impressive political comment on womanhood for the century of the #metoo and new feminist movements.

*George Sampatakakis (MPhil., Cambridge; PhD, London) is Associate Professor of Drama and Performance at the Department of Theatre Studies, University of Patras, Greece. His areas of specialization include the reception of ancient Greek Drama, theatre theories, theatre acting and directing, and queer theory. Webpage: upatras.academia.edu/GEORGSAMPATAKAKIS.