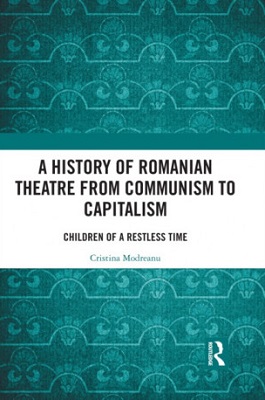 This book, billed as a volume that fills a considerable gap in Romanian theatre discourse, does indeed deliver precisely that: an up-to-date and nuanced account of the last three decades in Romanian theatre. As a theatre critic, curator and scholar,Cristina  Modreanu is closely familiar with the trials and tribulations of the theatre scene in Romania and, at the same time, holds up-to-date information about global trends and practices.

An openness and curiosity towards the latter is a key aspect of the book, and Modreanu’s ambition is to document the work of artists and theatres in Romania also with a view to their connections to the international stage – as Frank Hentschker notes in his foreword to the book: “Romanian theatre is unique, yet not so different from the rest of the world” (p. x.)

Like Modreanu, in the three decades since the Romanian Revolution, many theatre and performance artists have endeavoured to (re)align themselves with current trends in Europe and beyond and to find a space for their practice in a diverse cultural landscape. The book charts these approaches in detail, and most importantly, embeds the discussion into a broader conversation about the relationship between art/artists and (political) power.

When addressing contemporary theatre and performance culture in Romania, it is still important to refer back to the country’s emergence from totalitarian rule in December 1989 and to examine the conditions behind the former Iron Curtain. The work of many practitioners discussed in the book straddles both the communist and post-communist period, and Modreanu’s analysis unpacks the shift from one political regime to the other, with an aim to examine the relevance of the practice both historically and in the here and now.

In order to clarify these transformations, the entire Romanian theatre system comes under scrutiny, together with a discussion of funding, remits, organisational structures and audience patterns. Modreanu contends (p. 91) that the co-existence of state-funded and independent theatres has resulted in two radically opposed cultures: the former benefitting from financial security yet generally steering clear of risk-taking approaches, the latter, battling an ongoing lack of financial means but passionate about fresh topics and innovative means of expression. This accurate observation underpins the detailed commentaries deployed in the various chapters, and as the book progresses, the gradual shift from one mode of operation gives way to another.

The book is structured into ten chapters, organised in a chronological fashion, starting with a substantial discussion of the changes in Romania’s theatre before and after 1989, and then continuing with focused analyses of some of the most emblematic and influential theatre artists of the last few decades. The introductory contextual chapter acknowledges the contribution of precursors such as Liviu Ciulei, Lucian Pintilie, Radu Penciuescu, Alexandru Tocilescu and Vlad Mugur, and highlights some of their most radical productions that constituted a bold anti-communist stance in the 1969s and 1970s, challenging the tolerance limit of communist censorship and leading to outright bans and/or the exile of the creatives in question.

The risk-taking and innovative theatre language introduced by these seminal directors, however, has paved the way for subsequent generations of non-compromising figures, many of whom are still active and are at the centre of the book’s analysis. Modreanu dedicates self-standing chapters to Andrei Şerban, Silviu Purcărete and Mihai Măniuţiu, and signals the stellar careers of these illustrious directors by her chapter titles: Şerban being labelled a prophet, Purcărete a visionary, while Măniuţiu is associated with the politically charged notion of coming to terms with the legacy of communism via an ongoing trial. All three directors have in common a solid international presence and a body of work that includes exemplary productions of canonical texts as well as more experimental and risk-taking pieces that have drawn attention to the potential of site-specificity and the integration of non-conventional spaces.

That said, these exponents of the most senior generation of directors still working today, have forged their careers in (relatively) securely funded theatre institutions and have occupied managerial positions themselves. They have also worked very closely with regular ensembles, with whom they have perfected highly efficient collaborative methods.

Chapter 5 addresses the “alternative path” of Radu Afrim, an exponent of the middle generation who navigates smoothly between the world of state-funded and independent theatres and has managed to gain the respect of the theatre establishment and younger theatre-makers and audiences alike. Considered the most talented director of his generation, Afrim stages both author-attributed and collaboratively devised pieces with equal ease, and Modreanu talks about his “rock star” status (p. 58) and pinpoints the director’s niche interest in the life of marginal characters, rooted not so much in reality but a dreamland of sorts. Firmly abandoning the still influential Stanislavskian influence, Afrim favours music/song and the distortion of language in order to conjure up a “parallel universe which turns out to be the one to enrich our lives” (p. 59).

In chapter 7 a solo portrait is granted to the only truly high-profile female theatre artist in Romania, Gianina Cărbunariu, who came to prominence as the co-founder of the platform for new writing dramAcum (dramaNow), which, as Modreanu argues, can also be interpreted as “theatre of urgency” in its preoccupation with confronting real problems of everyday life (p. 66). Cărbunariu, who writes and directs her material, is the author of Stop the Tempo (2003), a work that achieved manifesto status for a generation educated after the communist era, and of numerous other productions with a bold social and political remit. She is currently also the manager of the Piatra Neamţ Youth Theatre, thus straddling the independent and subsidised sector.

The remainder of the chapters bring together discussions of several artists side by side, highlighting synergies and collaborations, much more dominant among younger creatives. This cluster is particularly significant as most of the practitioners included here have not benefitted from extended critical coverage at such a comprehensive level before in international publications.

Chapter 6 brings up the work of Cărbunariu again, in the context of braiding ethics and aesthetics in the theatre, where her practice is examined alongside that of Bogdan Georgescu and David Schwartz. This chapter looks at the complexities of being an ethically committed theatre artist and addresses forms of contemporary political theatre, including collaborative creation, social activism and documentary theatre. For their preoccupation with dramatizing and bringing reality on stage, Modreanu positions Bogdan Georgescu as the closest to Carol Martin’s notion of “theatre of the real” (p. 77).

Chapter 8 continues the focus on independent theatre and offers a discussion of attempts at participatory theatre, a relatively new art form in Romania, via the examples of Alexandru Berceanu, Cinty Ionescu and Peter Kerek, also drawing on the work of Mihaela Michailov and Ioana Păun. Interdisciplinary practices and multimedia art is becoming increasingly popular, and the artists highlighted in this chapter and in chapter 9 fuse theatre with film, live music, folklore, ethnography and choreography among others. The single-authored dramatic texts is less and less visible in this work, or in case it is present, it is a blueprint for performance and the focus is on collaborative creation with the promotion of an agenda rooted in feminism and identity politics.

Modreanu connects her discussion of feminist theatre, via the case studies of Catinca Drăgănescu, Ioana Păun, Carmen Lidia Vidu, with re-imagining twenty-first century theatre, hence arguing for progress, transformation and radical change in a concerted effort to challenge sexism, domestic violence, and sexual abuse in society. The context for this chapter is provided by a curatorial project Modreanu herself has carried out, in the shape of invited responses to key Ibsen plays. Though the selection of artists is (unavoidably) limited by the scope of this project, this chapter is nonetheless representative of the field and is able to capitalize on the opportunity to discuss devised theatre, a relatively rare occurrence in Romanian theatre.

This last chapter is additionally significant as several high-profile cases of abuse have rocked the Romanian theatre world, and not enough has been done to eradicate sexual double standards as a leftover privilege of the communist era, even if, in the wake of the #MeToo movement, a long overdue examination of corruption and abuse of power has started.

The book concludes with a much-needed mapping of contemporary Romanian playwriting that surveys key authors across generations (e.g. Alina Nelega, András Visky, Elise Wilk, Csaba Székely, Mihaela Drăgan as well as expats such as Matei Vişniec, Alexandra Badea, Peca Ştefan, Saviana Stănescu) and an epilogue that sums up the very unique journey that Romanian society has travelled from communism to post-capitalism.

Modreanu has conducted meticulous research and has covered extensive ground. Her choices in terms of case studies are solid. The only major figure whose presentation could have been perhaps expanded a little is Gábor Tompa, artistic director of the Hungarian Theatre of Cluj and initiator and lead curator of the biannual Interferences Theatre Festival. As one of the only two Romanian UTE members (Union des Théâtres de l’Europe), the company led by Tompa is a trailblazer in the Romanian theatre landscape due to its extensive touring and regular work with visiting practitioners, and Tompa himself is one most longstanding and innovative directors in Romania with a solid international reputation.

That said, Cristina Modreanu’s highly informative and engaging book is an absolute joy to read and will hopefully invite further scrutiny, to compensate for the fact that Silviu Purcărete was the only Romanian name mentioned by Hans-Thies Lehmann in his landmark Postdramatic Theatre.

This clearly structured and meticulous study will be of interest to scholars and students of contemporary theatre and history, as well as to international theatre practitioners wishing to broaden their insight into lesser known yet distinct and fascinating theatre traditions.

*Jozefina Komporaly is senior lecturer in the School of Performance, University of the Arts in London, and a translator of Romanian and Hungarian literature and drama into English. Her latest publication is the critical anthology Plays from Romania: Dramaturgies of Subversion (Bloomsbury, 2021). Her website is ‪https://jozefinakomporaly.com/.