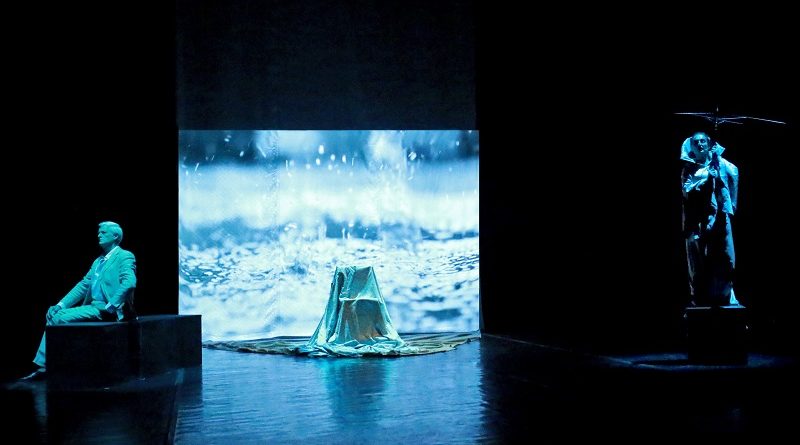 The second edition of the Verona Shakespeare Fringe Festival took place in Verona, Italy, the city of Romeo and Juliet, in August 2022. Theatre companies from all over the world presented their most interesting experimental works, with a view to an intercultural exchange. This review is dedicated to Enter Hamlet, the opening show of the festival, produced by Athens-based Persona Theatre Company. It was written and directed by Greek theatre director Avra ​​Sidiropoulou, who drew from the tragedy of Hamlet to create a complex, intermedial tapestry on the themes of memory, oblivion, complex relationships with the past and the light and shade of our inner world.

Elena Pellone plays Hamlet in a white loose costume reminiscent of Renaissance geometries and a hybrid dimension, as all gender categories become meaningless: Hamlet is a man, a woman, perhaps both and neither, able to alternate between fits of anger, jarring words full of spite and moments of extreme sweetness.

He/she is alone on stage (occasionally accompanied by Eric Nicholson, mainly a silent presence). His/her unmoored inner world, where everything is fluid and changing, unfolds before us. The title Enter Hamlet refers to the stage directions in Shakespeare’s text: here, Hamlet enters from a “beyond” place; now it is his turn to speak. Where is he coming from? Where is he going? Has everything already happened or is it about to happen again? Why has he come back to visit us? Sidiropoulou creates an experimental play using an ultra-contemporary and inter-medial language to shed new light on this Shakespearean masterpiece. Her text (in English) is a new original script, less than an hour in duration, entirely recontextualized in a modern-day setting. It does borrow some emblematic phrases from Hamlet (about ten per cent of the script) to create a layer of intertextuality that heightens the fundamental conflict of the play (memory versus oblivion). The action evolves across the four seasons. In each of these, a lonely restless Hamlet moves from one physical station to another, struggling to shake off the burden of his failed relationships (with his mother, his uncle, his lover, his history and himself).

This play is a sound reflection on time. Hamlet is a contemporary character, but his “present” is a kaleidoscope of hallucinatory re-enactments of the “past.” He grimly sums up his condition in the impressive beginning: the king is dead, poisoned by Hamlet’s uncle, who has since married his mother: a subversion that seems to involve the whole universe (“all is sick—the land and our soul”). Since then, Hamlet has been struggling with himself to keep the images of the past alive. He has become the guardian of his own history (“I am to keep alive everything that’s passed”), a victim and victimizer, because memories are painful. Memory keeps getting out of control; its struggle goes on and on, as the return of ghostly memories is highlighted by the vocalizing of French musician Muriel Louveau. Will the wheel turn full circle?

In the contemporary wasteland, Ηamlet’s journey is both mental and spatial: in a train carriage, in a square near a homeless man, in a ballroom, in the snow or among the flowers of a garden. The Italian public was impressed by the minimalist stage design (sets and costume by Emmanouela Vogiatzaki-Krukowski): an empty throne covered by an off-white drapery, four cubes and a screen.

During Hamlet’s monologue, a series of fleeting video images outline his mental world: some images lead to the perception of an immersive effect (water, snow, petals), others create an alienating sense (hands, mouths, changing shapes). In the meantime, Hamlet moves the cubes, as if to build a fence around his own memories, or to give order to their scattered pieces with calm resignation or an eager desire for change. The cubes build narrative-emotional situations acted out by Hamlet: there he is, standing as if on a pedestal, or sitting on a bench waiting, or again lying down day-dreaming or waltzing away.

The skillful dialogue of lights and video images (by George Sifakis and Artemis Tzavra-Bulloch, respectively), lighting up Hamlet’s body, plays impressively with the effect of reality and at the same time dematerializes his body on stage. Finally, the music (beautiful compositions by Vanias Apergis), performed live by Alessandra Bonetti, plays a major role in generating lyricism and emotional tension. Sidiropoulou’s Hamlet rejects the hypocritical and indifferent world: the passing crowds of conformists protect themselves from thunderstorms with their umbrellas, as if rain could dissolve their masks of deceit, whereas he holds a broken one, a sign of both his vulnerability and his purity.

His life is a permanent escape from ghosts: his sensual mother terrified of old age, his repulsive uncle representing the insatiable thirst for power, Ophelia’s love and, his greatest torment, the complex confrontation with his father. Hamlet begs him to let him go beyond, to be allowed to conquer his own place in the world. However, it would be too reductive to interpret his conflict only in terms of an act of rebellion against authority in order to find himself. We should not forget that Sidiropoulou is Greek, and therefore she works on the poetic lexicon of complexity.

Perhaps the key to Hamlet’s torment lies in the reinterpretation of the most famous dilemma in the history of the theatre: “to be or not to be.” In fact, the character reinforces and completes the question: “To be forgetting? / To not be remembering?” that is: to exist in a peaceful oblivion or to perpetuate memory, being condemned to a non-life? These questions are in line with the current debate on the limits of memory and the need for oblivion, under certain conditions.

In the final scene, all the characters in Hamlet’s mind gather around him: they ask him to join them, to go back and continue the torture of memory. Horatio’s voice stands out: “Turn your back to us, my friend. Forget us all!” Of all characters, Horatio, Hamlet’s friend, who in Shakespeare’s original play has the task of explaining the story of the unhappy prince of Denmark, now recommends the peace of oblivion.

How Greek is this Hamlet, prisoner of his memory, a memory that attacks him with the colorful shadows on the screen? Is there a platonic background? The director explained:

Perhaps this Hamlet could also represent the tormented soul of the modern Greek people, constantly striving with their own history and past. Perhaps traces of Plato’s influence exist in Hamlet’s aspiration towards the ideal and utopia: this Hamlet struggles to overcome everyday routines, the vulgarity, and the seduction of power, in which the other characters are entangled.

The end of the performance is cathartic, bitter and remarkably innovative. Hamlet puts on the royal mantle that is lying on the throne, with the assistance of the silent actor who has performed the role of his father’s ghost. This is a symbolic gesture, indicating an intermedial embrace: the long train of the costume in fact is an integral part and a continuation of the screen sheet. In a symbolic coup de théâtre, Hamlet gets dressed in his family’s shadows (screen and mental projections), thus embracing now the ghosts that haunt him. Will he take the reins of his kingdom, accessing a scarred memory that will no longer open to the abyss of pain? Probably not: Hamlet will wrap himself in an iconic cocoon, realizing that oblivion will never take place. “Forget us not” is the last invitation he extends to the audience during his ceremonial exit. Let’s not forget Hamlet, his past and present torments. Ultimately, it is up to the audience to activate their theatrical memory and keep universal questions alive.

*Gilda Tentorio, after PhD in Classics, works as teacher in Modern Greek Language and Literature at Pavia University and Milan University in Italy. She studies postmodern trends and the presence of ancient myth in contemporary Greek theatre. She edited (with Theodore Grammatas) the special issue about Greek theatre in “Culture Teatrali” (2014). Her papers in academic journals deal with European and Greek contemporary theatre, Epidaurus Festivals, reception of ancient drama, crisis and theatre. She also translates modern Greek literature into Italian.