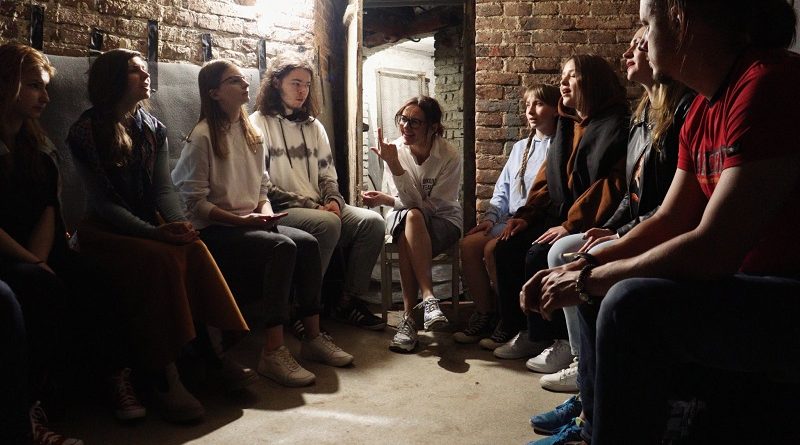 The essay provides an urgent survey of the theatrical landscape in Ukraine in 2022. It discusses new theatre roles that emerged in Ukraine after the 24th of February invasion. It argues for reading these new functions in the context of a humanitarian mission. Moving her gaze from Western to Eastern Ukraine, the author explores how theatre has led the humanitarian mission, providing food, shelters and temporary homes. At the same time, Harbuziuk reveals how theatre institutions, artists, and audiences adapted to the new realities finding resilience and purpose to perform and create.

Theatre is the art about humans, by humans, with humans and for humans. But when war breaks out in your country; when thousands of your compatriots are killed and millions of people become refugees; when theatre buildings with hundreds of people hiding inside are bombed, what does the theatre community do? ​Can there be a theatre in this terrible war reality?

After February 24th, all of us in Ukraine experienced a shock. It resulted in the total silence that lasted for a few days, maybe a week. During this short time, Ukrainian theatre reconsidered itself, its place and its possibilities. The first step was mobilization. Theatre artists volunteered to join the army. Nowadays, they are part of our army.

Many artists are fighting on the frontline now. Among them are directors Oleksiy Kravchuk, Ihor Zadniprianyj, Dmytro Husakov, Roman Valko, Akhtem Seitablayev, Anton Romanov, Andriy Romanov; actors Andriy Petruk, Nazar Pavlyk, Oleksandr Mishchuk, Sergiy Klymenko and others. They are soldiers with javelins or Stingers (a portable air-defense system) in their hands. Their experience will be described in the future, in future performances, plays, texts, et cetera. We pray for them every morning. But I want to focus on another Ukrainian theatre mission, which was discovered at the beginning of the war. It is a humanitarian mission. I want to highlight the new theatre’s functions that emerged in Ukraine after February 24th.

Theatre as a Volunteer

The Russian invasion of Ukraine broke out at the eastern, northern and southern borders, which is why Ukrainian theatres and artists working in those regions stopped their activities and had to save their lives. And this is why the theatre community in the West and Central regions of Ukraine began working in a new role.

When the thousands of internally displaced people (IDPs) fled from the East to the West of Ukraine, the theatres near the western border (Zakarpatska, Lvivska, Ivano-Frankivska, Ternopilska regions) were transformed into volunteer hubs. Thousands of people have been going through these centres since February 24th.

These volunteer centres have carried out many activities:

The creative staff, administration, technicians and workshops as individuals and a team have had to master many new skills and abilities: logistical, communication, managerial, psychological and so on. Theatres have become an integral part of a vast volunteer network helping Ukraine.

While volunteering, many theatres have become a refuge for all who have been left homeless. The theatres opened their dressing rooms, tech rooms and additional spaces for the temporarily displaced people. After escaping the shelling and bombing, the IDPs had a chance to sleep, eat, wash, rest and get clothes and food free of charge. For example, the Les Kurbas Lviv Academic Theatre shelter was arranged on the stage. The space where William Shakespeare, Tennessee Williams, Martin McDonagh were performed before the war became a place of refuge for nearly a thousand people. The actors became service personnel who enabled the functioning of the shelter. Oleksanra Shutova, the literary director of this theatre, emphasized that actors are incredibly empathic people and had a unique psychological sense of when and how to talk to shelter residents, especially children.

Theatre as a Bomb Shelter

Most theatres in Ukraine have good basements. Since the beginning of the full-scale war, bomb shelters have been set up there. There were theatre workers, refugees or passers-by, who were caught by an air strike alert in the street. In Ivano-Frankivsk, all residents of the city’s central part go to the Ivan Franko theatre’s basement because it is the only reliable bomb shelter. The director of the theatre, Rostyslav Derzhypilskyi, mentioned that they came up with the idea to play the performances during the air strike alert in the bomb shelter. And by doing so, they wanted to distract people and help them cope with fear and stress. Thus, on March 7th, two weeks after the beginning of the full-scale war, the Ivan Franko National Academic Music and Drama Theatre in Ivano-Frankivsk reopened in a bomb shelter. This was the first Ukrainian theatre to reopen.

In the theatre repertoire, there is a performance that didn’t need any adaptation to the basement space. Hamlet, a new horror opera composed by Roman Hryhoriiv, Illia Razumejko and Rostyslav Derzhypilskiy was staged at the Ivan Franko theatre five years ago as a performance in the basement, under the stage. Shakespeare`s Hamlet and Romeo and Juliet, Eneida by Ivan Kotlarevskiy and other iconic performances of this theatre were adapted for this specific place. The theatre allocated 50 free seats for displaced spectators for each performance. All spectators can watch the performances without a break for the air strike alert because they are already in the theatre-bomb-shelter. Lesia Ukrainka Lviv Theatre organized “anti-stress workshops” in their bomb shelter. There are still performances and stage readings in the basement of the Lviv Academic Puppet Theatre.

In April, in Kharkiv, not far from the front line, the Academic State Puppet Theatre of Afanasiev began to perform in the subways for children who lived there with their parents, escaping from the bombing. Musicians and poets also performed at these metro stations that became a home for thousands of Kharkiv residents.

Theatres as Theatres in the New Reality of the War

Gradually, from the beginning of April 2022, theatres in western Ukraine began to return to their regular activities. This transition was challenging. It was unknown whether our community today needs a theatre as such, whether spectators would come to the performances and whether the productions created before the war would be successful. And there were no new works since the end of February. But, gradually, we became convinced that the theatre became necessary as a cultural institution, a component of ordinary life and a place of collective therapy and mutual support. It was important to support those theatrical artists whose theatres ended up in the occupied territory or the combat zone. Thus, Artem Vusyk moved from Kharkiv to Lviv and created a new independent theatre, Varta. A part of the Mariupol Theatre team has moved to Uzhhorod and has already started its new season with the performance by poet Vasyl Stus.

The 24th International Theatre Festival Melpomene of Tauria: Voices of Kherson Region, was held in June. More than thirty theatres from different cities in Ukraine, Poland, Romania, Portugal and Georgia played performances in their theatrical venues in support of one of the most famous Ukrainian festivals and the Kherson region.

The war asks new issues related to decolonizing the Ukrainian theatrical space, which historically depended on Russia. It is a question of changing the repertoire, rediscovering and rethinking our national theatrical achievements and writing the decolonized history of Ukrainian theatre. And, of course, it is about the return of Ukrainian theatre to the European cultural space. It emerged from this space more than four centuries ago and is genetically and mentally connected.

In conclusion, I will quote my colleague Yana Partola: a theatre critic and the Dean of the Theatre Faculty at the Kharkiv National Kotlyarevsky University of Arts. On March 3rd, hiding in the Kharkiv subway with her daughter and mother from continuous shelling, she wrote on Facebook:

We’ll never be the same again. This world will never be the same. Do we realize what these words really mean? Do we imagine what this uncertain world will be like, what place we will take in it, and what we will eventually be? And now we’re all refugees. It doesn’t matter if this bloody war has forced us to leave our homes, or sit in cold and dark cellars, or volunteer, or bravely defend our land. We are all torn out of our lives, and it is unknown whether we will return to former worries and entertainment. But now, there is also a place for love and devotion, care and sincerity, warmth, and devotion.

Ukrainian theatre demonstrates this love and devotion on the stage and beyond it.

*Maiia Harbuziuk is a theatre historian and critic. She is the Dean of the Faculty of Culture and Arts at the Ivan Franko National University of Lviv; editor-in-Chief of the theatre magazine Proscaenium published by the Ivan Franko National University; and the Chairwoman of the Theatre Studies Commission of the Shevchenko Scientific Society. Harbuziuk wrote and co-wrote numerous monographs and more than 240 articles on the history and theory of theatre.