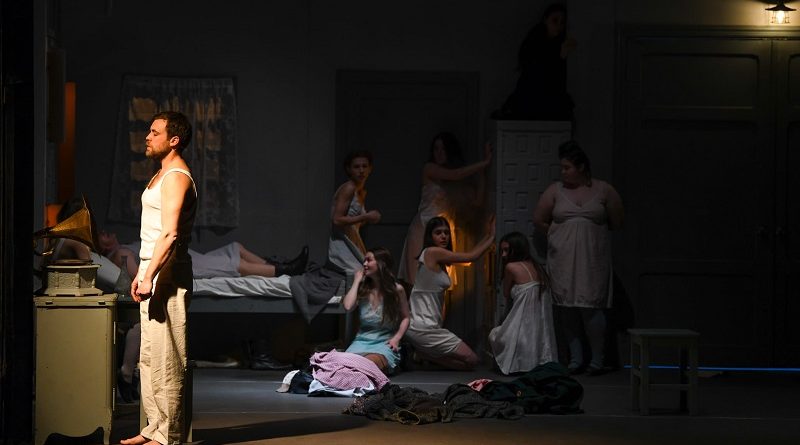 130 years since the inauguration of the building of The North Theatre Satu Mare, January 14–17, 2022, Romania.

The beginning of 2022 brought the theatre community of Romania to the north-western part of the country, to Satu Mare, a city located 13 km from the border with Hungary and 27 km from the border with Ukraine. We were still wearing masks but were hoping that the pandemic was coming to an end. At that time, we did not know what was to come . . . We were happy to be together at a celebration: 130 years since the inauguration of the building of The North Theatre that hosts both a Romanian Company, “Mihai Raicu,” and a Hungarian one, “Harag György.” We know that the theatre is not a building—Peter Brook has told us so, ever since the last century, but the celebration brought to our attention the spirit of this theatre as a survivor.

The North Theatre has been set on fire, bombed, closed by the Nazis and by the communists. The most difficult time was not when it was bombed, but most probably when it was abandoned. All that was left was a sumptuous hall, with gilded stucco, draped with velvet, where ghost-like theatre companies touring in the region performed from time to time. Nothing sadder for a theatre than to be deprived of its life. I experienced a similar feeling during these two last years when the audience were not allowed in the venues. A theatre without spectators and without actors is just a building and its whole magnificence becomes somewhat ludicrous, hinting at the defeat of the spirit and of humanity”, confessed the Artistic Director, Ovidiu Caiţa.

The North Theatre has overcome these difficult times and survived to enhance the self-awareness of the Romanian-Hungarian community of Satu Mare for more than a century. Just as in the first inauguration on January 14, 1892, the first evening in 2022 presented a performance from Budapest, a joint production by the Hungarian National Theatre and the Romanian Târgu Mureş Spectrum Theatre. Goodwife Sára by Sarolta Döbrentei, directed by Attila Vidnyánszky (premiere: 2019) is a tale about life’s triumph over death, about the power of education and true faith.

At the beginning of a new century, in the old Kingdom of Hungary within the Austrian Empire, a married couple are burying their seventh child. Goodwife Sára (played by Andrea Söptei) has become indifferent, while her husband György (played by József Szarvas) is devastated. The prospect of having a child, which has been a blessing for others, has for them brought nothing but unending tragedy. The physician is incompetent, and the priest’s words are meaningless. A newcomer, however, comes to unsettle the life of this beleaguered community. He is an enlightened young man, whose incendiary words are to change Sára’s life. Instead of a blind and deaf God, she turns to the education which she has been deprived of. Her new pregnancy is accompanied by reading, and she gives birth to János Arany, who is to become one of Hungary’s greatest poets. An allegorical show, performed on a predominantly wooden set, which alludes to the coffins of the dead children as well as to the future cradle of the living child, born like Jesus in a barn (stage designer: László Székely). A mill is turning like the Wheel of Life, darkness alternates with light. Every now and then, a violinist crosses the stage (like the Fiddler on the Roof) musically commenting on the festivities and the funerals, the good and the evil, as in all rites of passage. An old-fashioned, seemingly dusty production, yet illustrating the respect nourished by certain communities for the past, for the ancestors, even if only in order to avoid their mistakes.

Mihály Vörösmarty’s masterpiece of a dramatic poem, Csongor and Tünde, is a productof nineteenth-century Romanticism. It was presented at the festival in a production of the Hungarian Company of The North Theatre, directed by Sardar Tagirovsky (premiere: 2021). It is a play that calls for free choice in both the personal and social spheres, a symbolic fairy tale, reminiscent of Shakespeare’s Midsummer Night’s Dream. This comparison is the starting point for the director, too, since the space recalls the famous Peter Brook production of the 1970s for the Royal Shakespeare Company, played in a white box, with no ceiling and no “fourth wall,” as a square circus arena where the fairies and the elves performed on trapeze swings. At Satu Mare, concentric cycloramas outline the performing space, while their doors and windows carry the characters to different worlds and times. The dominant white is coloured through the ample costumes, carefully created by Anna Kupás, characterizing the fairies and the devils, the clowns and the people. The characters are constantly moving, into the auditorium among the members of the audience, or to the heights, by means of video cams, or to the darkness, through the trapdoors of the stage. No space seems to be forgotten, and the images acquire a new visual force, like magic: the enchanted apple is an incandescent light bulb detached from the chandelier of the celebrated theatre. Throughout the whole performance, beside the proscenium, we find two actors watching the action, speechless and powerless: Vörösmarty himself and the young girl he was hopelessly in love with.

They lead us, though, to Csongor and Tünde’s romantic tale (literally and metaphorically), the love story that defies all obstacles—social, temporal, spatial—observed by the means of the twenty-first century, but with the patience of old times. The young director’s “appetite” for time, space and theatrical means highlights a united, well trained team, bringing out talent in individuals as well as in collective scenes.

The same values associated with team work and old texts are to be found also in the guest show from the National Theatre of Iaşi, The Town with Poor Girls, based on a dramatization by the maverick Romanian director Radu Afrim, after Radu Tudoran’s novel (premiere: 2020). Since the beginning of his career, this director has been interested in re-visiting the great classics—Shakespeare, Chekhov—creating his so-called “unnaturally free scripts.” A parallel direction in his work is his preoccupation with the “restitution and re-writing” of almost forgotten works from Romanian literature. Such is the case of the Iaşi production, in which, with the help of set designer Cosmin Florea, he recreates the familiar but still strange atmosphere of a town with poor girls, in a country with poor girls, full of sad poetry, a sadness as endless as poverty itself. A world is recreated on stage in a series of stories written and re-written—as if musically—for soloists and orchestra, for actors and ensemble.

Poverty breaks through from the girls’ ragged costumes, from their eyes, from their emaciated bodies (less the fishmonger’s daughter—remarkably well played by young Diana Vieru, who was granted the Romanian Association of Theatre Professionals UNITER Award for “Best Actress in a Supporting Role”). It is cold in the town with poor girls: the costumes display cold colours, so does the lighting design. The music is heartbreaking, like piano teardrops. The stories are sad, even if the girls still keep their sense of humour. They ooze eroticism and sexuality, bursting like buds in spring, full of love, more or less consensual. Foreigners are welcome in the city, perhaps they can tame the poverty, but they will not be integrated. In contrast, the great achievement of director Afrim, irrespective of the city in which he is working, is that he integrates himself and he integrates the teams that are working with him.

The last evening of this mini-festival belonged to the Romanian company of The North Theatre: The Anatomy of a Perfect Wave by Stela Giurgeanu, a production directed by Tudor Dreve (premiere: 2021). Isolation is the theme of this play, winner of a drama competition entitled The Island. “The period we are living in has forced us into a sort of rendezvous with the demons within us, a compact clump of fears, insecurities, envies and resentment, deeply buried, hidden in the farthest corners of our being, hidden from others, but also from us,” says the author. Two couples from two generations are isolated on a sandy island, where only poppy flowers and carrots grow. Debutant in set design, Mihai Şarpe fairly recreates the space, through evocative elements of decoration. The water is sensed at a distance: we hear it, we hear the waves among the electric guitar sounds. Along with the four characters, we are waiting for “the perfect wave.” It will eventually come in the form of a mermaid, but it will bring fear, not deliverance. The fear of looking into our eyes and souls, where we may discover an ego deformed by vice, a stranger to be expelled. Philosophical here and there, the text gives generous opportunities to the actors of the “Mihai Raicu” Company.

A theatre does not exist only through its performance spaces, the building, but through the people who have served The North Theatre in Satu Mare in all these 130 years. We watch and acclaim the present ones on stage, we can see yesterday’s ones in a touching exhibition, and we can look forward to the future ones with hope.

*Maria Zărnescu, PhD (b. 1969, Bucharest) is a Romanian theatre theorist and critic, Associate Professor at the National University of Theatrical Arts and Cinematography “I.L. Caragiale” Bucharest. Author of books: Music and Muses (2015) and The Sound of Theatre Music (2016). Theatrical and musical reviews, studies and essays published in Romanian and international journals. The Romanian Association of Theatre Professionals UNITER Award for “Best Theatre Critic”in 2015.